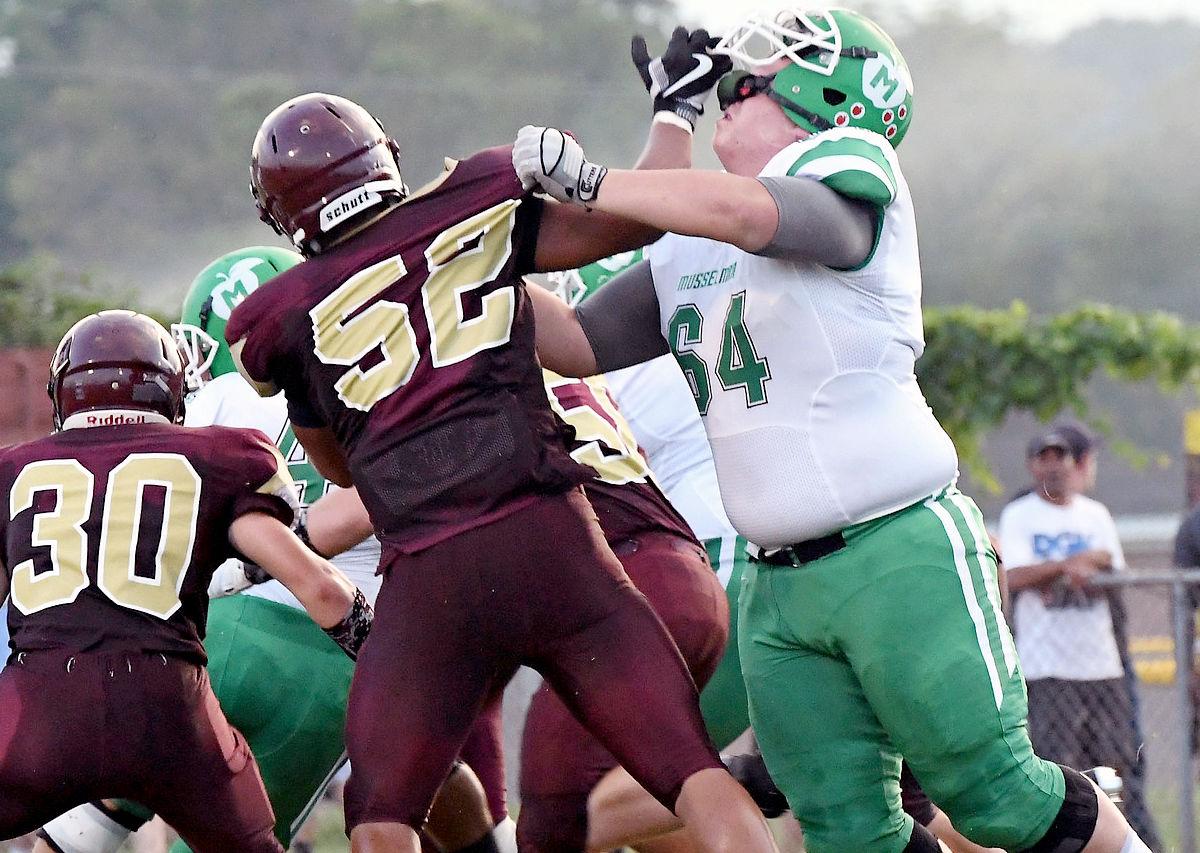 Jevon Lang smacks the helmet off a Musselman lineman. 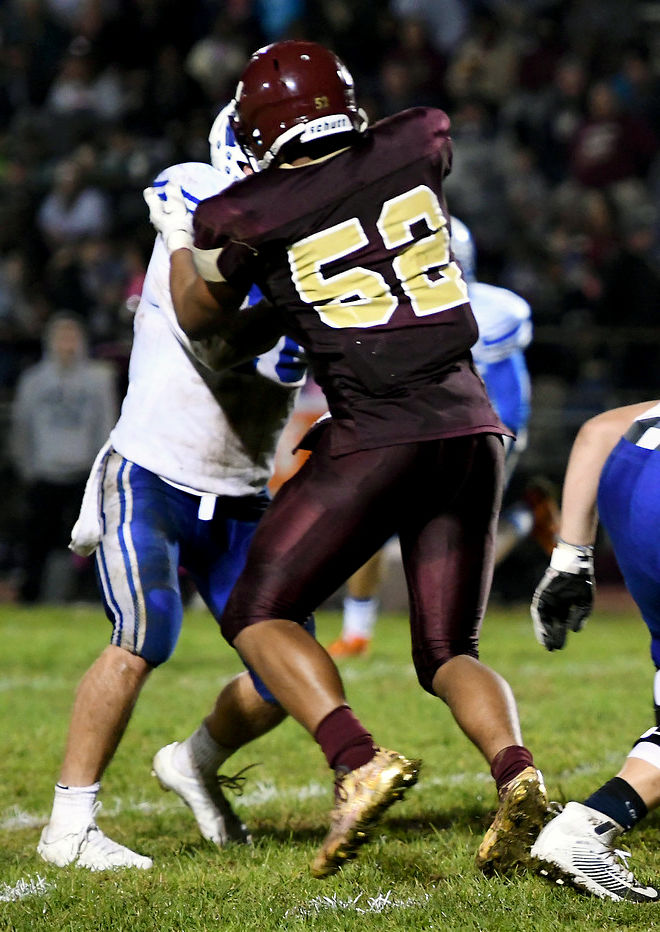 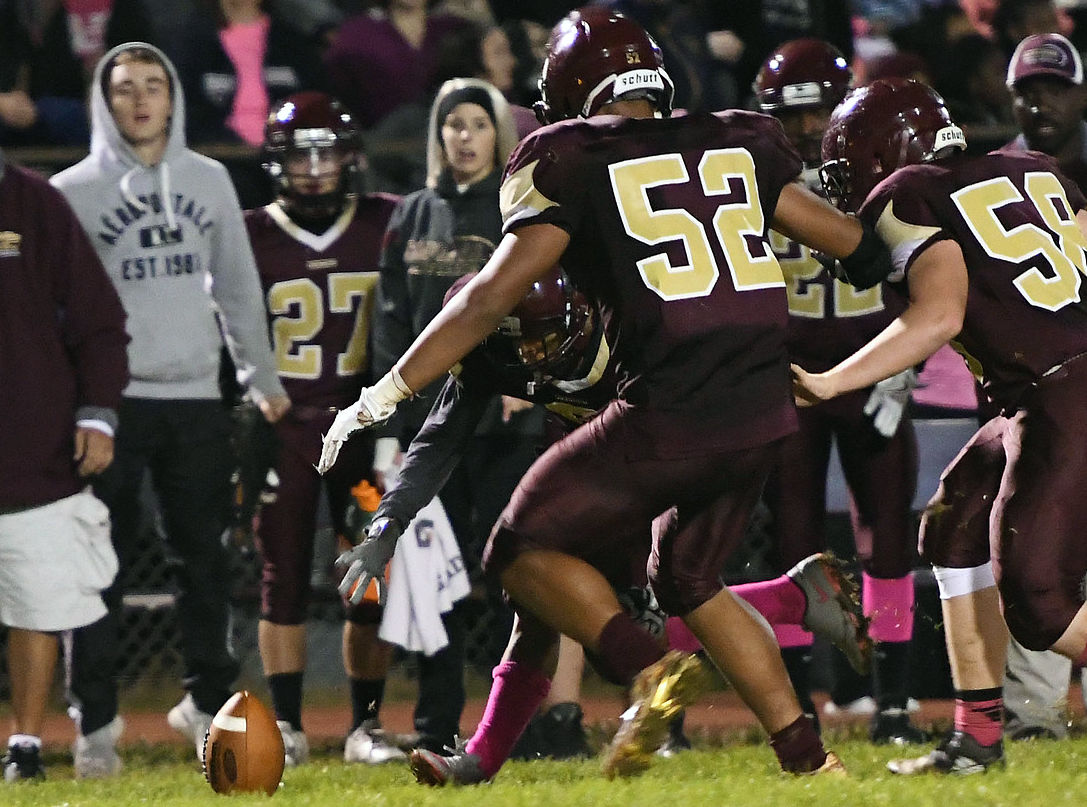 Jevon Lang provides space for his teammates to jump on a loose ball. 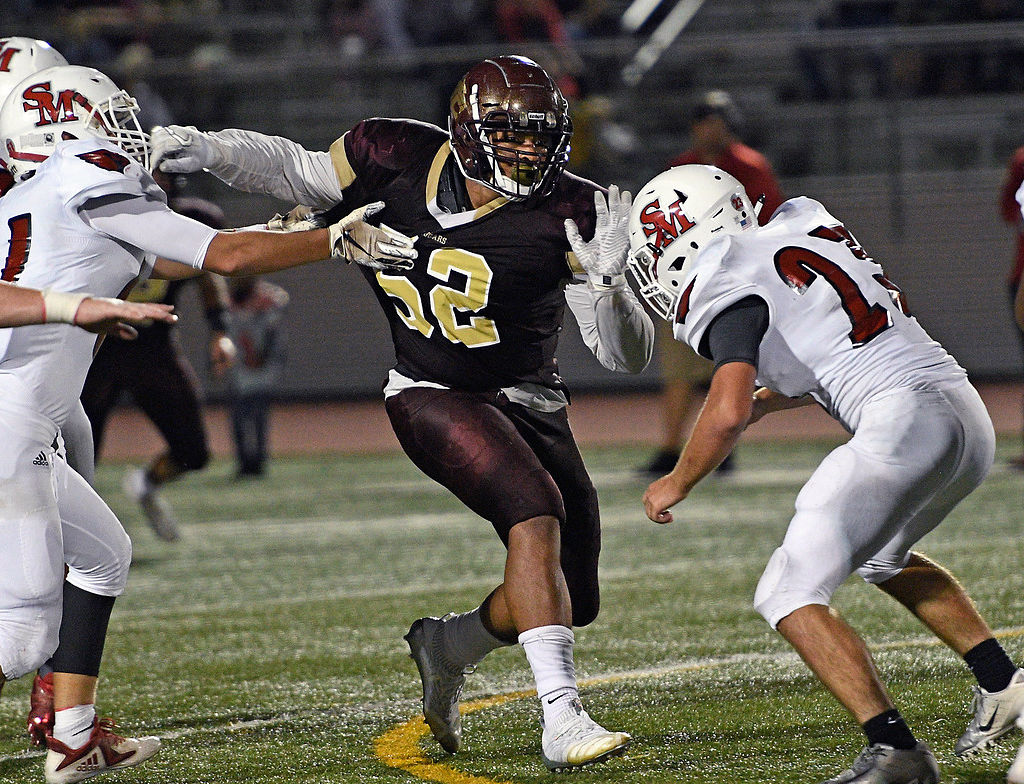 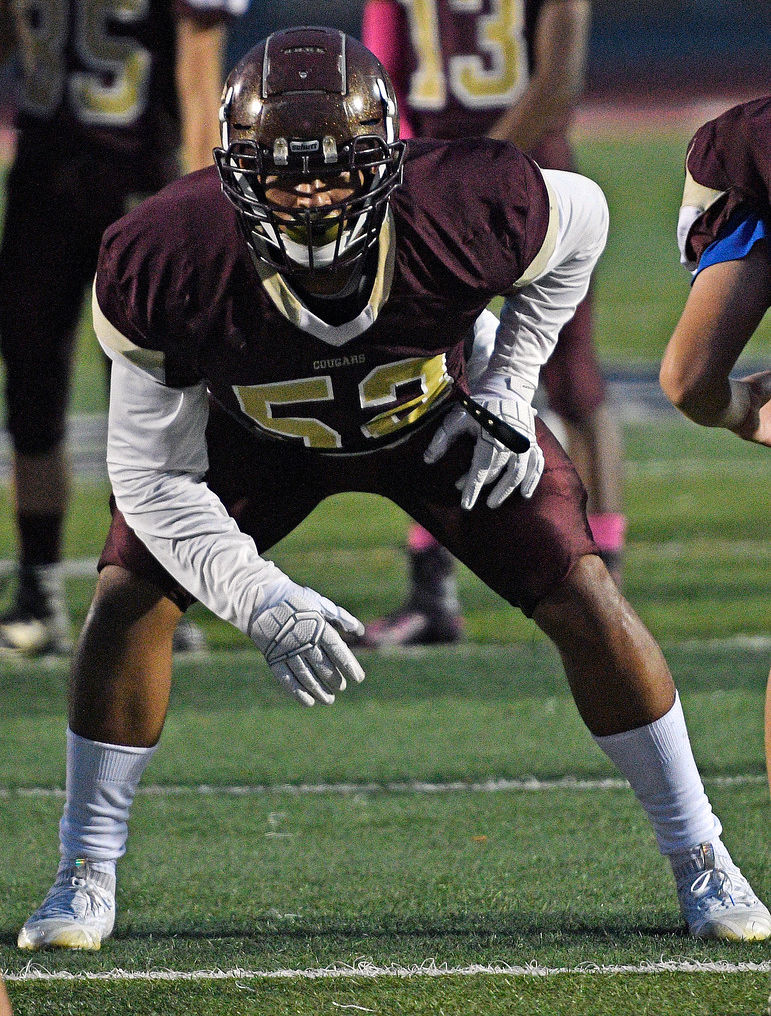 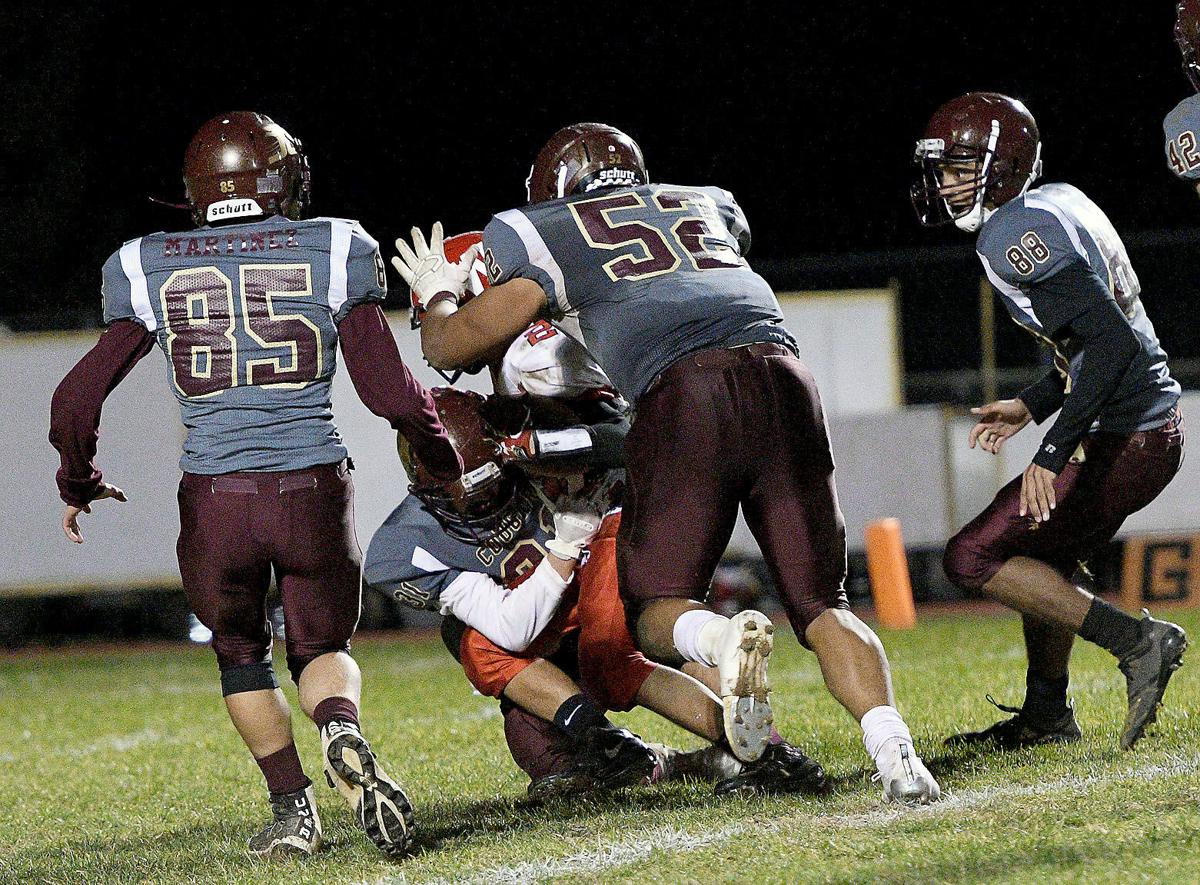 Jevon Lang assists in a tackle in the cross county rivalry game. 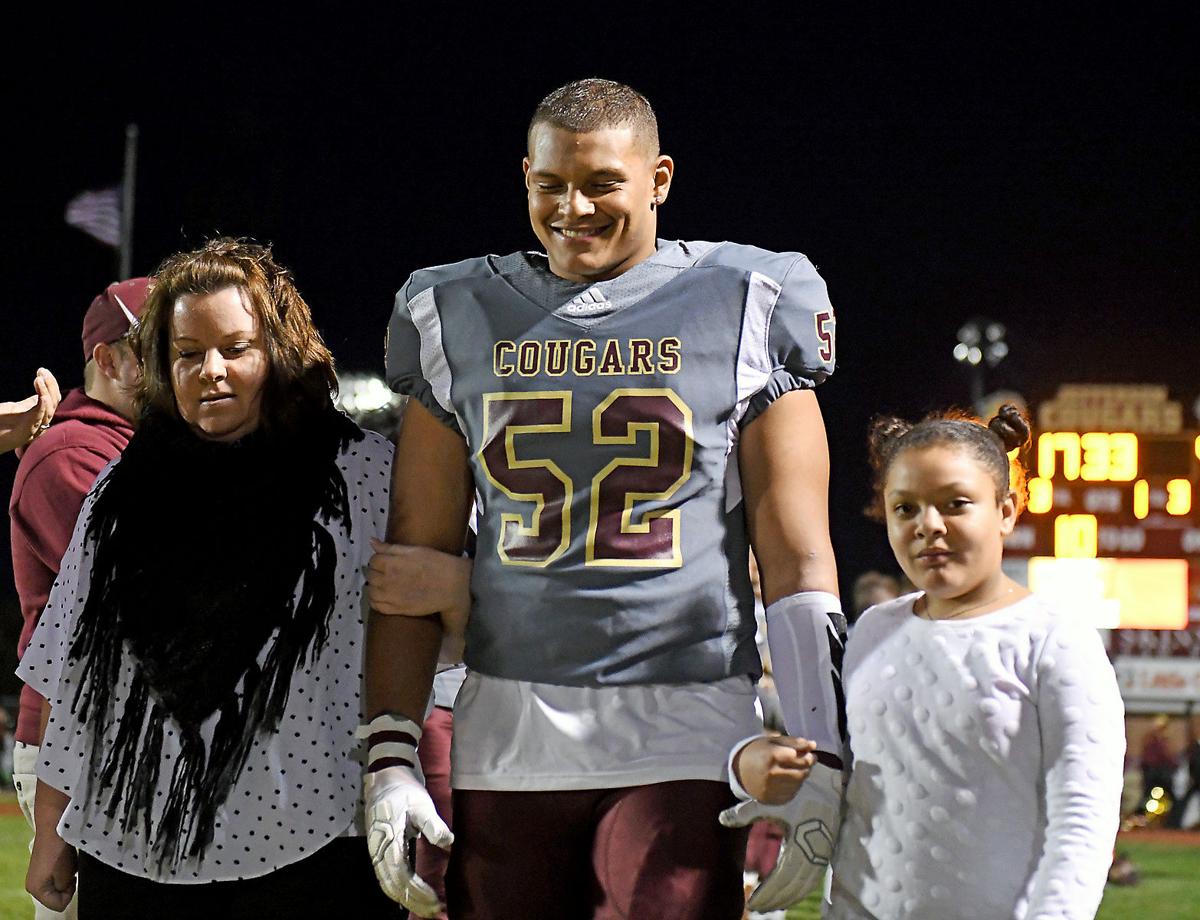 Jevon Lang fights to get around a Musselman tight end in 2016.

Jevon Lang smacks the helmet off a Musselman lineman.

Jevon Lang provides space for his teammates to jump on a loose ball.

Jevon Lang assists in a tackle in the cross county rivalry game.

It’s been 11 years in the making, but Lang has accomplished more than most players his age. The Jefferson High senior has been lighting up linemen and backfields alike since he was just seven years old, but he almost gave up on the sport just two years after starting.

“My dad convinced me to keep playing,” Lang said. “I wanted to quit due to all the headaches and pain the game originally brought, but from then on I just started to dominate all over the field and fell in love with the game. As time went on and I got older, the milestone of greatness compelled me to achieve more. That continues to fuel me.”

Lang’s father, a former West Virginia State player, was a major influence throughout his football journey. His dad knew he was born for the game, relaying to Jevon that he was “bred to play”.

Like many high school players, Lang is no stranger to playing on both sides of the ball – although he prefers defense.

“[I prefer] laying hits and abusing people opposed to taking hits,” Lang said. His accolades speak for themselves – Lang is formidable force. In turn, his drive to excel was noticed by his coaches which helped fuel his rise through the ranks.

“Jevon has always been a hard worker,” head coach Craig Hunter said. “His dedication to the weight room and team has always been top notch. His work ethic [made him] a great leader his first two years [before] he became more of a vocal leader the last two.

On the field he has a motor that will not quit – chasing people down all over the field. He’s a phenomenal kid and a phenomenal player. I cannot wait to see him on the field at the next level,” Hunter said.

His line coach, Bernie Boswell, had similar thoughts about Lang.

“I have been Jevon's position coach for all four years of his high school career, and was his defensive coordinator this past season. His work ethic and desire to be the best was apparent as soon as he came to Jefferson,” Boswell said. “[That] immediately propelled him into a starting role on both sides of the ball as a freshman. As a four year starter he quickly mastered the basics early on and defensively he was able to begin refining his craft at a higher level. His work ethic in the off-season was second-to-none, and in-season he was a film junkie and began to mentor the younger players.

There is no quit in him, and he never took a play off. The past two years he [improved in] his leadership role and was respected by players and the coaches for always leading by example and pushing everyone around him to be their best.”

Boswell took a moment to reflect on his star lineman. “If you sat and watched film with me you would have to listen to me saying, ‘You’ve gotta watch what he does on this play,’ over and over again,” he said. “His ability to make tackles behind the line of scrimmage on plays going away from him was amazing, but there are two [highlights] that stand out from this year, both against Martinsburg.

First was his one handed sack while still being blocked. The second one is an example of how he never quits and has a relentless motor. Martinsburg’s punt returner broke a return down the opposite side of field from Jevon and looked like he would score. Jevon chased the play from behind and made the tackle more than 30 yards downfield against a very fast young man.”

Boswell made it clear there weren’t just a few highlights, but that Lang had a laundry list of big plays.

Prior to the 2018 season, Lang attended multiple camps to get his name out in the scouting pool by showing off his talent. He attended Elon, Marshall University, West Virginia State, East Carolina University and two West Virginia University camps, as well as the Big Man and Rivals camps.

“Those camps, especially the Division I camps, let me notice where I was athletically across the board. I competed with top prospects across the nation and did very well. That’s what really got me ready for my season,” Lang said.

His raw energy and defensive knowledge has gotten the attention of more than 10 colleges and universities so far, including Wake Forest, Long Island, Saint Francis, Marist, Eastern Kentucky University, Marshall, Concord and Shepherd. Although Lang leans towards the thought of suiting up for the Rams, Saint Francis, Long Island or Eastern Kentucky, he’s keeping his options open.

The panhandle native realizes that the road to greatness doesn’t come by showboating, but through staying humble through success.

“An athlete should embody a humble and intelligent presence among their peers, as I’ve found out a lot of them really look up to me,” Lang said. “I personally believe daily growth in all aspects of life is necessary, so I focus on listening and acknowledging others, not just my teachers. I also socialize with everyone to make sure people don’t feel out of place.”

As his high school chapter closes, number 52 is more than ready to move onto the next level. The humble senior doesn’t talk without backing it up, though all he needs to do is point to his numbers.

“I’ve been putting up numbers for four years and started out on the best defense in the state, packed full of crazy talented players, and I was still slept on until my senior year,” Lang said.

Lang now prepares for his college career, a feat that not many high school students can claim. He will make his decision in the coming months, but wherever he goes believe that he’ll make a statement.

Jevon Lang led an incredible senior season under the maroon and gold, and can now tack on All-State honors to his laundry list of awards for t…