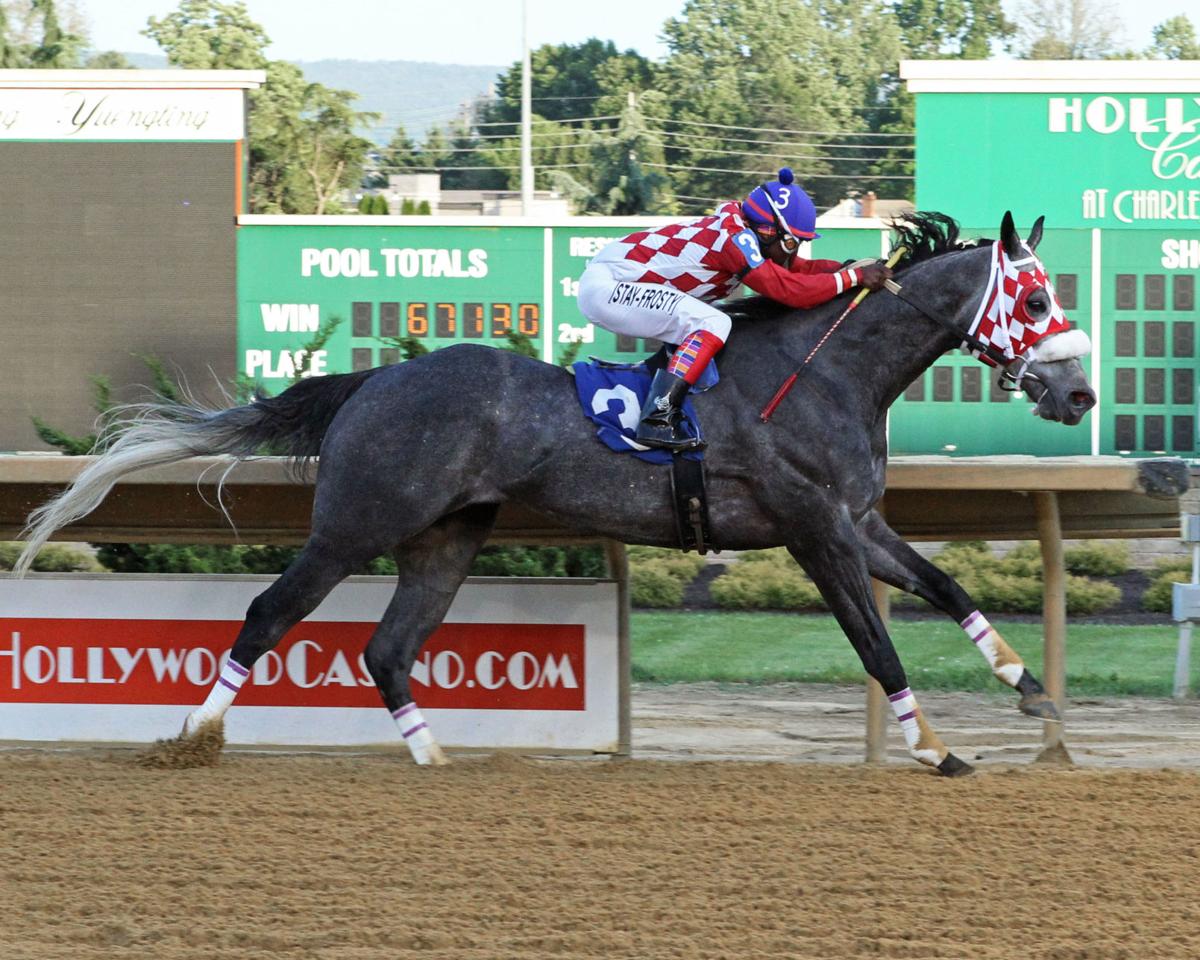 Dr. Feelgood (Darius Thorpe) captured the $50,000 It’s Only Money Stakes on Saturday night at Charles Town for trainer Crystal Pickett by getting the 4 1/2-furlongs in 52.05 as the solid favorite. 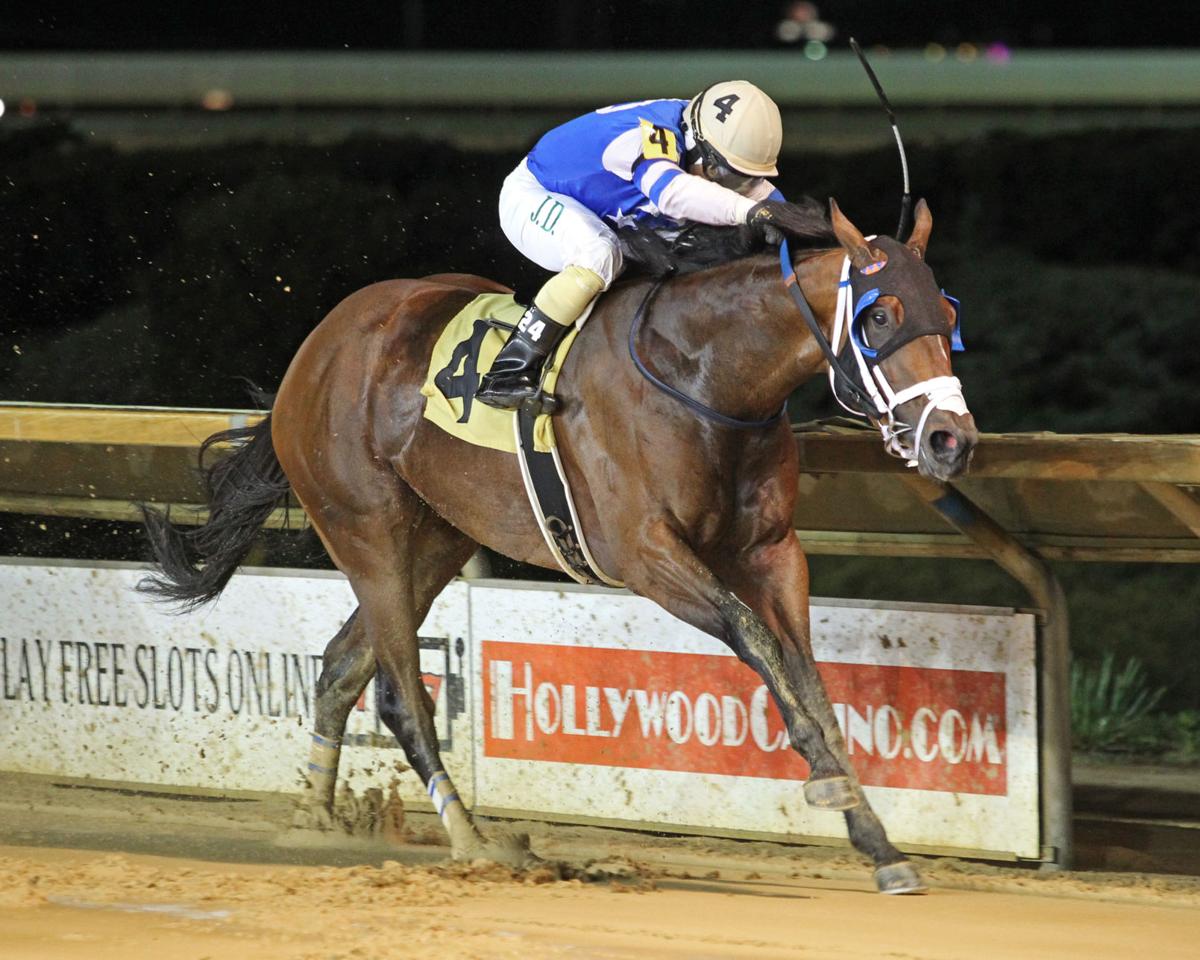 Dr. Feelgood (Darius Thorpe) captured the $50,000 It’s Only Money Stakes on Saturday night at Charles Town for trainer Crystal Pickett by getting the 4 1/2-furlongs in 52.05 as the solid favorite.

As was the case with the final two weekends of May, Charles Town offered a pair of stakes to kick off the first weekend of June with one each being designated for West Virginia-bred male and female runners alike.

Last Saturday night’s feature was the $50,000 It’s Only Money Stakes for West Virgnia-bred older males and it was carded as the second race on the program, rather than its usual spot as the penultimate race on the card. But the early post for the It’s Only Money, named in honor of the Tim Grams trainee who won the first edition of the $100,000 Charles Town Dash back on July 4, 1999, hardly impacted the results.

Much of the attention heading into the It’s Only Money Stakes centered around Dr. Feelgood (Darius Thorpe) who has emerged as the best one-turn sprinter on the grounds for a second straight year. A five-year-old Fiber Sonde gelding trained by Crystal Pickett for owner Jill Daniel, Dr. Feelgood was made the prohibitive 2-5 favorite in a race where Pickett’s good three-year-old, Hypothesis, was an overlooked 10-1 shot.

When the gates opened in the It’s Only Money Stakes, Dr. Feelgood and longshot Freedom Is Ringing both broke alertly and dueled for command down the backside and by the opener in 21.3 then battled through the far turn and to the eighth pole. In the final 100 yards, however, Dr. Feelgood edged clear from his pressure to a two-length score while stopping the timer in 52.05 for his second win in as many starts this year and his 10th victory from 12 career outings.

Several races later on the card, Amelia Bedelia lived up to her role as the 2-5 favorite in a two-turn allowance for state-bred fillies and mares when she prompted the pace early then drew clear in the lane to a three-length score. A four-year-old daughter of Fed Biz trained by Jeff Runco for owner David Raim, Amelia Bedelia notched her second win in four starts this year and now owns a 7-2-4 slate and over $150,000 banked from 14 career outings after getting the seven panels in 1:27.05.

One night earlier the Friday feature was the $50,000 Fancy Buckles Stakes for state-bred fillies and mares contested over a “sloppy” track. Twirling Owen (J.D. Acosta) continued her fondness for stakes over the local strip when she led throughout the defeat older rivals. A sophomore daughter of Twirling Candy trained by Anthony Farrior for owner-breeder James F. Miller, Twirling Owen recorded her second stakes win of the season and third stakes in four tries by getting the 4 1/2-furlongs in 52.83 as the solid favorite. It was her fifth win in nine starts overall, pushing her career earnings toward $140,000.

Three races earlier in a one-turn allowance for state-bred older males, Windsors For It forged a mild 5-1 upset when he prevailed. A four-year-old Windsor Castle gelding owned, bred and trained by James W. Casey, Windsors For It notched his first win in three starts this year and now sports a 4-2-2 slate and over $85,000 banked from 13 career tries after getting the 4 1/2-furlongs in 52.96 over the off going.

Two races earlier in a two-turn allowance for fillies and mares, It’smyintention posted a mild 3-1 upset when she scored in one of the overnight features. A sophomore daughter of American trained by Jody Caison for owner Roger Sterling, It’smyintention notched her second win in five starts this year and eight tries overall after getting the seven panels in 1:28.42 over the sloppy surface.

Then one night earlier in the Thursday feature, a one-turn allowance dash that served as the penultimate race on the card, Lady Rebel posted a 15-1 shocker. A five-year-old Canadian-bred daughter of Not Bourbon trained by Cliff Tuomisto, Lady Rebel recorded her second win in five starts this year and now owns seven wins and just over $80,000 banked from 26 career outings after getting the 4 1/2-furlongs in 53.16.