You are the owner of this article.
Edit Article Add New Article
News
Opinion
Sports
Obituaries
Legals
Subscribe
1 of 4 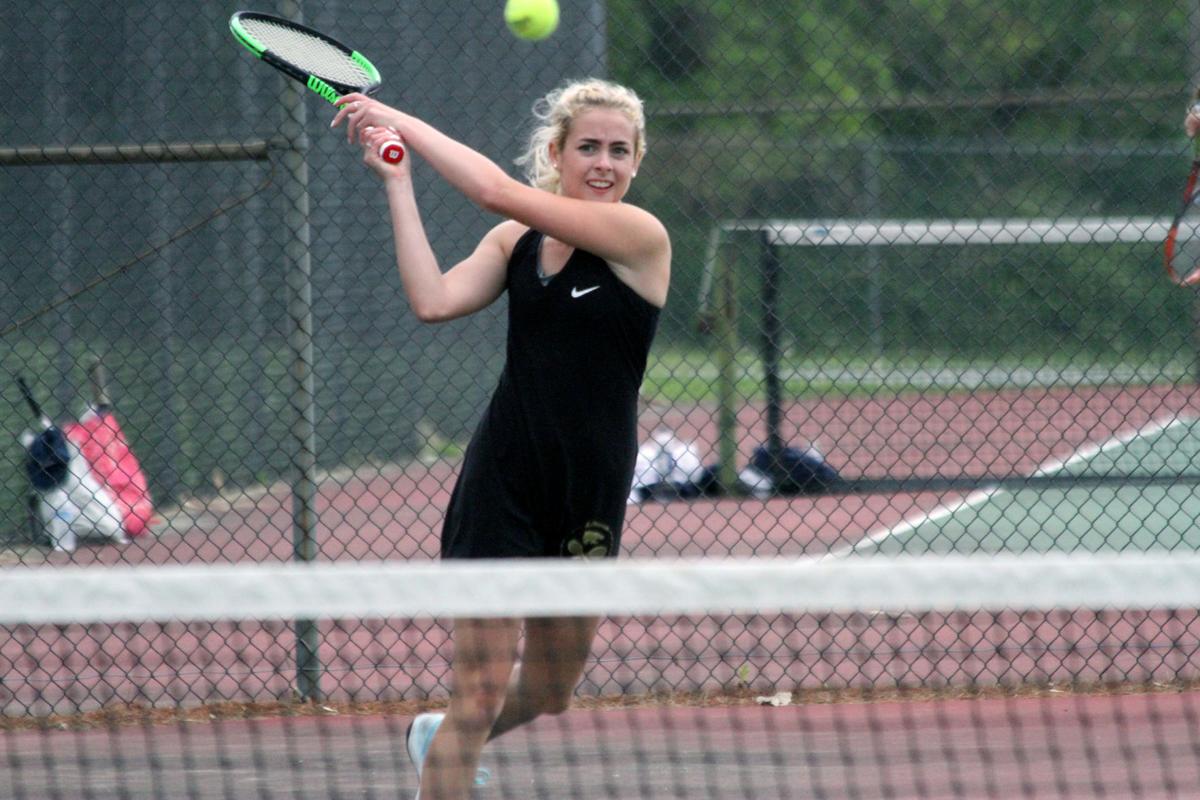 Kailin Gregg returns to Musselman in the No. 2 doubles semifinals. 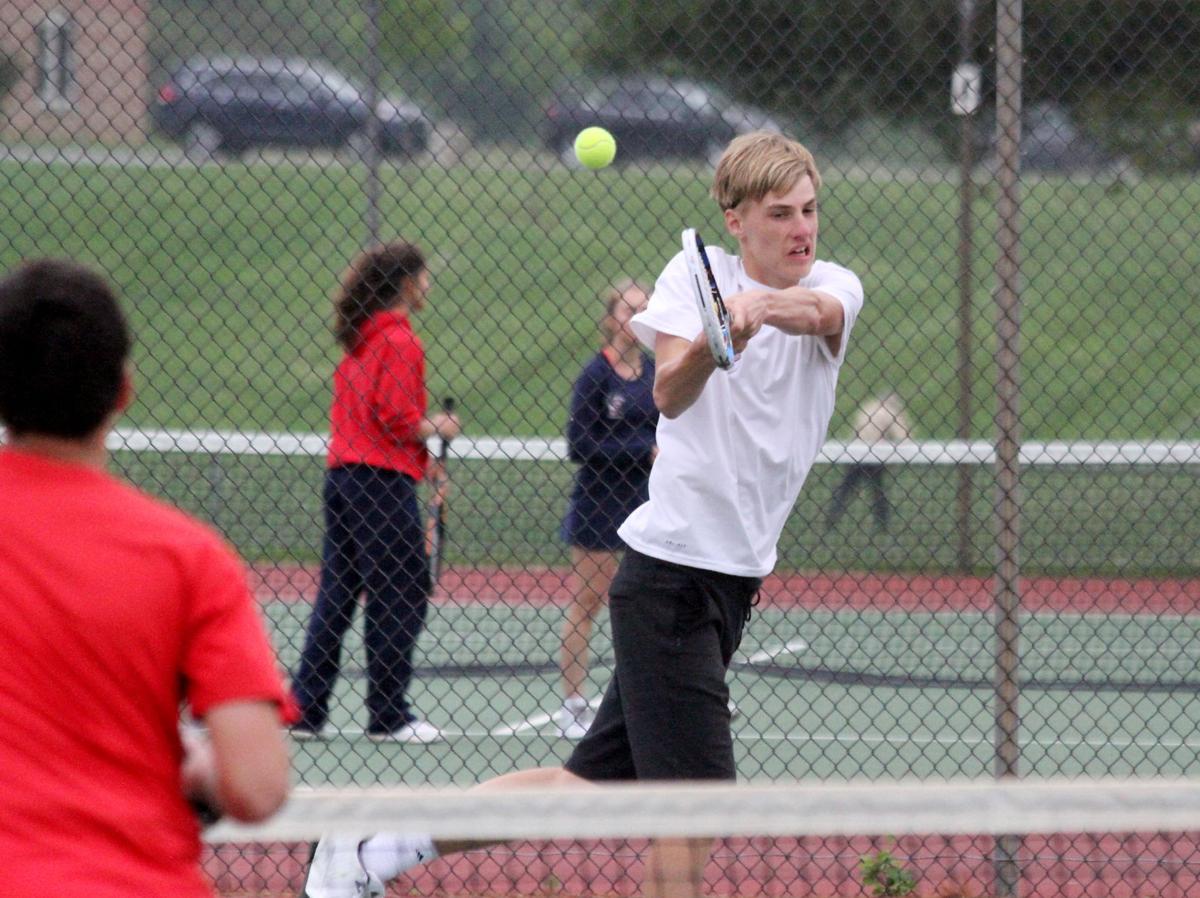 Cole Gore returns to Washington in the No.. 1 doubles semifinals. 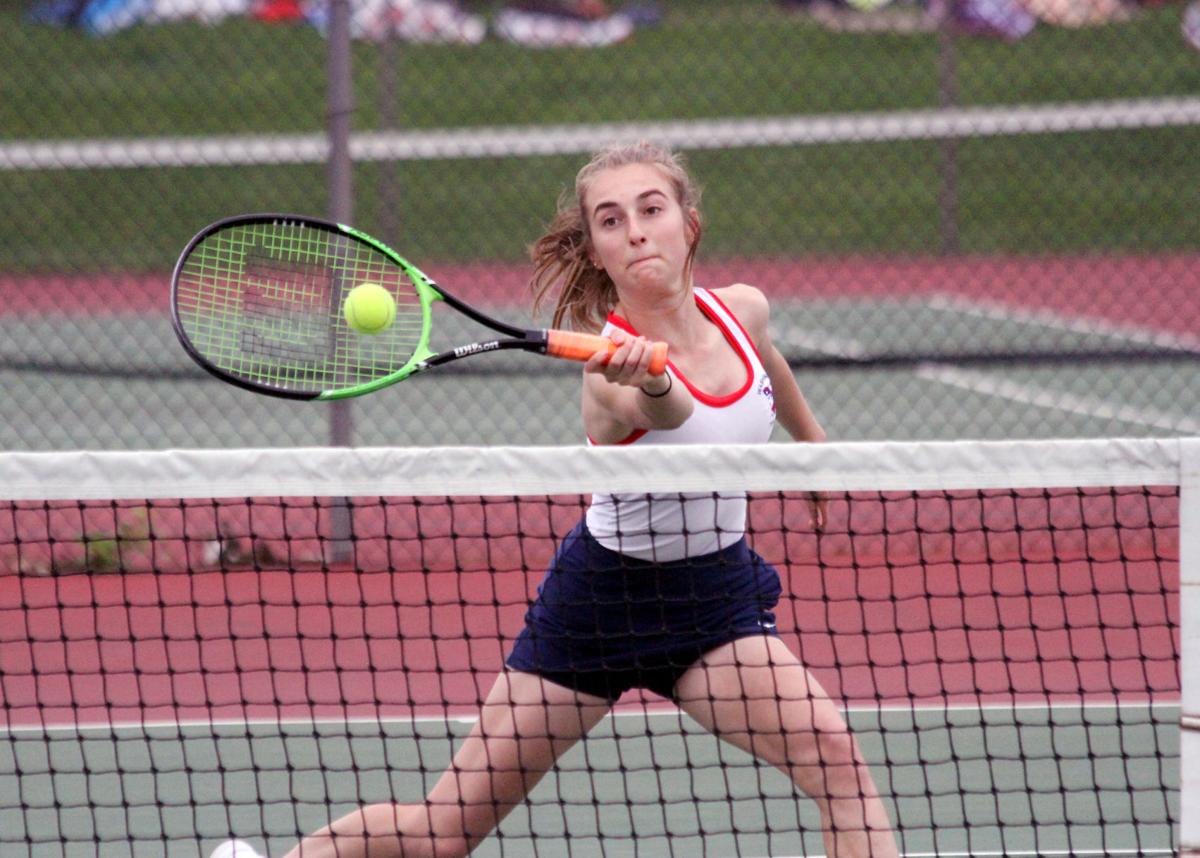 Holly Goben gets a quick return at the net off of a Spring Mills’ shot. 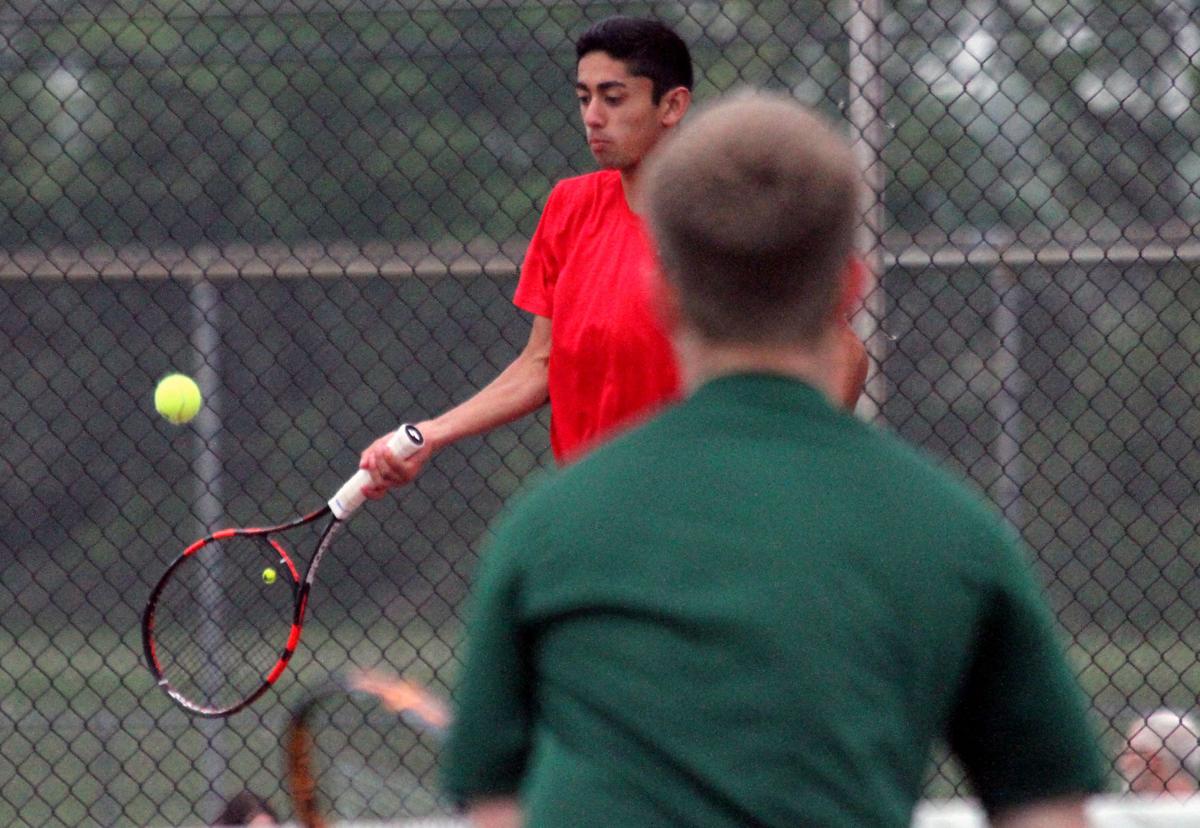 Jacob Thaldorf returns to Musselman in the No. 2 doubles semifinals.

Michael Barr returns to Martinsburg’s Gray SIlver in the No. 2 singles semifinals. Barr moved on to claim the title over Jefferson’s Cole Gore.

Kailin Gregg returns to Musselman in the No. 2 doubles semifinals.

Cole Gore returns to Washington in the No.. 1 doubles semifinals.

Holly Goben gets a quick return at the net off of a Spring Mills’ shot.

Jacob Thaldorf returns to Musselman in the No. 2 doubles semifinals.

SHENANDOAH JUNCTION – Before the Region II tennis tournament was halfway over, the Cougars and Patriots knew they would be sending players to the states.

Jefferson would retain the Class AAA, Region II title with a close 15 point win over their conference opponents. Washington (13), Musselman (11), Spring Mills (7) and Hedgesville (1) filed in the lower spots, while Martinsburg and Hampshire tied for last with no points. Hampshire was a no-show for the regional tournament.

In singles action, Amaia Yoldi picked up wins over Spring Mills’ Rose Britner (8-1) and Washington’s Madison Vickers (8-0) to land in the title game and qualify for states. Molly Hull automatically qualified for states with a bye, moving on to defeat Peyton Ruest to face Yoldi.

Hull prevailed in the title game, taking the win at 8-5.

“Right now I’m just focused on the fact that I qualified – and I’m happy about that,” Yoldi said. “I’m going to go out there and play my best [in my remaining games].”

Yoldi, an international student from Spain, has been playing tennis since a young age allowing her to step into Maddy Chen’s old spot. Starting at 5-years old, Yoldi learned a slightly different style of tennis until she moved to Jefferson for the year.

“It’s different because we don’t play teams,” Yoldi said. “In Spain, I would just play all of the players.”

A big jump from Spain to West Virginia, Yoldi is gracious to have landed where she did.

“I love that everyone is so welcoming [here]. I’ve loved how I felt that I was a part of both my swim and tennis teams,” she said.

In the No. 2 spot, Anna Ours advanced from bye in the first round to down Musselman’s Rachael Ratliff 8-2, clinching a state bid.

On the opposite side of the bracket, Agnese McCallister picked up a win over Martinsburg’s Elizabeth Silver 8-5 before moving onto K.C. McManus for another solid win (8-2) to qualify.

McAllister defeated Ours 8-3 to pick up the Region II title – a redeeming moment from losing the title in last year’s final game.

Ours is a returning regional title holder, but moved up from No. 3 this year. Her 8-2 win over Nina Tan in 2018 secured the title for Jefferson.

In No. 3 singles, Washington and Jefferson claimed the only state tickets with big wins each. Jefferson’s Kailin Gregg downed Kiran Cole 8-5, and Washington’s Holly Goben moved over Ava Ratliff 8-4. Goben defeated her county rival 8-5 to pick up the first place win.

Gregg is also a returning regional title holder, downing Ratliff in the final game of the 2018 No. 4 singles match.

Jenna Weber was the final Cougar to qualify for states, claiming the No. 4 singles title with a 8-1 win over Kiersten Haynes.

In doubles action, Vickers-McAllister blanked Britner-McManus 8-0 in the No. 1 title game. The Spring Mills duo made it to the finals after a devastating 8-6 upset over Yoldi-Ours in the quarterfinal round.

For the boys, Washington picked up the overall top place with 14 points. Hedgesville (11) and Jefferson (10) filed behind them, while Musselman and Martinsburg tied for fourth with six points. Spring Mills came in seventh with two points, and Hampshire came in last.

A slew of boys from Washington and Jefferson will be heading to states as well – namely young stars Mason Palmer and Cole Gore, and seniors Michael Barr and Jacob Thaldorf.

Martinsburg’s John Partington overcame Jefferson junior Palmer 9-7 to win the No. 1 singles title. Palmer, who was the No. 4 seed last year, is a reigning regional champion. In his first year in the top spot, Palmer led a commanding season for the Cougars.

“I’ve qualified for states all three years, but there was a little more pressure this year being the No. 1 seed,” Palmer said. “It’s made me a lot better, playing the tougher competition. But it’s been a lot of fun.”

Barr also picked up a regional title, defeating Jefferson freshman Gore 8-3 in No. 2 action. Barr moved through the bracket with ease, first with a default win followed by a 8-3 knockout of Gray Silver IV. Gore, who advanced to the semifinals from bye, had a harder time clinching the state bid with a 9-7 win over Hedgesville’s Brent Moore.

In No. 3 action, Thaldorf qualified for states with a 8-4 win over James Dailey IV in the semifinals. Thaldorf easily overcame fellow-qualifier Matt Spickler 8-5 in the title game.

Finally, Washington’s Jackson Sigler took on Hedgesville’s Joey Arndt in No. 4 play, but would fall 8-2 – just shy of qualifying.

In doubles, Palmer-Gore defeated Raven Bond/Nick Snyder 8-0 to keep the title at Jefferson. Thaldorf-Sigler picked up a solid 8-3 win over Spickler-Ardnt in the No. 2 spot, while Musselman’s Braynd Anderson-Jake McMillian defeated Washington’s Killian Butera-Nathen Perry in a tight 9-7 No. 3 qualifying game.