You are the owner of this article.
Edit Article Add New Article
News
Opinion
Sports
Obituaries
Legals
Subscribe
1 of 7 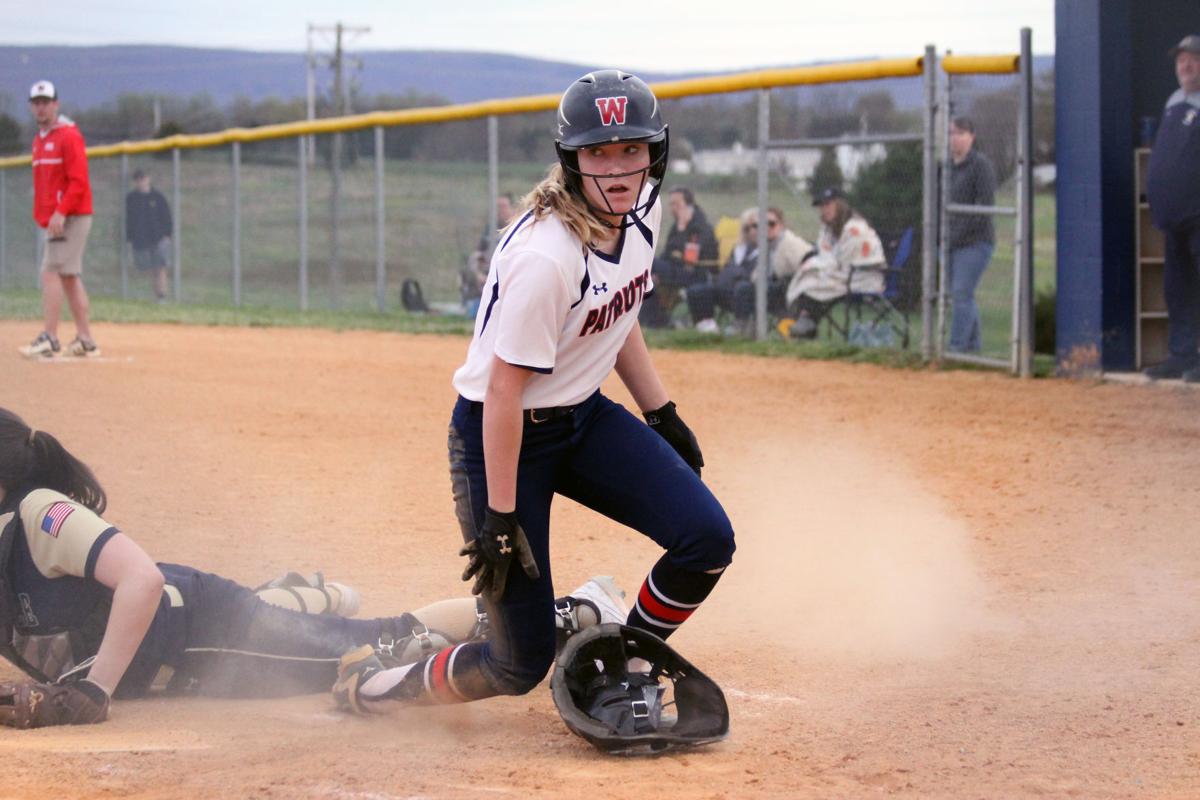 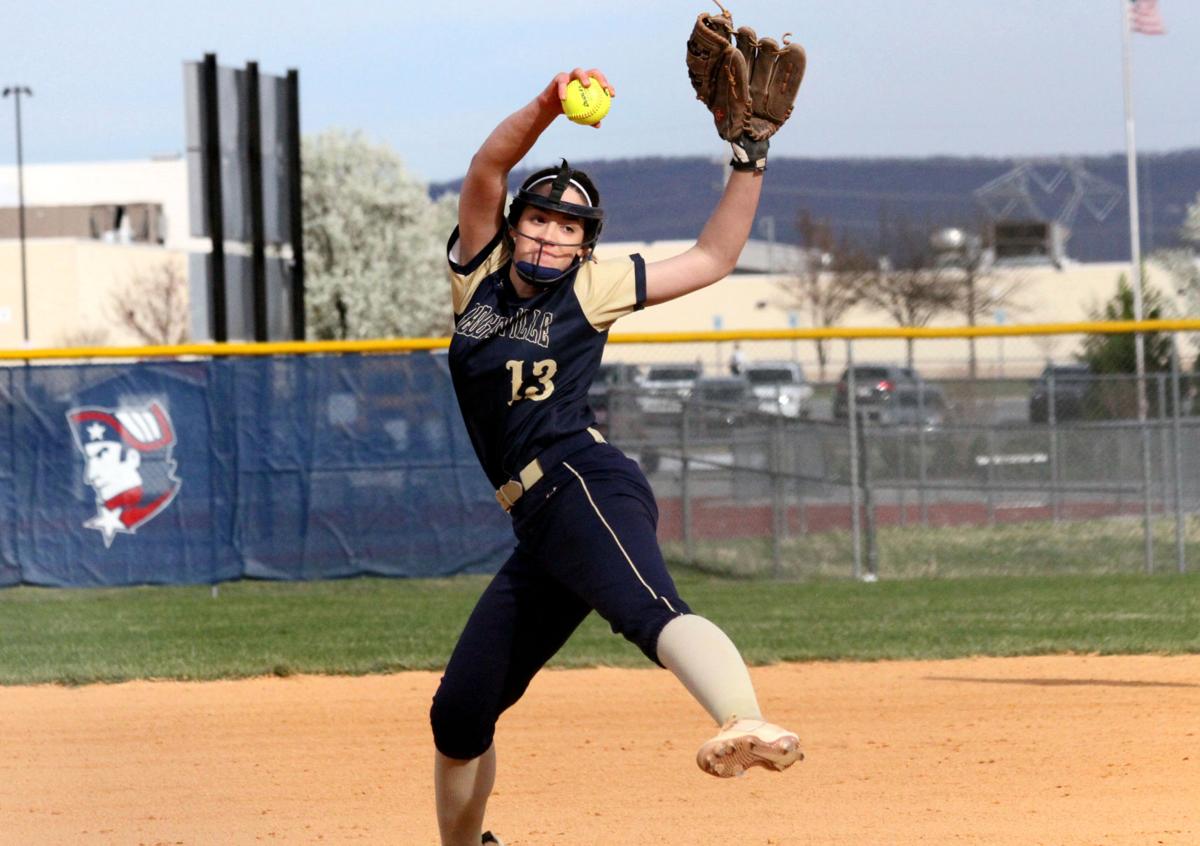 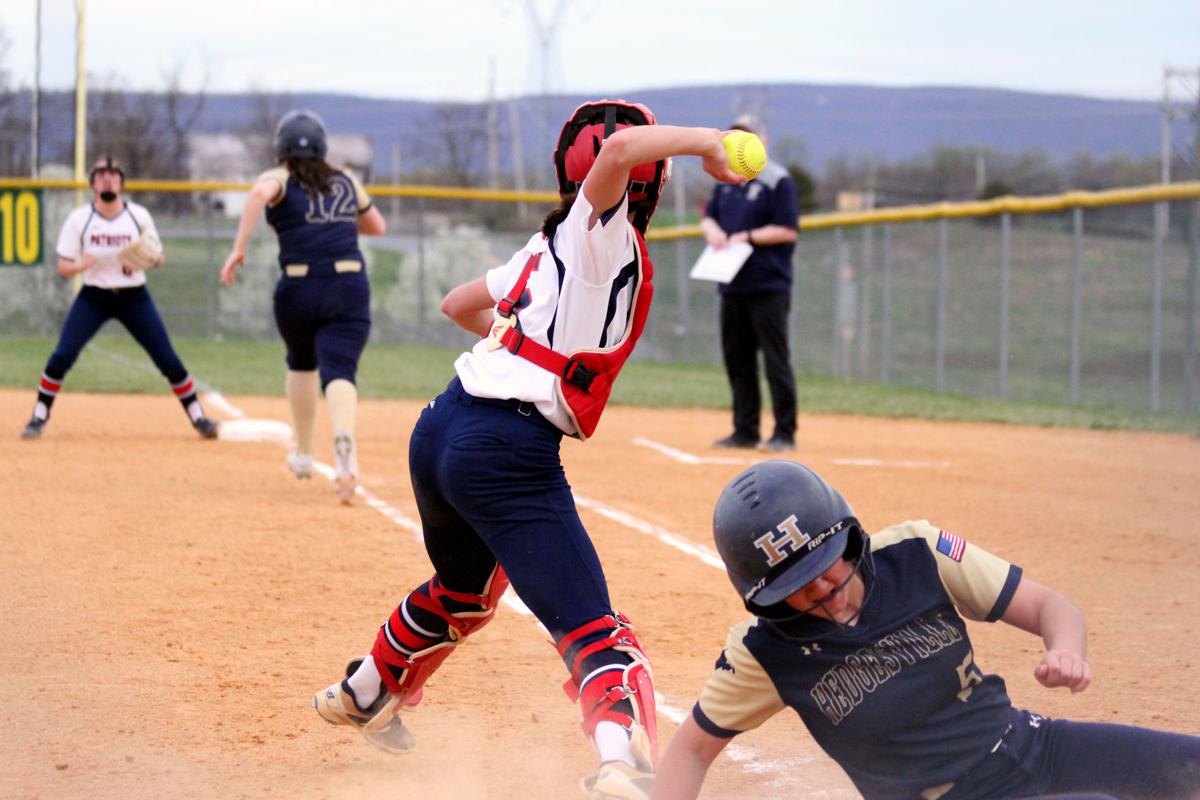 April 10, 2019; Mackenzie Myers tags the runner out at home, but fails to turn the double play. 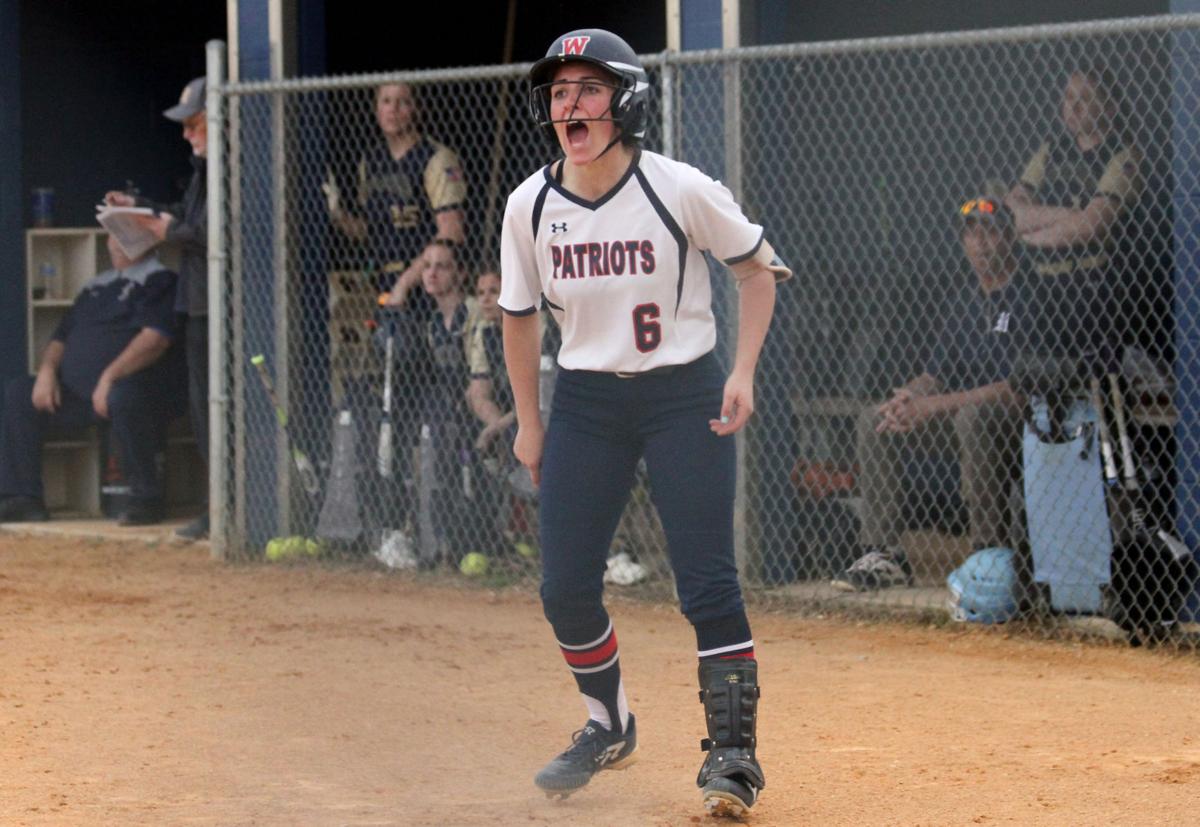 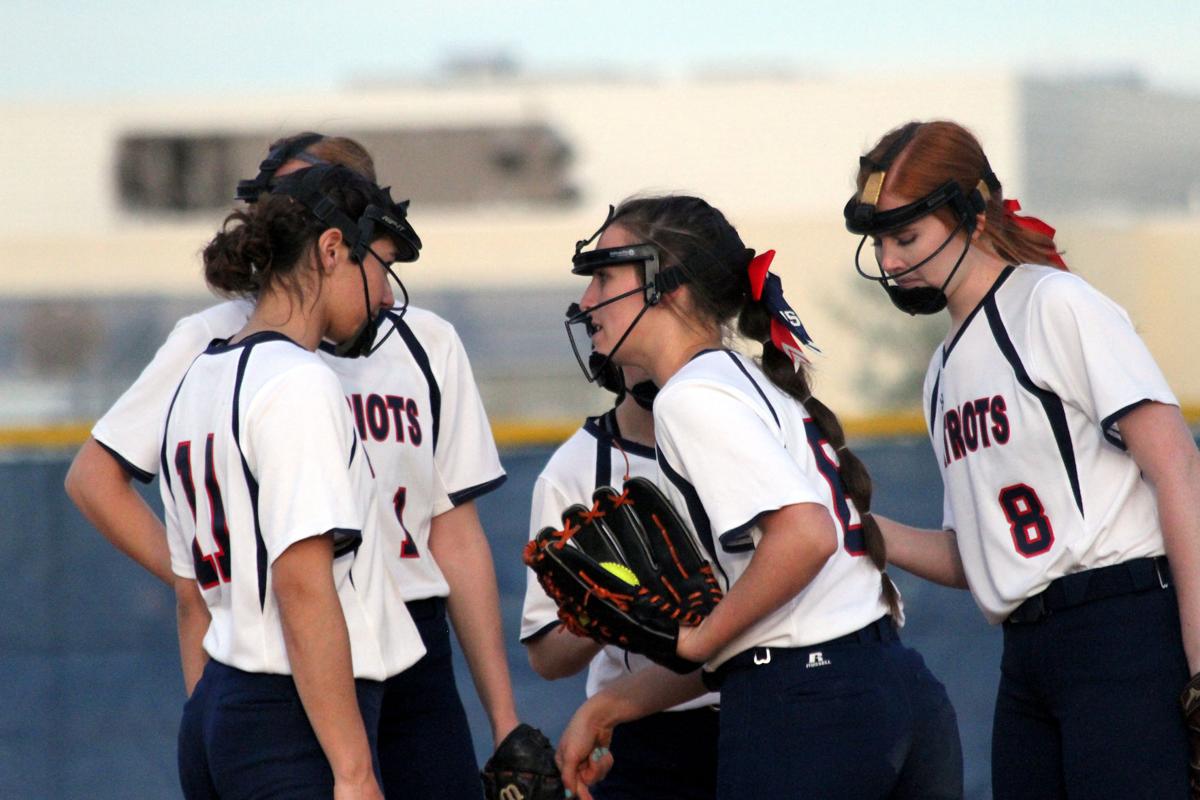 April 10, 2019; Taylor Cenate talks to her infield before the top of the eighth. The Patriots and Eagles were tied 7-7 going into the extra inning. 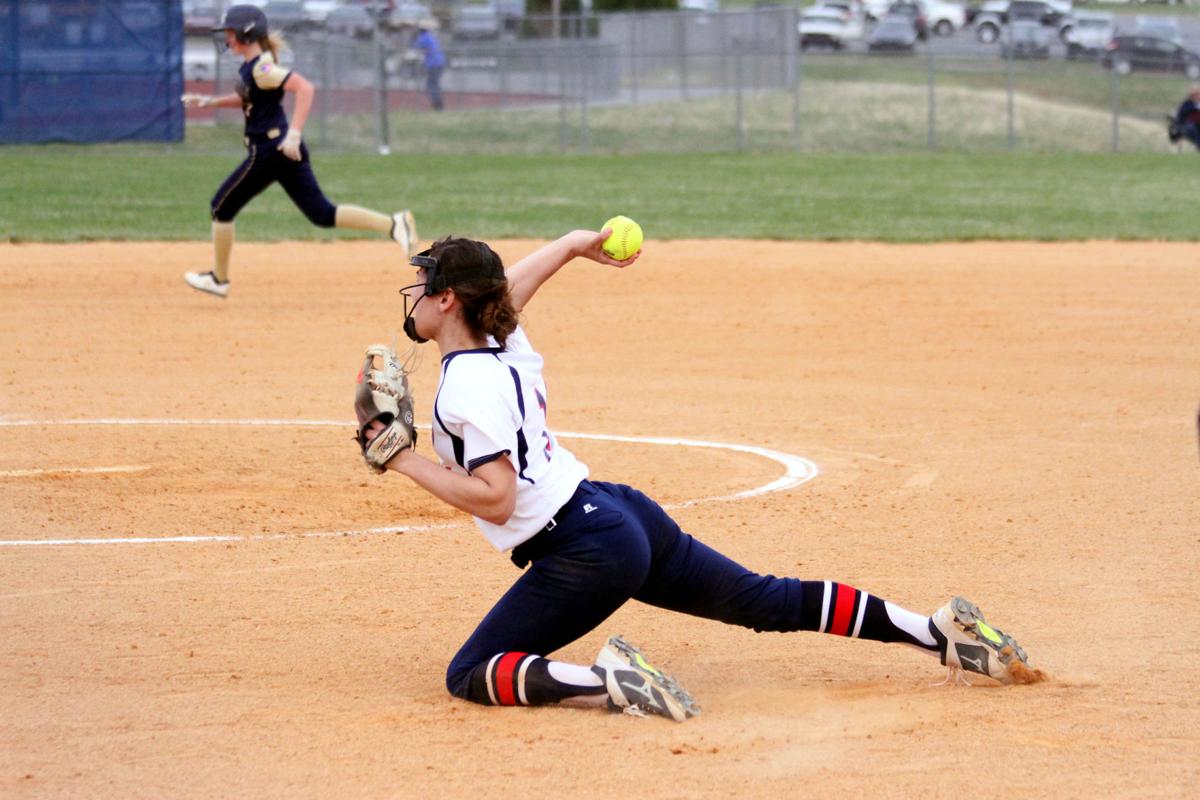 April 10, 2019; Kylie Condon grabs a short bunt and turns to throw back to third base. 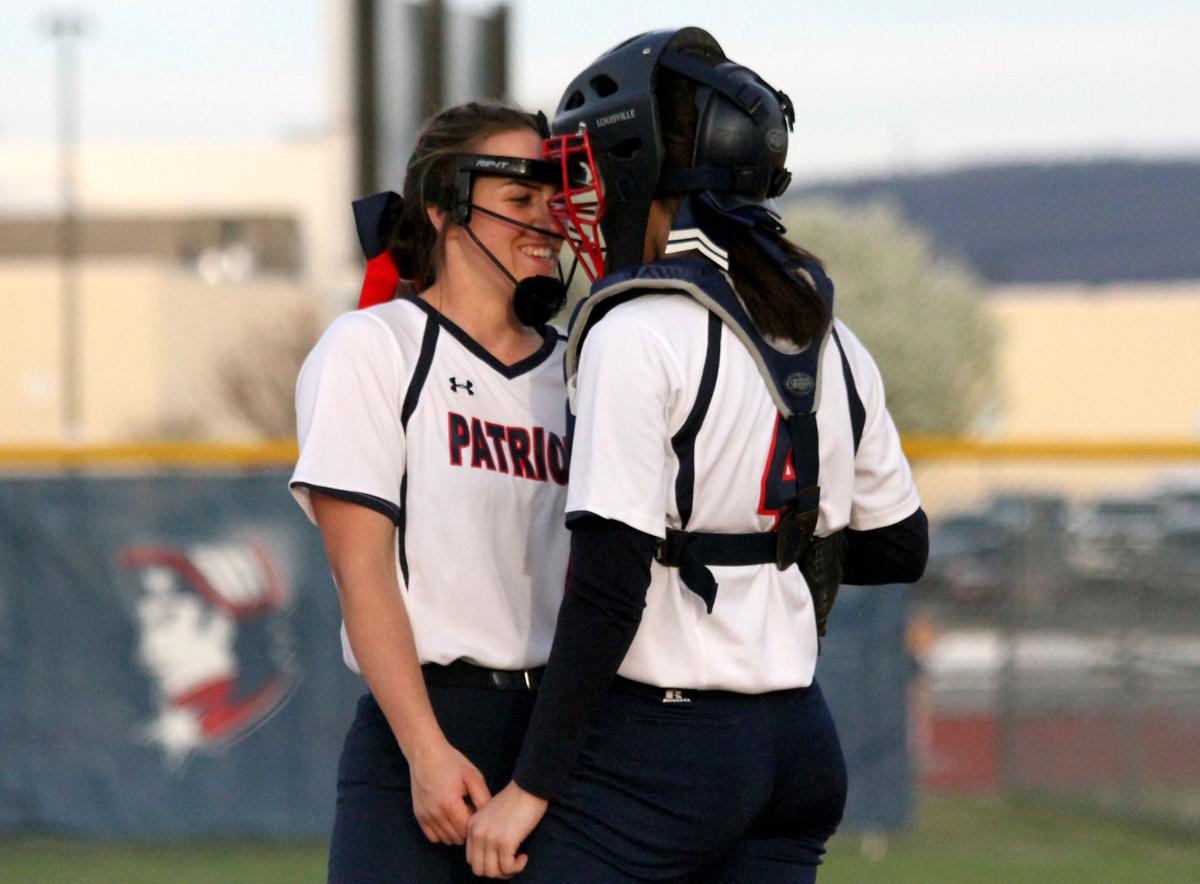 April 10, 2019; Taylor and Madi Cenate talk to each other after Taylor took over pitching duties in the top of the seventh.

April 10, 2019; Mackenzie Myers tags the runner out at home, but fails to turn the double play.

April 10, 2019; Taylor Cenate talks to her infield before the top of the eighth. The Patriots and Eagles were tied 7-7 going into the extra inning.

April 10, 2019; Kylie Condon grabs a short bunt and turns to throw back to third base.

April 10, 2019; Taylor and Madi Cenate talk to each other after Taylor took over pitching duties in the top of the seventh.

CHARLES TOWN – It’s no surprise that heading into the postseason, Washington softball has run the table. Taking the no prisoner warpath this season, they have major pull to see the state tournament once again.

Entering the playoffs with a 22-1 record – falling to just John Marshall in their third meeting of the year – the dominate performance through the regular season gives them a break before facing the winner of the first Section 2 game.

No. 3 Hampshire (1-23) will travel to Jefferson High on Wednesday for Game 1. The No. 2 Cougars (11-12) hold the momentum going into the first game of the double-elimination week with a 1-0 record over the Trojans. In their only game of the season, Jefferson took down Hampshire 12-0 and, due to their second game being canceled and Hampshire’s less-than-moderate record, bought their right to host the first game of the postseason run.

In a two year span, the Trojans have won just two games out of a 40-game total. And if numbers show anything, the final elimination game – between what should be Hampshire and Jefferson – will give us a subsequent Jefferson County showdown in the sectional finals with Taylor Cenate (8-1), Jordyn Brown (7-0) and Hannah Ruffner (7-0) leading the charge for the Patriots.

It’s going to be tough for anyone to get a hit or run off of the Patriot trio – Brown maintains one of the best ERAs and average against combos in school history. The nearly perfect .382 ERA (just two have come in with her on the hill) leads the troupe, while her .176 BAA is the second best. Cenate holds a still impressive 1.570 ERA after going the longest without a single earned run against her, and she boasts a .221 BAA. Ruffner cleans up with a 1.647 ERA and the leading .156 BAA through her eight starts.

The two that can do it, however, are Rachel Cunningham and Ashtin Hoover. Cunningham leads the team with a .554 batting average, while Hoover sports a .434 average.

Whoever Jefferson puts on the mound – whether it be Chloe Munslow or Hoover – will have to deal with a monster nine-woman slugging corps led by Kylie Condon with a .545 batting average, team high and record breaking 39 RBI and five home runs. No batter in the order drops below the .300 mark. The batting order is mainly responsible for the shortened games and 255 runs.

In 2018, Washington advanced to the Region II tournament with two close wins over the Cougars. 2017 was a different story, as the Patriots easily cruised to regionals with shutout wins over their rival.

If history repeats itself, the Patriots will see themselves going up against Hedgesville for a ticket to Parkersburg. In 2018, Washington advanced to states with a full series, sweeping the final two games,  and in 2017 easily cruised to the state quarterfinals in two games over the Eagles. Washington is currently 3-0 over the Eagles on the season, their closest win coming off of a walk-off 8-7 victory in their second meeting.

This year the Eagles are led by Miranda Payne on the hill, a danger to batters as she leads the conference with 12 wins. She holds a 2.08 ERA heading into Wednesday.

In their first game of the season, Payne replaced Emma Turner on the mound, unable to stop the Patriots' onslaught. In her second outing against the Patriots, Payne got the start and pitched for three innings, giving up three earned ones and one walk while striking out three. In the final game of the year, the Patriots steamrolled Hedgesville 10-0 to win the Moorefield tourney, holding Turner and Payne to an inning each on the mound. The two combined for eight earned runs and two walks against them, and logged no strikeouts.

Threats to the Patriot pitching trio are Isabella Forte and Emma Turner. Forte was key in Eagles' close loss at Washington High, and leads the conference with 44 RBI. Turner, on the other hand, leads the Eagles at the plate with a .474 batting average.