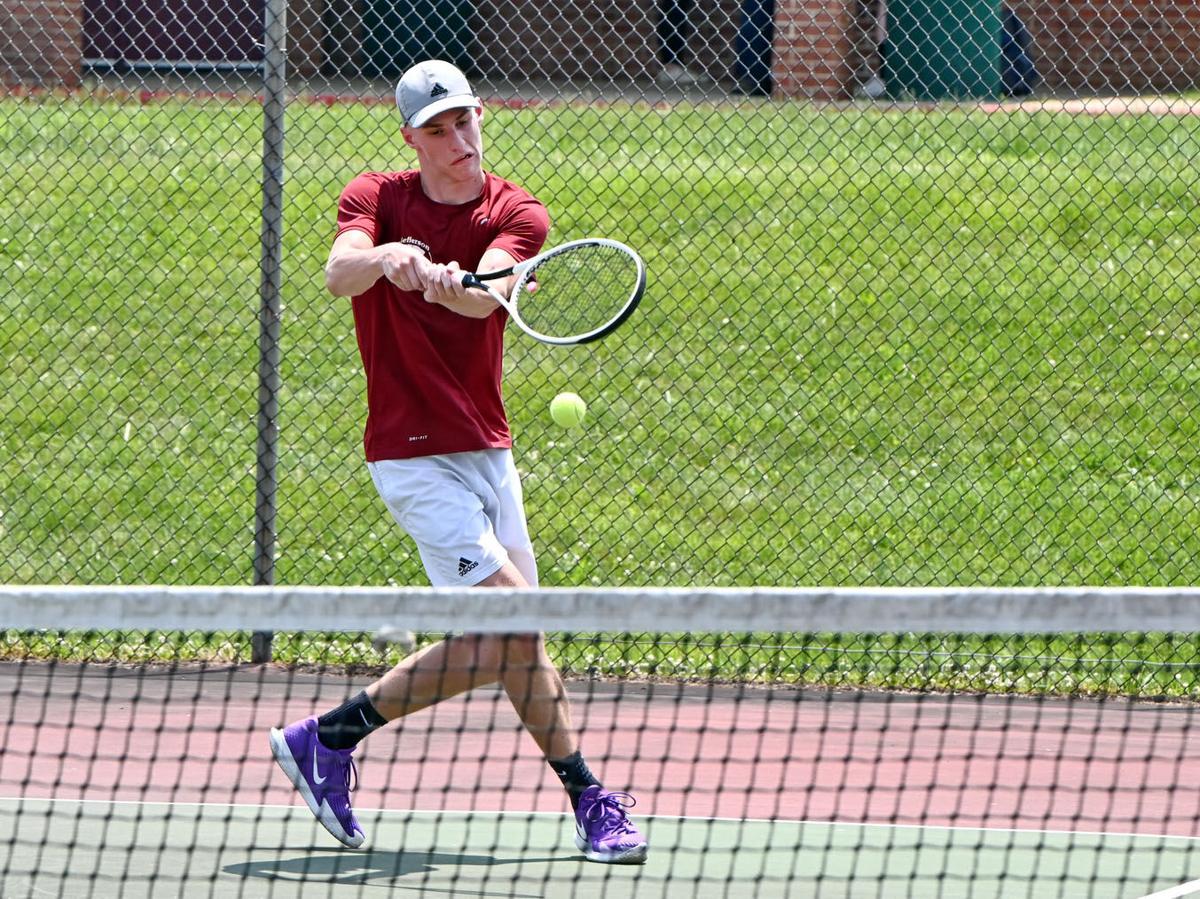 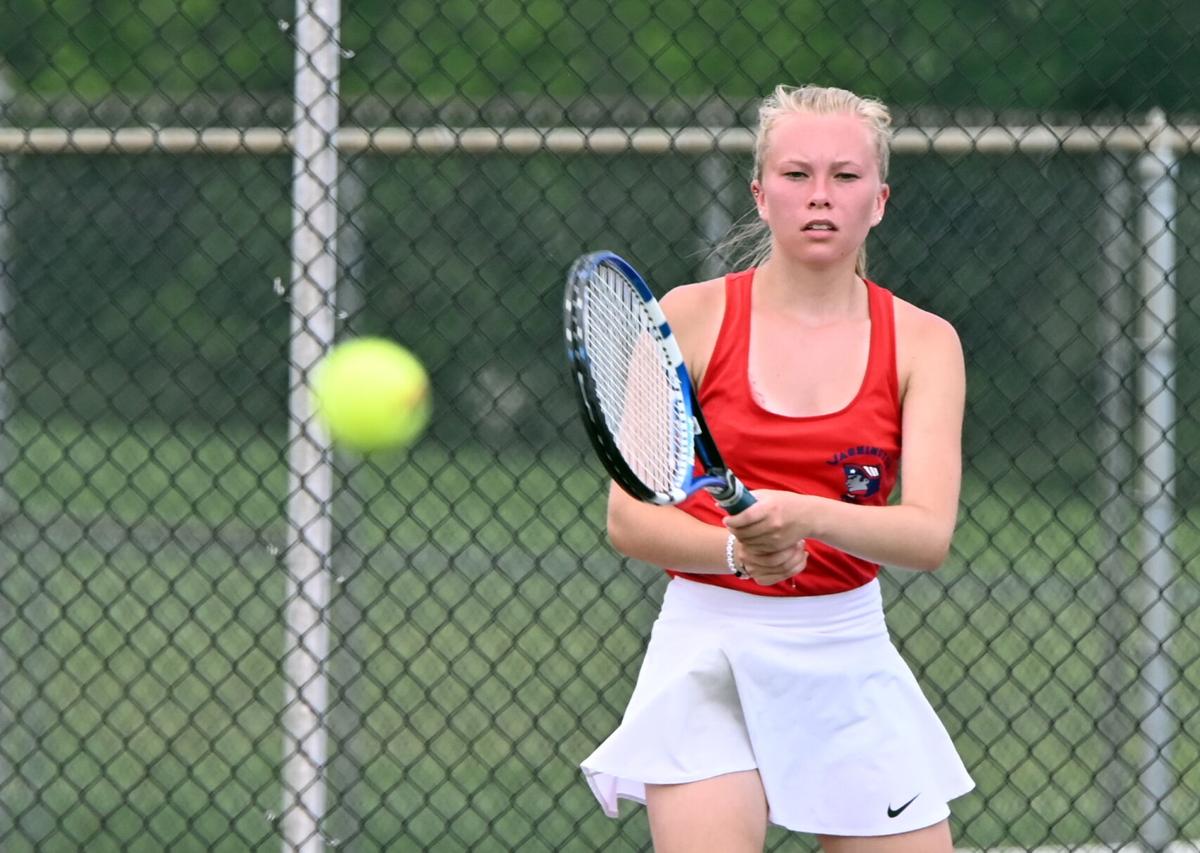 The Patriots swept the boys and girls team crowns, holding off their rival Cougars in both cases.

Washington’s boys earned an 18-13 win over Jefferson. The Patriots squeezed past the Cougars, 14-11 for the girls’ title.

Spring Mills got third in both team standings with 11 points.

Wednesday’s No. 1 boys’ singles finals featured a match-up of county tennis powers. Jefferson’s Cole Gore defeated Washington’s Jack Schlotter for that regional title, 8-5, but it wasn’t easy. Schlotter hung with Gore most of the match before Gore’s strong play at the end gave him the win.

“It was a tough match,” Gore said. “Conditioning turned out to be a big help.”

There was intense heat on Wednesday, with temperatures approaching 90 degrees. Tournament director, and Jefferson boys coach Glenn Edwards, kept advising players to drink plenty of fluids and to make sure they had enough bottles of water with them on the courts. Once they entered the courts, they could not leave, unless they needed a bathroom break, until their match had been completed.

Schlotter said it got pretty hot on the court, but he focussed on Gore, the eventual winner.

“Cole’s a pretty good player,” Schlotter said. “But I think I got some pretty good shots in against him.”

Gore and Gottlieb combined for the No. 1 boys’ doubles title, defeating Schottler and Perry in the finals, 8-6. At No. 2 boys’ doubles, Praseth and Snyder defeated Ben Jacob and Henry Evans, of Jefferson, in the title match, 8-2.

Vickers prevailed in the end, 8-4, but it took two days to complete it.

Most of regional play made it through last Wednesday before heavy rains forced the suspension of play. Most of the girls’ singles finals matches had already started when the courts at Jefferson were cleared, due to the impending storm.

That turned out to be a big help for Vickers, who had been struggling with cramps on Wednesday.

“When we first pulled the players off the court, Madi spent about an hour with the trainer to work out the cramps,” first-year Washington girls coach Eric Cooper said. “The break definitely gave her some time to get some relief.”

When play resumed on Thursday, Vickers was back in form, taking less than an hour to complete her win over Cole. After not playing last year, due to the COVID-19 pandemic, Vickers, a junior, said it’s good to get back out on the court and she’s looking forward to states.

“I was disappointed we couldn’t play last year, we had a really good team,” she said. “But we’ll be ready for the state tournament next week.”

Cooper is also impressed by the way Washington has rebounded from the one-year layoff.

“With all of the changes, this team has adjusted to the situation very well,” he said. “They’ve shown a lot of determination and have handled everything with grace. We’re headed in the right direction. They’re in the right mindset for states.”

Once the season resumed this year, Vickers focused on a few aspects of her game, which needed attention. With no tennis last year, she had some catching up to do.

“I worked on my power shots, being more consistent,” Vickers said.

Jefferson freshman Ava Wilson, who defeated Spring Mills for the No. 3 singles title, 8-5, hadn’t played tennis in a while, but she relied on her previous experience, playing in some U.S. Tennis Association-sanctioned events, to regain her form. Rader, the No. 3 seed in the bracket, didn’t go down easy, making Wilson worked for every point.

“I’ve been working on my backhand during the off-season,” Wilson said. “It definitely needed it. If I’m nervous, I calm myself down by listening to calming music before a match.”

Wilson said she’ll probably get back into USTA-sanctioned events once the high school season is over. In the meantime, she’s looking forward to playing in the state tournament this week.

Lochner and Smith combined to defeat Vickers and McGinnis at No. 1 girls’ doubles, 8-3, for the title. Washington’s Mallory Jacobs and Anna Walter won at No. 2 girls’ doubles, defeating Jefferson’s Wilson and Olivia Jenkins, 8-4.