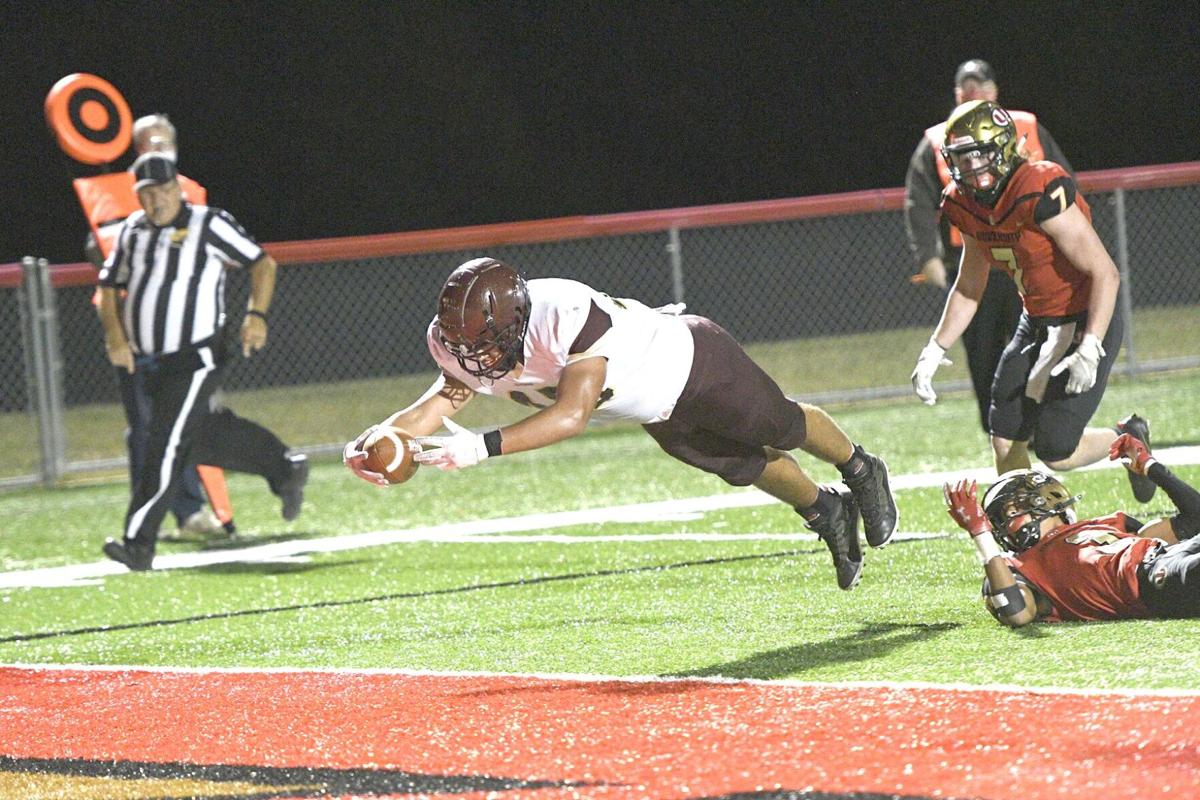 Nathan Muhle catches a touchdown pass from quarterback Sammy Roberts for the Cougars’ second score of the game.

Washington’s Thomas Wogan runs through a hole big enough to park a car during Friday’s victory over Frankfort.

Nathan Muhle catches a touchdown pass from quarterback Sammy Roberts for the Cougars’ second score of the game.

Washington’s Thomas Wogan runs through a hole big enough to park a car during Friday’s victory over Frankfort.

CHARLES TOWN – There was no way Frankie Amore was going to let visiting Frankfort win on the last play of last Friday’s football game at Washington.

The Patriots had rallied from a 13-0 deficit, and were clinging to a 20-19 lead in the game’s waning minutes, when the Falcons put together one last drive.

On third down inside the Washington 15, Frankfort kicker Corey Brieloff lined up for what appeared to be a routine chip shot, a 23-yard field goal attempt with 4.6 seconds to go in the game.

Amore, part of the Patriots’ special teams’ kick coverage, knew what he had to do. When the ball was snapped, Amore charged across the line of scrimmage, headed straight for Brieloff.

“It was like running in a 100 meter sprint,” Amore said of his quick start to the ball after the snap. “Tommy Wogan and myself were on our way, going after it, to try and stop that kick.”

Amore was able to tip Brieloff’s kick just enough to take some speed and trajectory off the ball so it could be knocked off course even further by a sea of Patriots’ defenders. The ball was downed out of harm’s way as time expired, setting off a massive celebration on the field on the Washington sideline and in the Patriots’ bleachers.

Washington had just knocked off previously-unbeaten Frankfort, 20-19, to even its record at 3-3.

“This is the biggest win I’ve ever been associated with as a coach, either as a head coach or an assistant coach,” Patriots’ head coach Glen Simpson said. “What a finish.”

About three hours away, in Morgantown, Jefferson pulled a shocker, taking a 14-0 lead against homestanding, and top-ranked, Class AAA University High School, and then held on at the end for a 14-13 win to pull to 2-3 on the year.

In last Friday’s game at Washington, Amore, Washington’s quarterback, wasn’t sure if his tip was good enough to deny Brieloff’s potential game-winning field goal. The cheering he heard from his teammates reassured him his effort was successful.

“I heard a lot of yelling and screaming,” Amore said. “Then, I looked back at the scoreboard. When the score didn’t change, I knew then we had it won.”

Last Friday’s finish at Washington was a far cry from how it started.

Frankfort staked itself to a 13-0, halftime, lead.

Cole Hiett scored the first of his three touchdowns for Frankfort with seven minutes to go in the first half, scoring on a 5-yard run. Brieloff’s kick gave the Falcons a 7-0 lead.

With 1:46 to go in the half, Hiett scored from 20 yards out, pushing Frankfort’s lead to 13-0 at the half. Hiett broke loose for a 66-yard TD run five minutes into the second half.

“He’s such an explosive runner,” Simpson said of Hiett.

Simpson said he wasn’t happy on the sideline in the first half, watching Frankfort take a 13-point lead. Neither was Washington tight end Dylan Painter.

“We missed some opportunities in the first half,” he said.

The Patriots began climbing back into the game four minutes into the second half.

Wogan scored on a 2-yard run, pulling Washington within seven, 13-6.

The Patriots took the lead with 3:46 to go in the game. This time, it was Wogan’s turn to throw a touchdown pass as Washington’s use of the single-wing formation makes two passers, Amore and Wogan, available.

“Misdirection,” Amore said of Wogan’s go-ahead touchdown pass to Painter. “That was the key on that play.

Amore said Frankfort keyed on him, thinking he might have the ball for the pass. The Falcons fell for the deception, leaving Wogan open, with the ball, to hit Painter on a back-side pass pattern.

“I ran past the linebacker, got behind him in the end-zone to receive the pass,” Painter said.  “It worked. We were able to shut them down on that play.”

Simpson said he felt like the game was slipping away from Washington at halftime, but he liked the way the Patriots regrouped for the second half.

“We just kept after it, got it turned around.” He said.

Amore completed five of 11 passes for 126 yards and a touchdown. Fleming had four catches for 114 yards and a score.

After missing out on numerous scoring opportunities in a 28-19 home loss to Frankfort, Jefferson showed a lot of improvement, making two first-quarter touchdowns stand up to a University comeback last Friday in Morgantown, a team which was playing just its second game of the season, since COVID-19 restrictions in Monongalia County sidelined the Hawks’ athletics programs in September.

The Cougars scored with seven minutes to go in the first quarter, then struck again in the final minute of the quarter. Christian Blowe scored on a 9-yard run.

Nathan Muhle caught a touchdown pass from quarterback Sammy Roberts for the Cougars’ second score of the game. From there, Jefferson and University got into a defensive struggle the rest of the way.

Late in the first half, Roberts was injured, but returned in the second half.