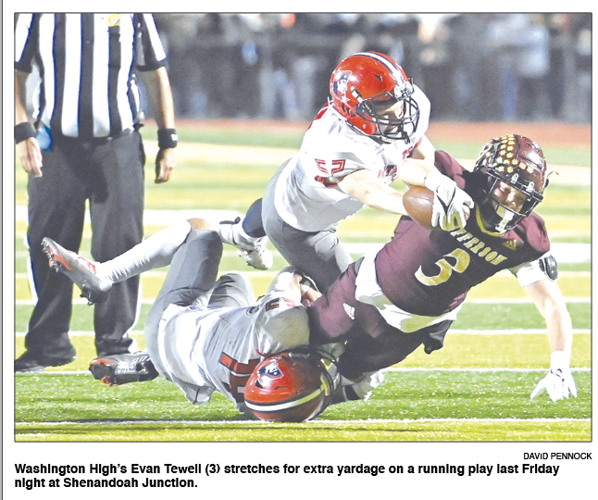 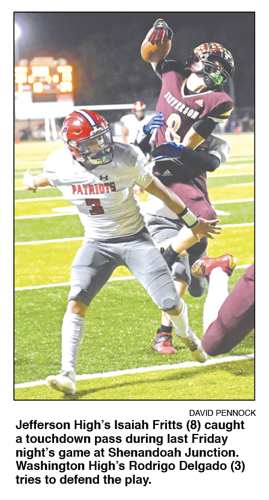 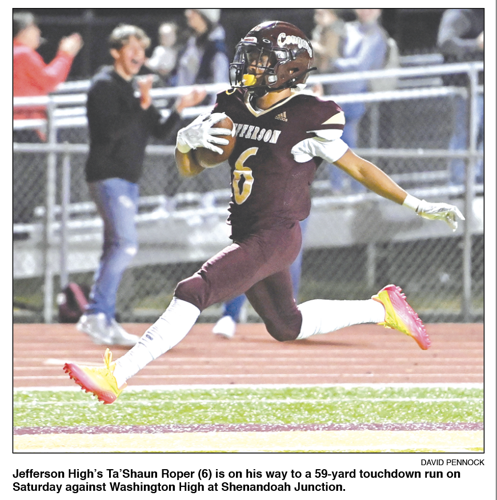 Evan Tewell just had to be patient last Friday.

The Jefferson High School senior running back was 57 yards away from becoming the school’s career-leader in rushing yards, heading into the regular-season finale against cross-county-rival Washington High last Friday night at Shenandoah Junction.

It could’ve happened early in the game. Instead, it was a slower process as Jefferson was using a balanced attack on its way to a 41-17 win over the Patriots. But on his first carry in the fourth quarter, needing just one more yard to set the record, Tewell broke a 12-yard run, on a toss-back play from quarterback Dylan Harich, setting off a huge celebration, both on the sideline and in the bleachers.

Tewell has amassed over 2,500 career rushing yardage for the Cougars. Jefferson coach Craig Hunter didn’t have an updated figure last Friday, but he did confirm Tewell has taken his place in the school’s football record books.

Was Tewell a little anxious to get it over with?

Yes, but he kept everything under control until his big moment early in the fourth quarter. He needed 10 yards on his final carry of the third quarter, but that carry was only good for nine yards.

When it was announced Tewell had tied the school career-rushing record, fans began chanting, “Give him the ball. Give him the ball.” Hunter soon obliged, and had Harich call Tewell’s number in the huddle.

“Yeah, it was late in the game,” Tewell said of his record-setting run. “But I knew we were going to get it figured out. I just made sure I was in position so I could receive the pitch backward from Dylan.”

Tewell would carry the football just one more time after his 12-yard, record-setting run last Friday. His final carry of the game was a 10-yard touchdown run. It was Jefferson’s final score of the game.

Tewell still has a chance to better his career rushing record this season. The Cougars will be making their second straight trip to the WVSSAC Class AAA playoffs, most likely going on the road this Friday or Saturday in a first-round playoff game.

FoWashington High (2-8) wasn’t going to make it easy on Tewell, or, for that matter, Jefferson’s offense in general. The Patriots’ defense had Cougar receivers Spencer Powell and Isaiah Fritts contained with some man-to-man coverage.

Washington didn’t give up any long pass plays, although Jefferson quarter- back Dylan Harich did get off a pair of touchdown passes. One was a six-yarder to Powell in the second quarter. The other touchdown throw Harich tossed was a 14-yarder to Fritts in the fourth quarter.

“They really came after us in this game,” Tewell said of Washington’s defense. “I don’t think we were that strong up front as we needed to be.”

Jefferson led the entire game last Friday, but the Patriots’ tough defense prevented the Cougars from turning the game into a blowout. Washington had been on the short end of numerous blowout losses this season, but not on this night.

Jefferson took a 7-0 lead in the first quarter on Tewell’s first touchdown run, which was good for five yards. The Cougars made it a 14-0 game when Harich scored on a 10-yard keeper play later in the quarter. Jhonathan Pineros hit on both of his extra-point tries in the first quarter.

Washington’s defense held Jefferson to a single score in the second quarter. Harich hit Powell with his six-yard touchdown pass for Jefferson’s points that quarter.

“They were playing a lot of man press, with help over top most of the time, mostly in the middle,” Powell said of Washington’s defensive setup. “They were also trying to be aggressive at the line, with the linebackers. The only way to handle that coverage is to outdo the man in front of you.”

The Patriots’ Rodrigo Delgado scored on a 25-yard run, then scored a 2-point conversion run. Kojo Osafo-Mensah kicked a 36-yard field goal, which pulled Washington High within 10 at the half, 21-11.

“I knew that if we were going to have a chance in this game, we had to keep the ball, maintain possession, and we had to put points on the board on our possessions,” Washington coach Glen Simpson said.

“We had a lot of people beat up in this game,” Fritts said. “Both of our starting linebackers were out. We were definitely running thin.”

Fritts said that wasn’t an excuse, but those absences did have some effect on the team’s overall play last Friday. “We probably weren’t as aggressive as we should have been coming out,” he said.

Tay’Shaun Roper got things going for Jefferson early in the third quarter, racing 59 yards for a touchdown. Harich also had a two-point conversion. Pineros kicked three extra points for the Cougars in last Friday’s game.

Washington’s final score of the game was on a 1-yard plunge from Delgado in the fourth quarter.

“It was just a matter of what we thought we might see,” Hunter said of Washington’s game plan. “We figured they would probably throw everything but the kitchen sink at us. We knew they were going to slow the game down, try to control time of possession.”

“We saw some blitzes from them in the third quarter,” Hunter said. “That kind of slowed us down a little bit, but we figured it out. It was just a matter of us making some end-game adjustments to it. That took care of it.”

Delgado rushed for 110 yards on 23 carries and two touchdowns for Washington High, which had been dealing with injuries for the early part of the season.

“We played Jefferson tough,” Simpson said. “They’ve got speed, they’re a really talented football team. In the second half, we had an opportunity to get back in the game, but we had some penalties, made some mistakes, and that took us out of some manageable down and distances.

“All credit to coach Hunter and his team. They did a heck of a job.”