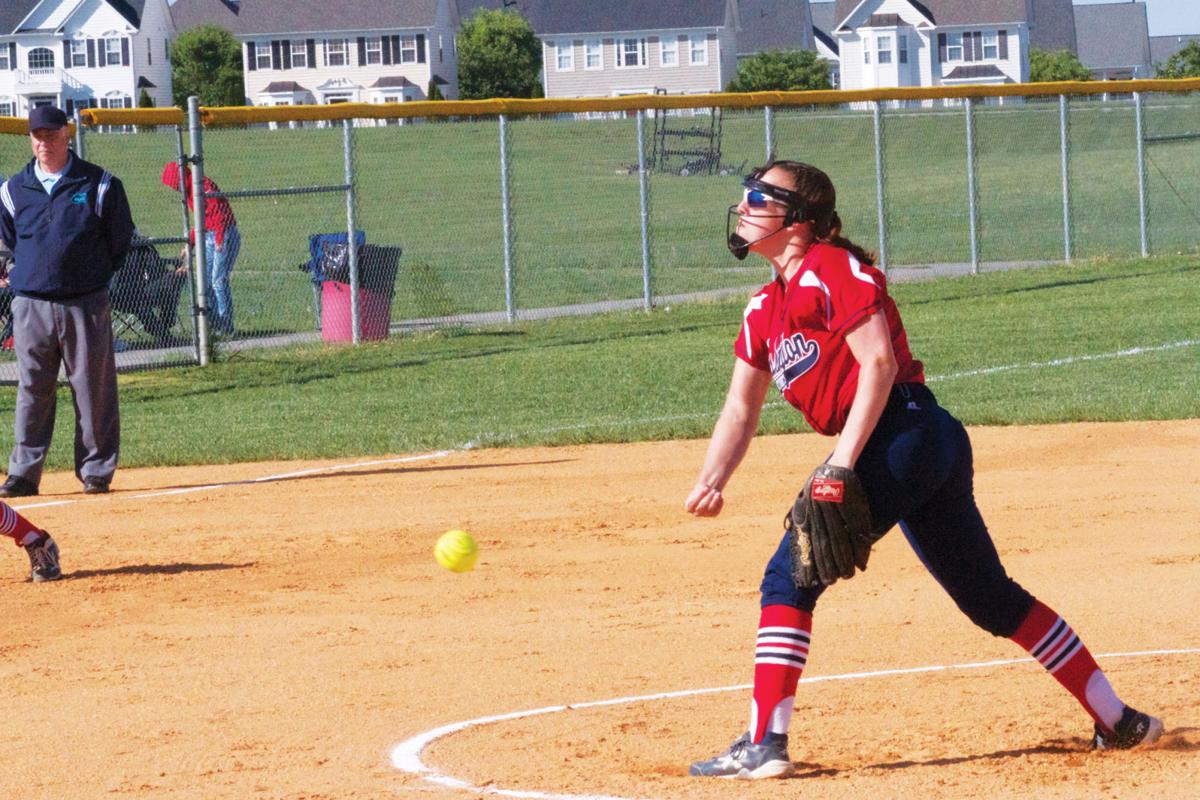 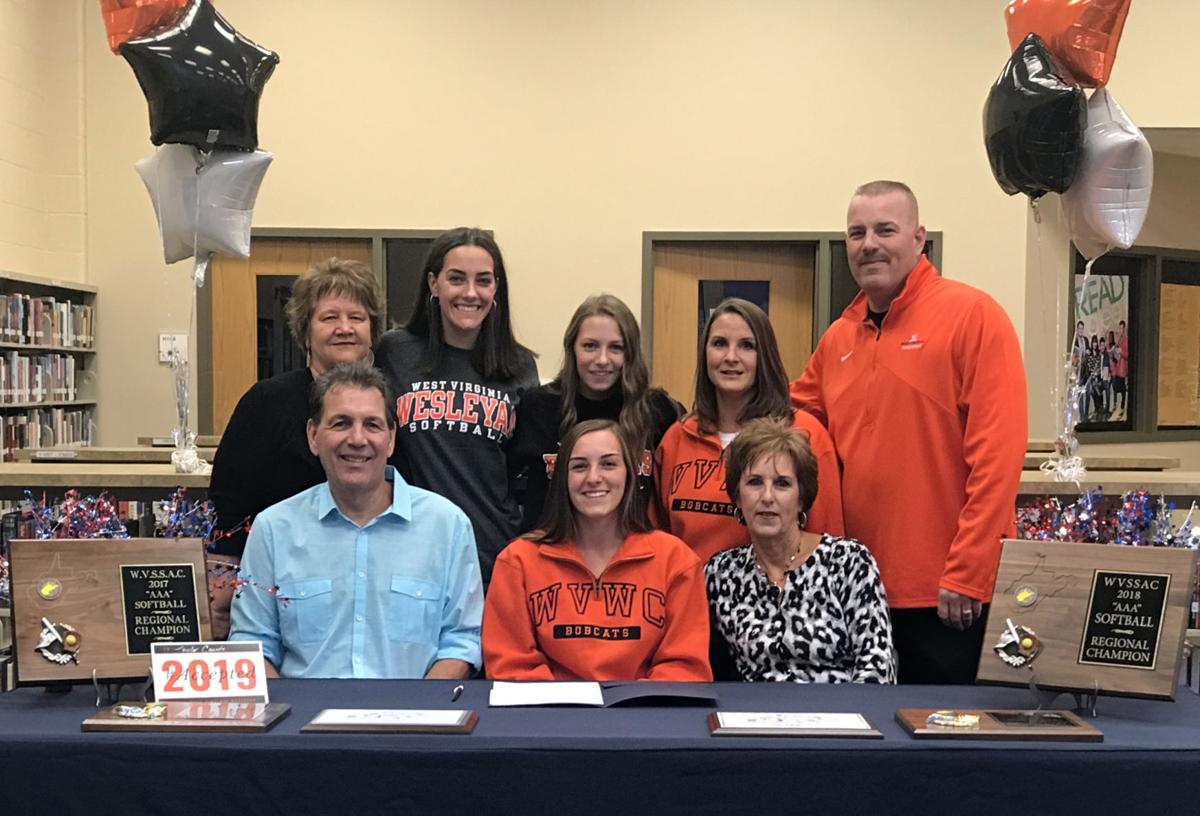 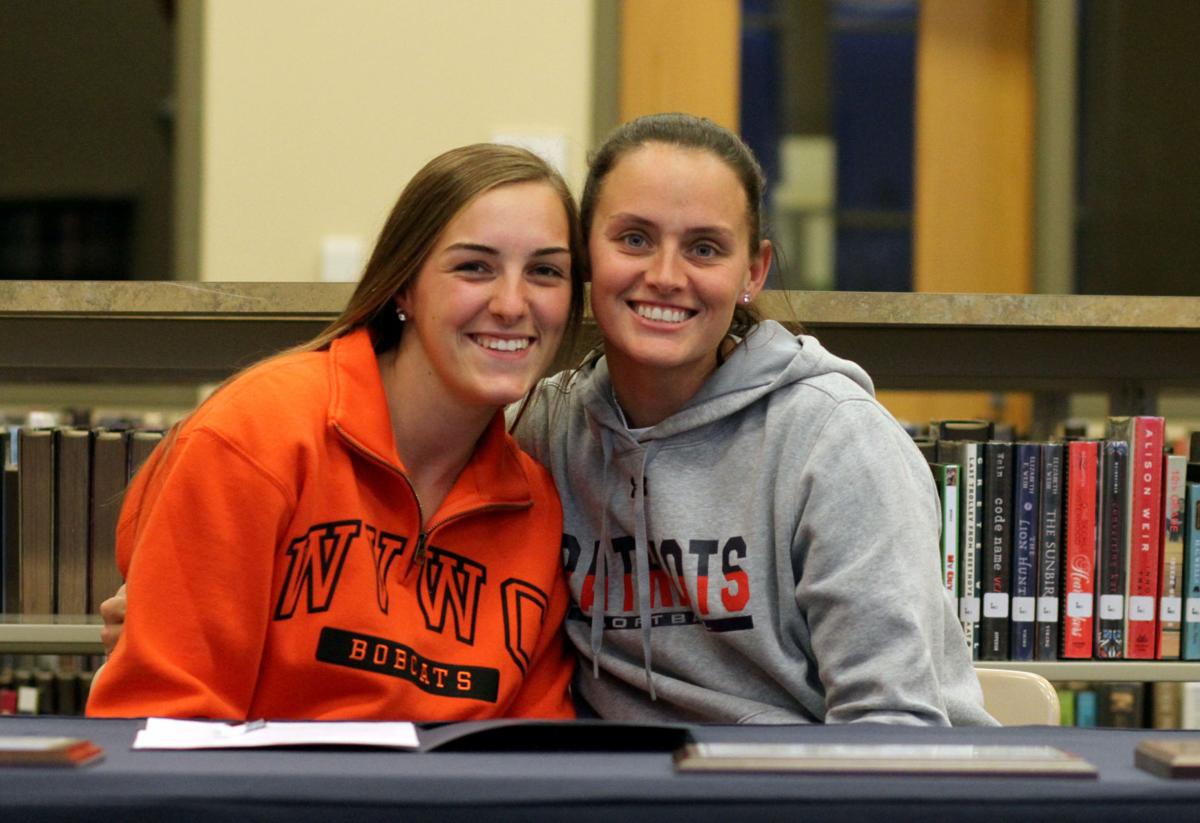 Cenate and her coach, Amanda Orkoskey, pose after Cenate signs with Wesleyan. 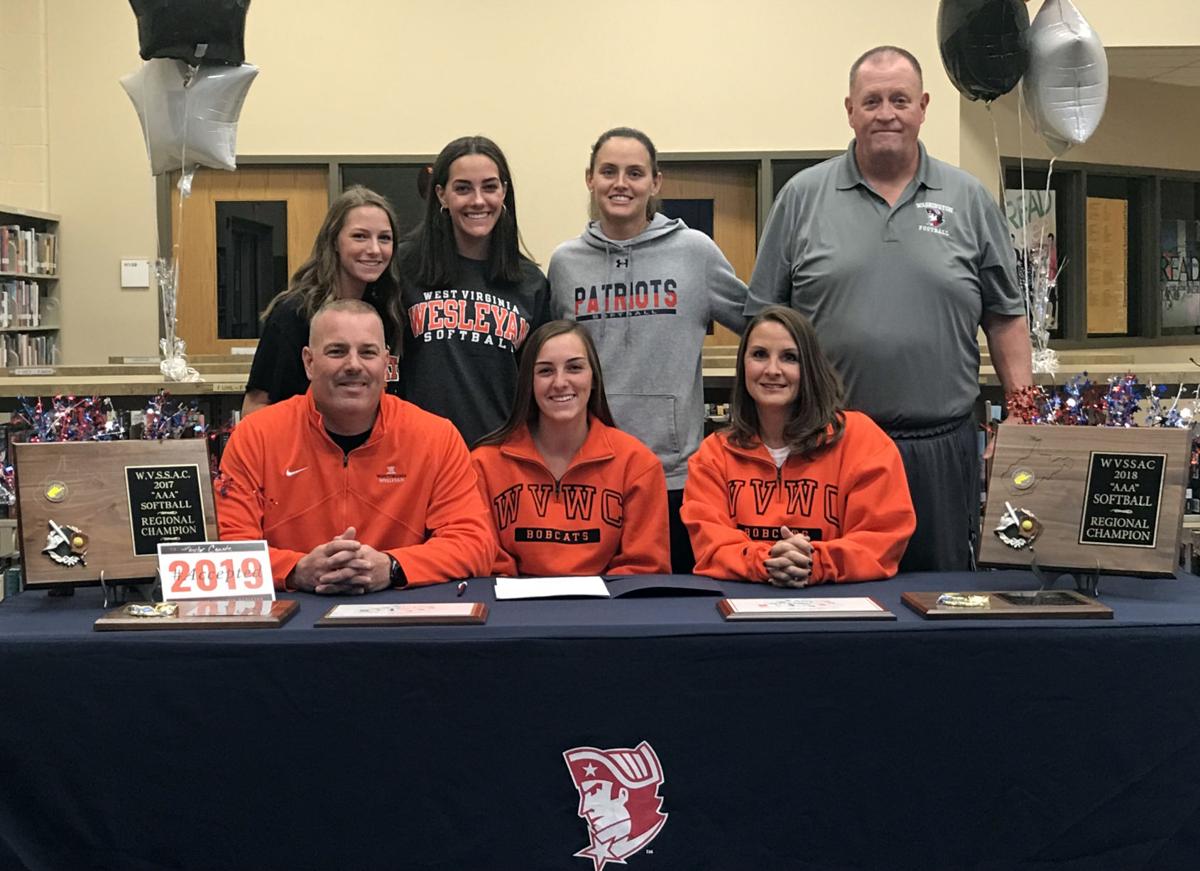 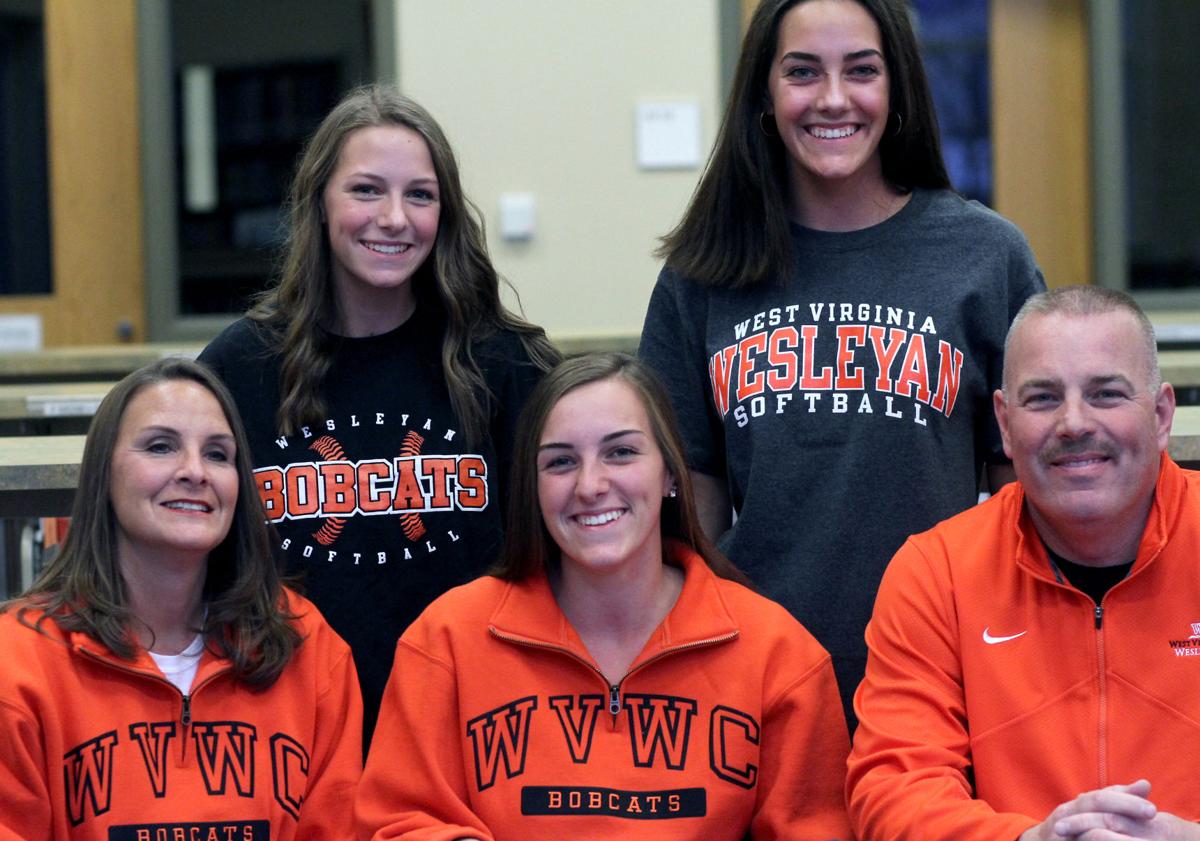 The Cenant family is all smiles after Taylor signs with Wesleyan. 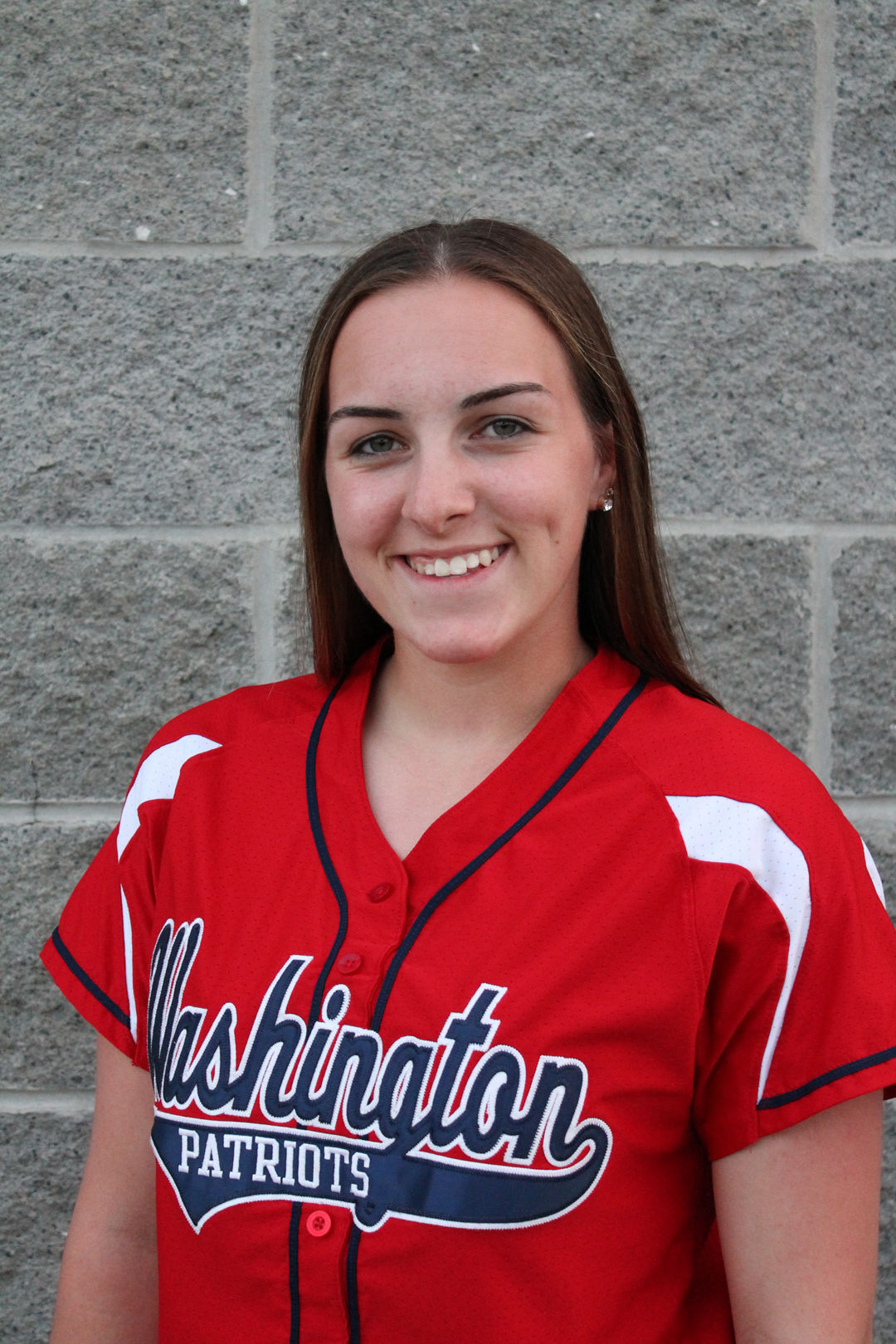 Surrounded by her parents and sisters, Taylor Cenate officially signs with West Virginia Wesleyan’s softball program. Wesleyan is a Divison 2 college and part of the Mountain East Conference.

Cenate and her coach, Amanda Orkoskey, pose after Cenate signs with Wesleyan.

The Cenant family is all smiles after Taylor signs with Wesleyan.

Taylor Cenate hit the ground running her freshman year, and in the last three years has made a name for herself within the Patriot program.

Cenate was shining in her freshman year, but truly broke out in her sophomore campaign. Now a standout pitcher among her peers, Cenate has accumulated a stunning stat line in the last two seasons at Washington High – one that caught the eye of West Virginia Wesleyan’s Steve Warner.

Totaling 47 pitching appearances, she has struck out 147 batters and opponents only hold a meager .377 batting average against her. Opponents also only have 107 hits and have crossed home plate 64 times. Additionally, the Patriots have averaged 4.9 runs allowed per game since their 2017 opener. Cenate also holds a commanding .974 fielding average.

When Cenate joined the Patriots three years ago, she reported that she was nervous until the team took her into their fold immediately.

“Going into my first season, I had one of the softball girls in my gym class, so I was a little nervous, but the team took me in like I had been there for years. It was a warm, welcoming feeling,” she reported after her sophomore season. “Basically our thing is ‘stronger together’ and that’s how we are — we’re stronger when we play together.”

That was the year Cenate led the Pats to the state tournament for the first time in program history. She did the same the following year, and hopes to close out her senior year with the obvious – the AAA state title. If anything, she’ll be vying to top her own personal records, something she uses as motivation each year. “I’m really proud of myself, and I can say that I’m not done yet,” Cenate said. “I’ve already broken school records, so my goal is to do that again, break other records and go back to states. As for college, I can’t wait to see the impact that I can make at Wesleyan.”

Cenate holds multiple school records, including season wins (14), career wins (29), win/loss percentage (82 percent) and earned run average in a season (1.90). This year, however, her main goal is to live in the moment and absorb as much as possible.

“First we have to win the section and regionals, but my ultimate goal is to take every moment in and enjoy my final season. I expect myself to maintain the high standard we have as a team, and I expect to push my teammates and for them to push me in return. I think it’ll be worth it in the end,” Cenate said.

Head coach Amanda Orkoskey has always thought highly of Cenate. In 2017, Orkoskey was quoted as saying Cenate is a “great player, student and person.”

To this day, nothing has changed in Orkoskey’s mind. “Taylor is a great person in general. Her communication is great, both verbally and physically – she’s great to push the tempo in our practices and conditioning. I’m super proud of her, and she deserves everything that she’s accomplishing because she’s such a hard worker. I’m excited to see how she excels this upcoming season and further down the line at Wesleyan,” Coach Orkoskey said.

“Her drive stands out to me the most. She’s a little hard on herself, but she truly wants to succeed. She uses that [mentality] to drive herself and keep pushing as hard as she can. She’s going to be a great asset for Wesleyan – I used to play at Shepherd, so I know how good the Bobcat program is. I’m excited for both her and Wesleyan.”

And if Wesleyan softball is known for anything, it’s their talent. The ‘Cats have been led by Steve Warner for the last 26 years, and have seen tremendous success in his tenure. Warner holds a 1043-366-1 record in Buckhannon, and has won the regular season title 19 times. His teams have also claimed 17 WVIAC/MEC tournament titles, and have made five NCAA Super Regional appearances in 2012, 2014, 2015, 2016 and 2017. In 2017, the ‘Cats moved on from a deafening 10-1 mercy win over the West Chester Rams to play in the NCAA Divison II World Series. Wesleyan fell to No. 2 Minnesota State-Mankato 5-2. MSU-Mankato would then move on to topple first seed Angelo State (TX) to win the Series.

Aside from the team’s accomplishments, Warner has also coached 19 “Pitchers of the Year” award winners. Hannah Vet, a pitcher and 2018 graduate of WVWC was named as a NFCA All-American last year – great news for an up-and-coming star like Cenate.

The No.2 Lady Bobcats ended their 2018 season with a 43-14 overall, 28-4 conference record. In the Regional tournament, Wesleyan began with a close 4-2 loss at the hands of No. 7 West Virginia State in Game 1, but fought back to knock No. 6 Seton Hill (Pa.) and the Yellow Jackets out of the tournament on Day 2. Wesleyan defeated Gannon University (Pa.) in the first game of Day 3, but then fell to the Golden Knights 9-7 in the title game.

Base on balls against: 24