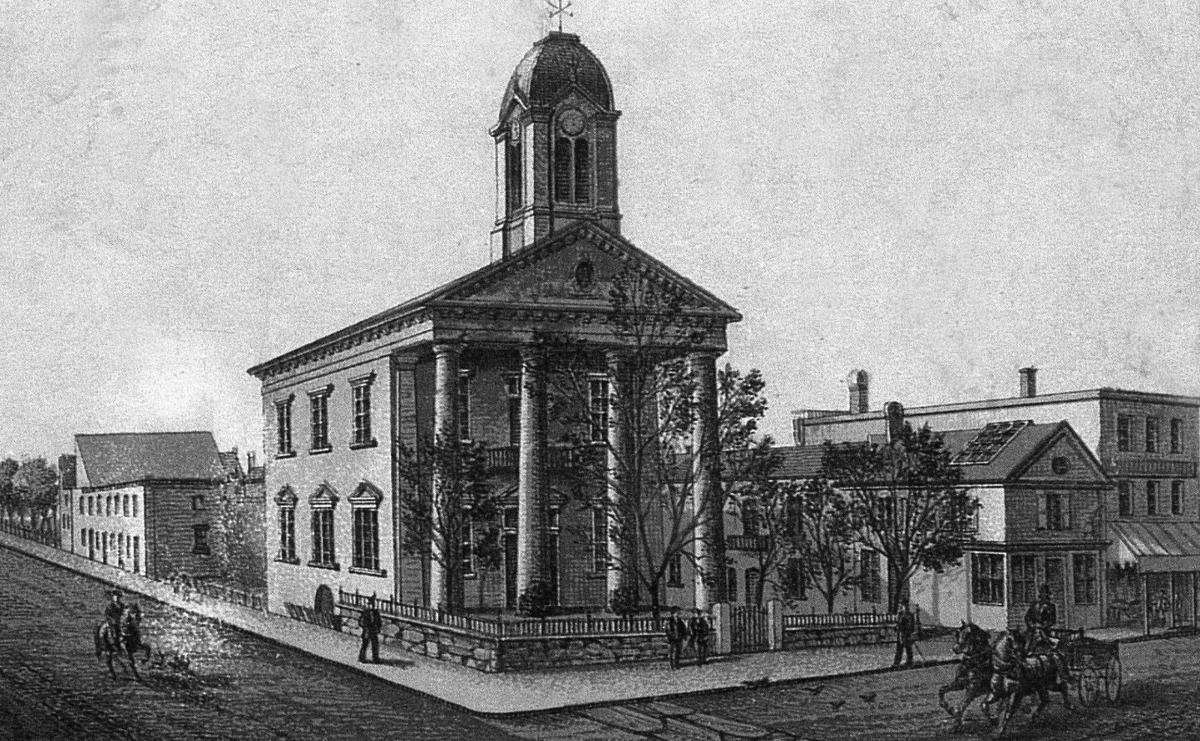 Jefferson County Court House is shown in the 1880s. The new Law Building built in 1880 is directly behind the Court House and fronts on North George Street. 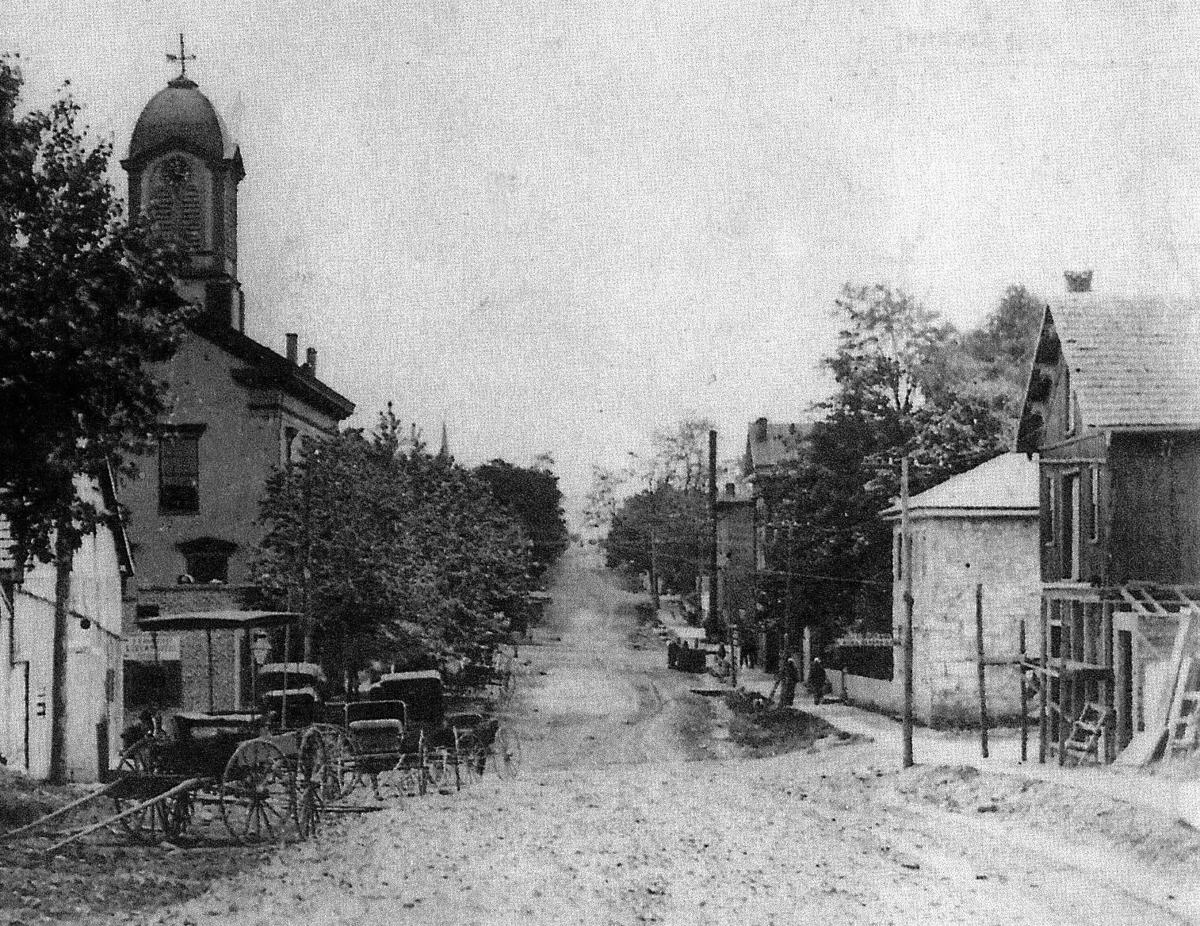 North George Street looking south as seen in the 1890s. The new Law Building behind the Courthouse is just barely visible on the left of the photo. From the archive of the Jefferson County Museum. 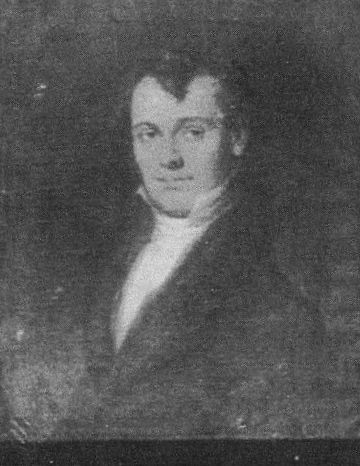 A portrait of Andrew Hunter.

Jefferson County Court House is shown in the 1880s. The new Law Building built in 1880 is directly behind the Court House and fronts on North George Street.

North George Street looking south as seen in the 1890s. The new Law Building behind the Courthouse is just barely visible on the left of the photo. From the archive of the Jefferson County Museum.

A portrait of Andrew Hunter.

Until the 1870s, the ground behind the Jefferson County Court House was vacant. When Charles Town was restored as the County Seat, there was discussion regarding leasing the lot as a means of generating income to help offset costs of renovating the Court House. In the spring of 1877, the Honorable James Murray Mason was awarded a twenty-year lease “for a part of the Court House lot” by the County Court. Mason’s intention was “to erect thereon a handsome, fire-proof building fronting 96 feet on George Street and running back 30 feet.” The Court specified that the building must contain eight to ten offices as well as “a library room capable of accommodating 10,000 volumes.” Lawyer Mason indicated that he had “already awarded a part of the contract” and that the contractor had told Mason that he intended to “commence work at once.”

The Law Library was as critical as office space. Several years prior to Mason’s proposal, the Jefferson County Law Library Association, headed up by attorney Andrew Hunter, was formed to “provide a permanent footing” for the “Library of the late Judge Bushrod Washington,” for thirty years an Associate Justice on the Supreme Court of the United States. When Justice Washington died, he had no children and his law library was inherited by his nephew, John Augustine Washington III. Colonel Washington was killed in September 1861, and Justice Washington’s library was willed to the colonel’s son Lawrence. When Lawrence received the library, he lent them to the Law Library Association which had them placed in the “Library Room in the Court House.”

In the plans for his proposed law office, attorney Mason indicated that he intended to place his law library “of upwards of 3,500 volumes” in the new building’s library room. By 1877, the Law Library Association held a collection, which included Justice Washington’s books, of well over 3,000 volumes. In Andrew Hunter’s opinion, combining these libraries will “give Charlestown the most valuable Law Library in the State.”

Sometimes plans go awry. In July 1879, two years after Mason announced his proposal to build a law office, the space behind the Court House was still a vacant lot. The County Court announced that Mason had “surrendered to the county all his rights” under the lease which he was granted in 1877. Anxious to rent the ground, the court announced a new lease, this time for 35 years, to a group of six Charles Town attorneys. Attorneys George Baylor, James Francis “Frank” Beckwith, Daniel Bedinger Lucas, and James Murray Mason, William Hicks Travers, and William Lyne Wilson each “agreed to improve said lot with a building.” The six attorneys agreed to erect a structure “containing at least apartments of convenient size for offices.” With an eye on safety, the lease specified that the building must be of brick and have either a slate or metal roof. The lease also required that the building be used only for law offices or “for other businesses connected to the courts.” Finally, the court specified that when the lease terminated, the building would revert to the county “free of any cost or expense.”

The attorneys hired James W. Butt, a local carpenter and builder, to erect the new “Law Building,” and construction got underway in the fall of 1879. In his advertisement, Carpenter James Butt claimed that when construction orders were received, he would “execute the same promptly and satisfactorily.” He was a man of his word. In the Spirit’s first issue of 1880, Publisher George W. Haines announced “ the gentlemen of the legal fraternity who propose to occupy the new ‘Law Building’ are, with one exception, now snugly ensconced therein and the Law Library has also been removed thither.” In less than six months, the new “Law Building” was open for business.

The Law Library Association held its January 1880 meeting in the new Law Building. The first order of business was the disposition of the law library presently housed in the Court House. Plans were made to move the law books from the Court House to their new home made especially for them in the law building. Once that was settled, the association turned its attention to a number of resolutions aimed at “the increase and preservation of the Library.” Each was proposed, thoroughly debated, and then approved by those in attendance. The final agenda item was the special recognition of one of Charles Town’s most respected attorneys, 76-year-old Andrew Hunter. For six decades, Hunter practiced law in Charles Town and was the Commonwealth’s Attorney in 1859 who prosecuted John Brown and his men. In the resolution, Hunter was elected an honorary member for life of the association and lauded as one “who has been so long the leader of the Bar of this Valley, and who has deservedly a national reputation.” Messrs. Beckwith and Lucas were chosen to inform Hunter of his honor and also to advise that the association would obtain “an engraving or photograph of Mr. Hunter to hang up in the Library.” The association acquired a portrait of Andrew Hunter which remained in the library until 1910.

In 1910, the County Court made plans to construct an annex to the Court House. It is interesting to note that the architect who designed the annex was the same Washington, D. C. firm, T. A. Mullett & Co., which designed both the Bank of Charles Town’s new bank building on West Washington Street and the building for the Farmers' and Merchants' Deposit Company on the southeast corner of the Public Square. To make room for the construction of the new Court House annex, Lawyers’ Row was cleared away from the lot. Apparently, the attorneys who occupied those offices at that time, Frank Beckwith, George M. Beltzhoover, Jr., and George T. Light, were not aware of the building’s original lease which stated that the building would revert to the county “free of any cost or expense.” The three attorneys sought and received payment from the County Court as compensation for their loss. Beckwith received $350, Light $450, and Beltzhoover received $200. Before the Law Building was removed, the Law Library returned to the Court House, and the portrait of Andrew Hunter was taken to the Court House where it was hung on the wall in the County Court’s meeting room.

– Doug Perks, a retired history teacher and Shepherdstown resident who serves as the historian at the Jefferson County Museum in Charles Town, is a contributor to the Spirit of Jefferson