You have permission to edit this article.
Edit
News
Opinion
Sports
Obituaries
Legals
Subscribe
1 of 6 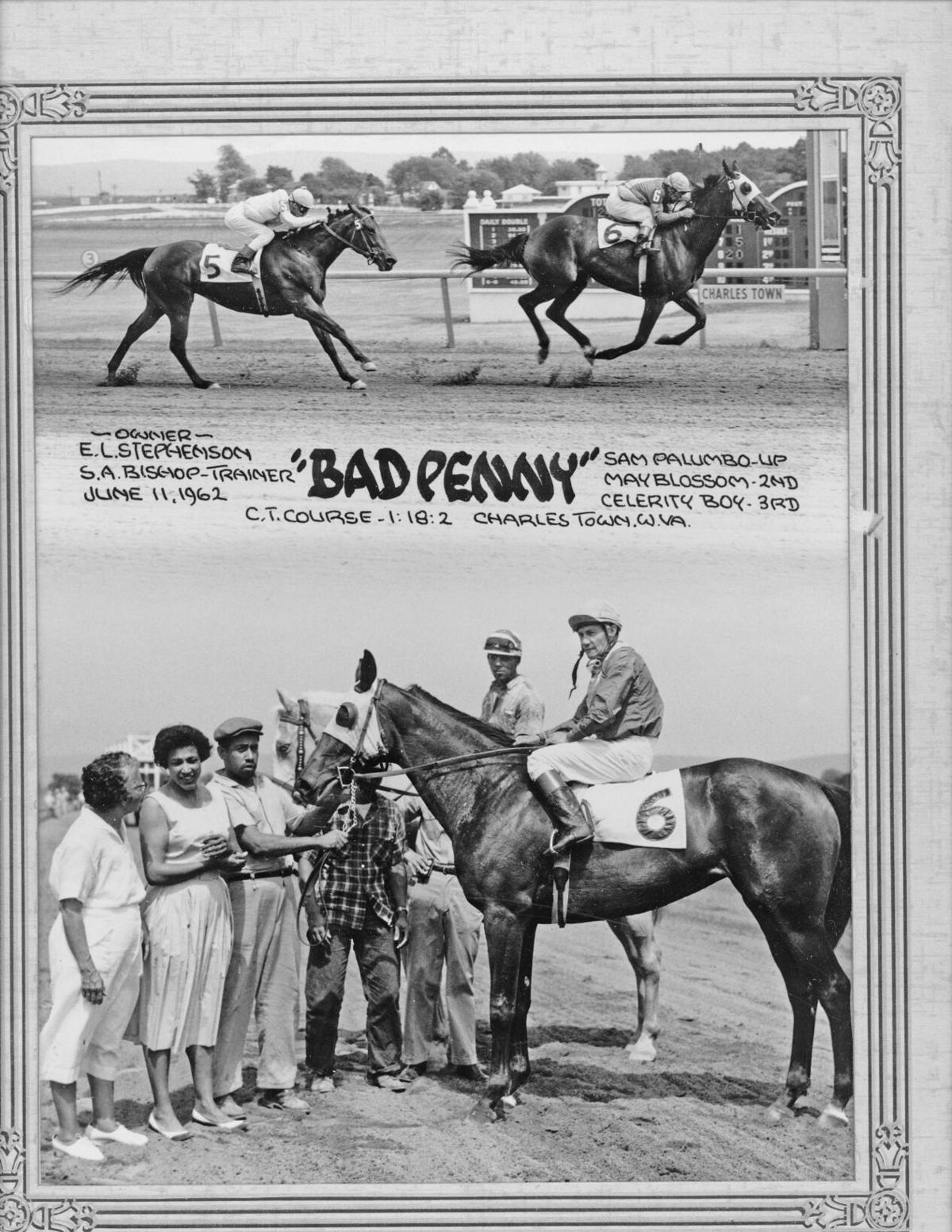 In the winner’s circle at Charles Town on June 11, 1962, Sylvia shares an exciting win with her mother, Bertha Rideout  (far left), and her brother, Govenear Rideoutt, holding Bad Penny, owned by Ed Stephenson. 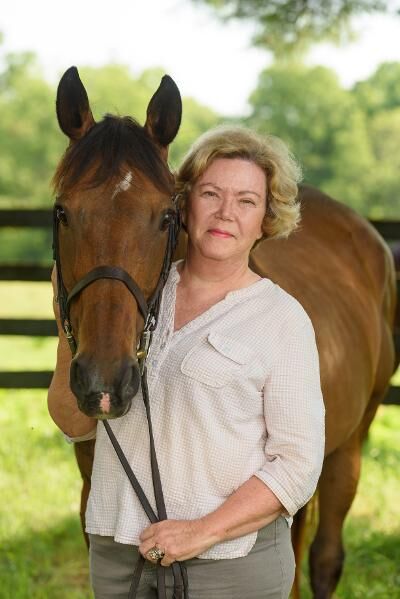 Author Vicky Moon is shown above. A hardback autographed postage free copy of the book ‘Sylvia Rideoutt Bishop Had A Way With Horses’ is available online from the author, www.vickymoon.com, and on Amazon.com. A few copies will be  for sale at the Charles Town Library. 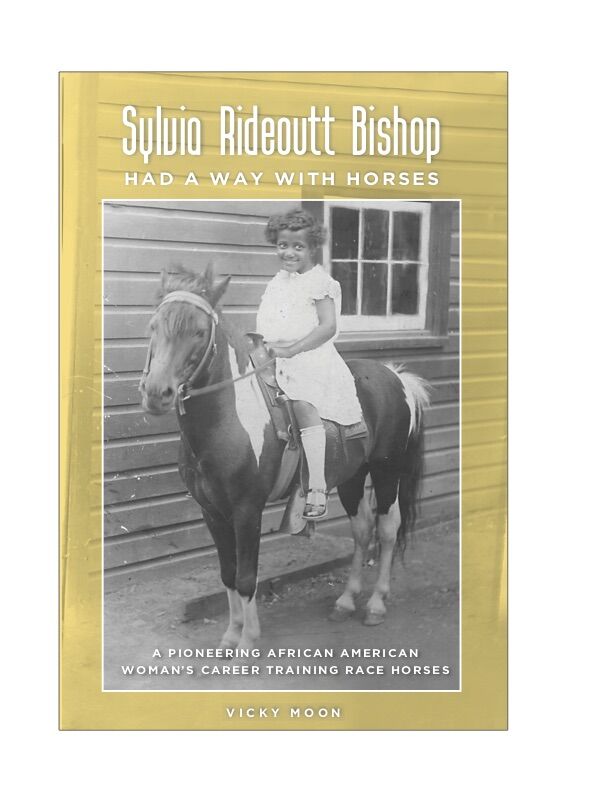 The cover of Sylvia Rideoutt Bishop Had a Way With Horses. 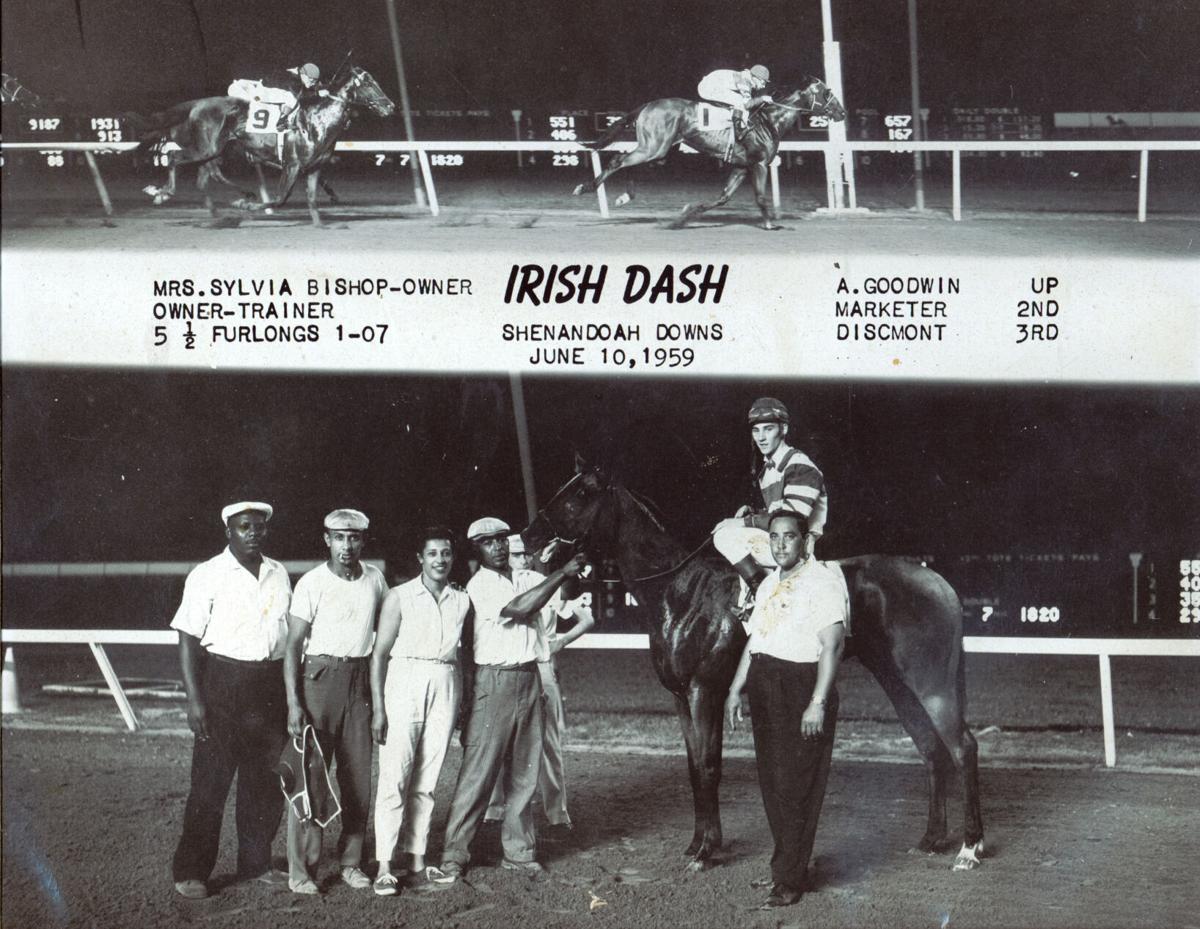 Irish Dash was one of many horses that Sylvia Bishop owned and trained. She was forever trim and dressed smartly as demonstrated here in the winner’s circle at Shenandoah Downs on June 10, 1959. 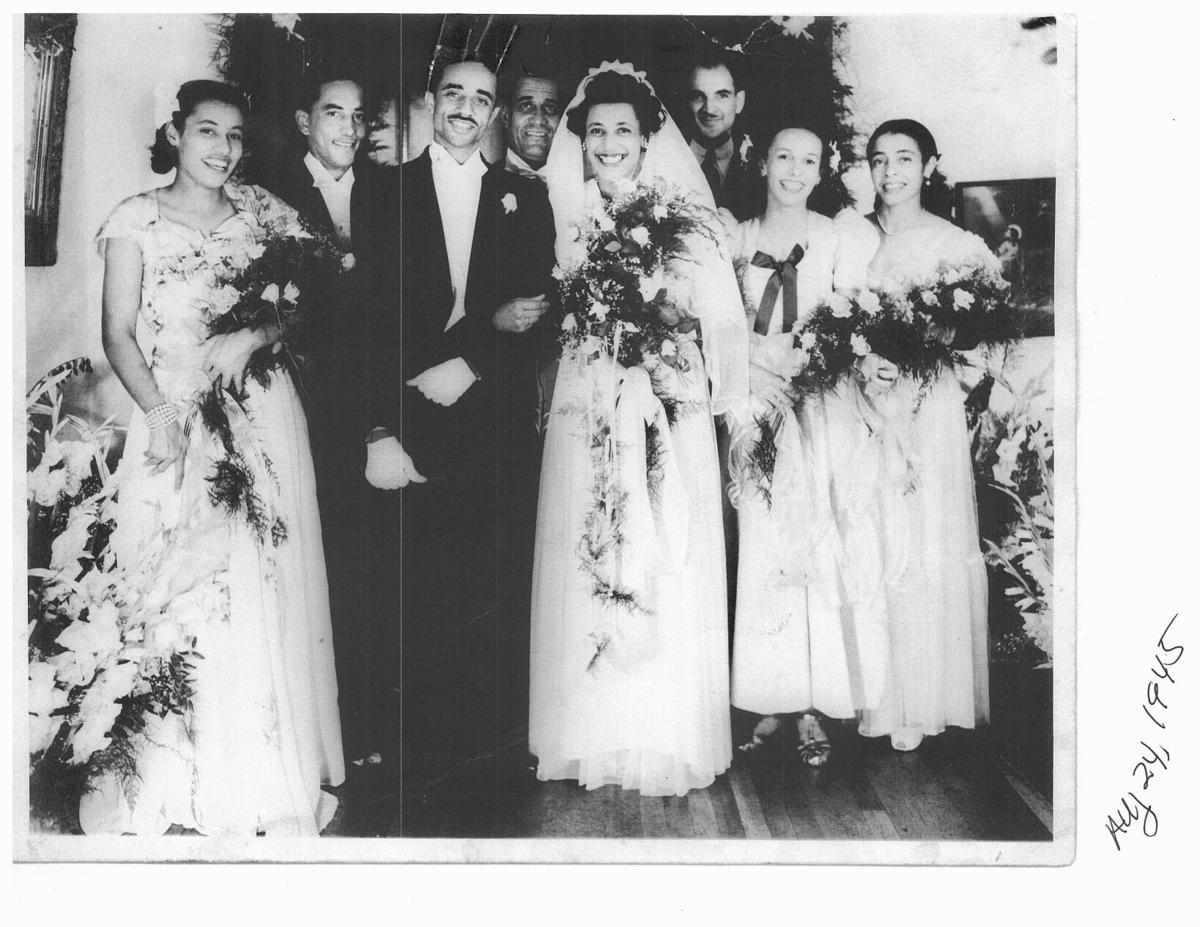 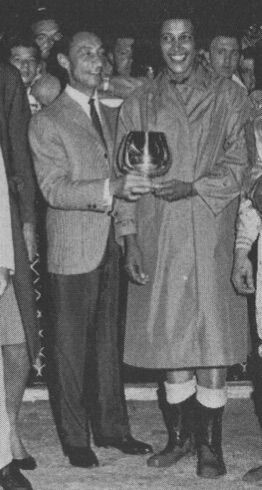 In the winner’s circle at Charles Town on June 11, 1962, Sylvia shares an exciting win with her mother, Bertha Rideout  (far left), and her brother, Govenear Rideoutt, holding Bad Penny, owned by Ed Stephenson.

Author Vicky Moon is shown above. A hardback autographed postage free copy of the book ‘Sylvia Rideoutt Bishop Had A Way With Horses’ is available online from the author, www.vickymoon.com, and on Amazon.com. A few copies will be  for sale at the Charles Town Library.

The cover of Sylvia Rideoutt Bishop Had a Way With Horses.

Irish Dash was one of many horses that Sylvia Bishop owned and trained. She was forever trim and dressed smartly as demonstrated here in the winner’s circle at Shenandoah Downs on June 10, 1959.

Sylvia Rideoutt Bishop was a woman who broke barriers, on local and national levels, and in horse racing circles.

After getting her start at the Charles Town racetrack as a 14-year-old grooming horses, Rideoutt Bishop, a life-long resident of Charles Town, became the first licensed female African-American horse trainer in the United States in 1961.

She grew up during an era when people of color were looked down upon, treated with little or no respect, and, many times, were subject of much physical and mental abuse.

She also had the challenge of being a single mother after two failed marriages, which meant taking on extra work to make ends meet.

Rideoutt Bishop, however, perservered. As times and attitudes changed, she continued to find success later on in life.

The Middleburg, Va. resident, and author of 10 books, recently published a book telling how a Charles Town resident met challenge after challenge on her way to building a successful career at the local race track and earning her eventual national acclaim in horse racing circles.

Sylvia Rideoutt Bishop Had a Way with Horses was written by Moon last year. Her 39-chapter, 198-page book is the result of 15 years and countless hours of sifting through newspaper records, horse racing records, numerous trips to Charles Town and the surrounding area, local libraries, many interviews and, most important, multiple interviews with Rideoutt Bishop herself.

At times, Moon wondered if this book would ever be published, but it rolled off the presses at Berryville Graphics in Berryville, Va. in December, about two months ahead of schedule. The book is now available on Amazon.

Since she came from such a large family, Rideoutt Bishop, as a 2-year-old, was sent to live with a nearby family who had no children. Although she remained close with her birth family while she grew up, Rideoutt Bishop never really reconciled the situation.

It was at this point in her life horses became a huge focal point, setting her on an eventual path to a successful future.

Rideoutt Bishop’s encounter with a pony named Targa proved to be a catalyst in her future career in horse training.

That short ride on that pony inspired and gave her purpose in life at a very young age.

Nothing else mattered beyond this point.

Rideoutt Bishop was forever hooked on horses. She wanted to train and own horses someday.

Her knowledge of horses grew as she got older. Her expertise soon became popular among horse trainers nationwide.

Moon’s book combines the story of Rideoutt Bishop’s journey through discrimination with the evolution of the acceptance of African Americans in modern American society.

Rideoutt Bishop’s biggest stumbling block may not have been exclusively the color of her skin. She was a woman, trying to find success in a male-dominated world.

Horse training was no exception.

When she married her former husband, John Bishop, in 1945, he took the credit for her achievements. Sylvia had to stay in the background doing all of the work.

She had broken though a major barrier. In the many years that followed, Rideoutt Bishop had her share of ups and downs with owning and training horses.

There were financial successes and failures, a risk that goes with owning and training race horses, but time proved she was going to survive and achieve success on a national level, no matter the odds. There was no way she was going to give up a job she loved.

A chance meeting put Moon on her path to reaching out to Rideoutt Bishop.

“I met someone in a line to get a cup of coffee who was related to her,”Moon said.

Before Moon could even begin to put together her latest book, she was going to have to speak to Rideoutt Bishop herself. What she found was a woman who was fairly easy to talk to.

When Moon visited Rideoutt Bishop for the first time at her Charles Towers apartment, located on Augustine Avenue (old U. S. 340), she was simply told to walk in after knocking on the apartment door, and that it was not locked.

“Come on in, the door’s open,” Moon recalled of that first interview with Rideoutt Bishop. “I didn’t know what to expect at first. I called her, asking if I could come to where she lived and talk to her. She agreed.”

What followed would be the first of a series of interviews with Rideoutt Bishop, which proved to be the source of many fond memories for Moon.

Instead of talking about Rideoutt Bishop’s life as a horse trainer right from the start, Moon asked about the woman’s early childhood. It was easy to get into a conversation with Rideoutt Bishop.

With the main subject of her book cooperating, Moon’s task got a little bit easier. Still, she was a long way from getting started on her manuscript.

“We spent many hours together in her apartment there in Charles Town,” Moon said.

“When she would show me a photograph, or tell me a story about a horse, I understood. I don’t think every writer would understand that.”

“I was always a horse girl,” Moon said. “I’ve loved horses all my life. I understand all of that.”

She was able to relate to Rideoutt Bishop, so having that advantage helped guide the conversations along.

In the interviews that followed, Moon listened with great interest as Rideoutt Bishop told her life story, one which wasn’t always pleasant, but was interesting to say the least.

Moon said she already had a contract to write a book about horses, but as she got to know Rideoutt Bishop, Moon sensed another book would be in the works.

“When I met her, and went to her apartment and she showed me all of her photographs, I knew that I had to write a book just about Sylvia,” Moon said.

The more Moon talked with Rideoutt Bishop, the more passionate she became in hunting down the facts and history.

Turns out this book was going to be more than just about Rideoutt Bishop.

Along the way, Moon’s interviews with Rideoutt Bishop and the many years of research took a bit of a side trip.

As she continued research for her latest book, Moon stumbled onto much of Charles Town’s history, which included how the city got its name, how many of the streets got their names and how the horse racing industry became a major part of the business community.

“I had no clue about the history of this town,” Moon said, adding in the beginning, Charles Town was part of Virginia, before the Civil War resulted in the creation of a separate state, West Virginia.

Rideoutt Bishop wasn’t the only person of color who had to fight racism, bigotry and discrimination in the area. Moon’s book mixes that part of the town’s history in with Rideoutt Bishop’s triumph over adversity, which paved her way to success in horse racing circles.

“There are so many horse people who never get past the racetrack and don’t appreciate the history of the town. I guess I was guilty of that too at the time,” Moon said.

The inclusion of Charles Town history in Moon’s book was a must. It was needed in order to establish the connection with Rideoutt Bishop’s life and her hard work toward what would be a major accomplishment in the advancement of the stature of African-Americans in the United States.

The horse racing industry had been a male-dominated occupation, but Rideoutt Bishop, who died Dec. 26, 2004, at 84, continued to chip away at that stereotype throughout her lifetime. Thanks to the efforts of Moon, her story can now be told in Sylvia Rideoutt Bishop Had a Way with Horses.