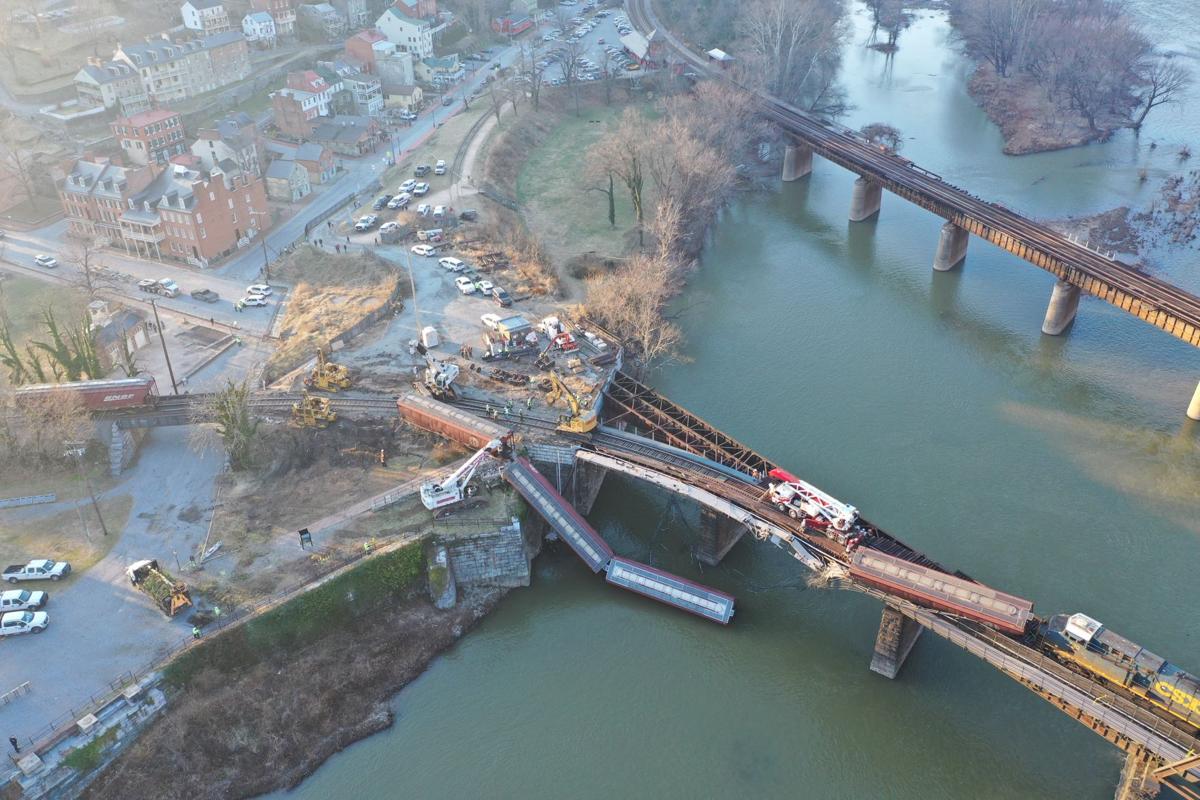 A trainwreck early Saturday morning sent several freight cars into the river and destroyed a scenic footbridge over the Potomac river. A crew with a crane was on the scene quickly and the cars were out of the river by Saturday night. 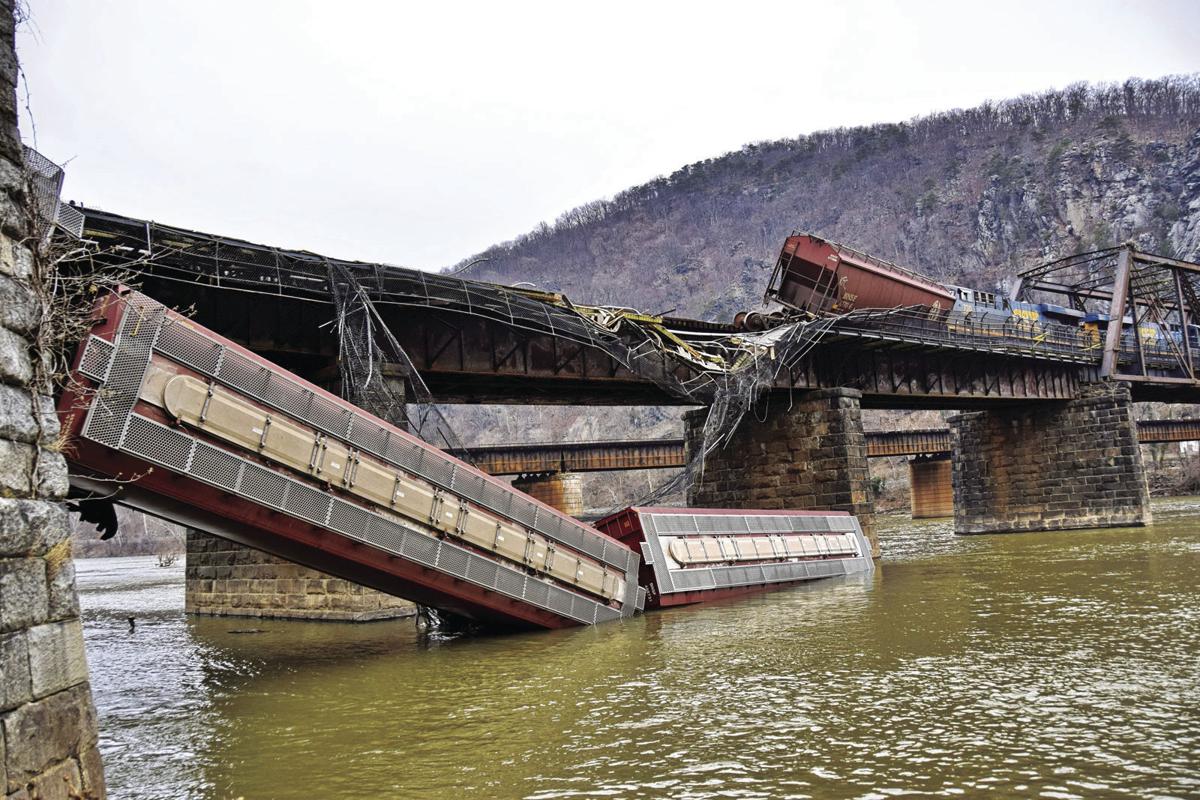 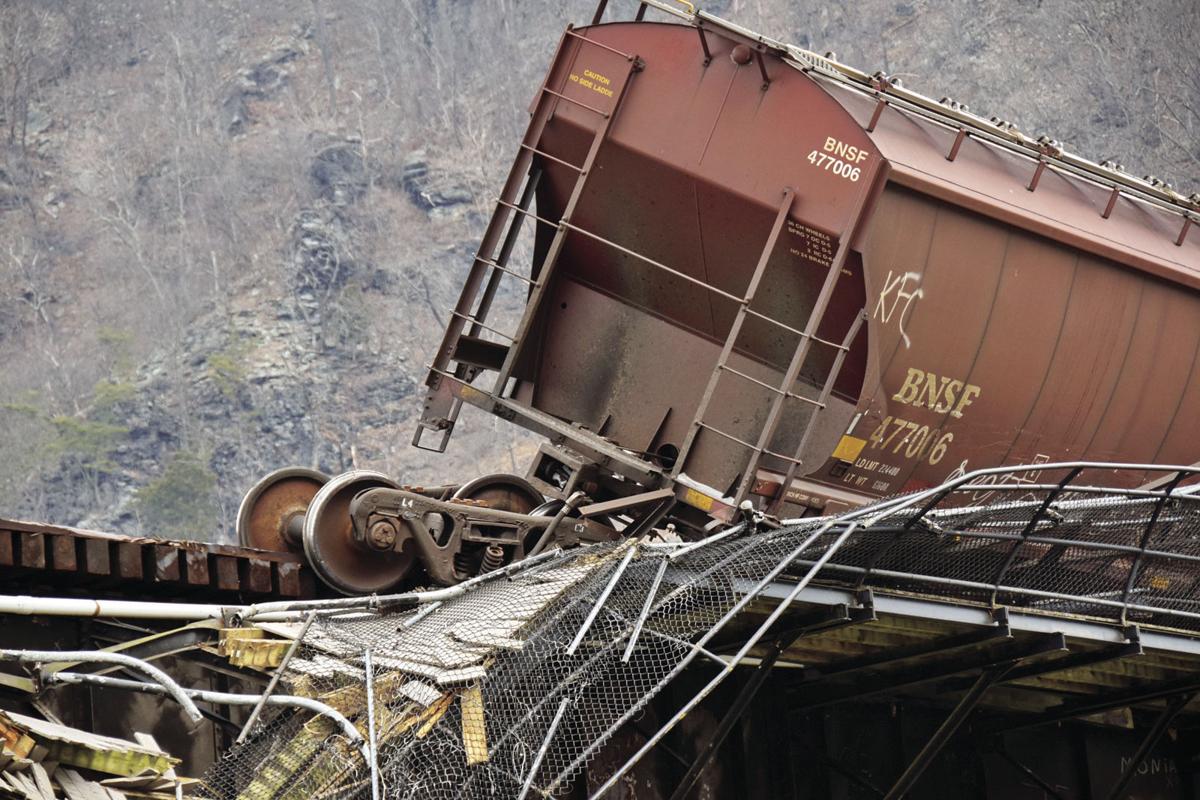 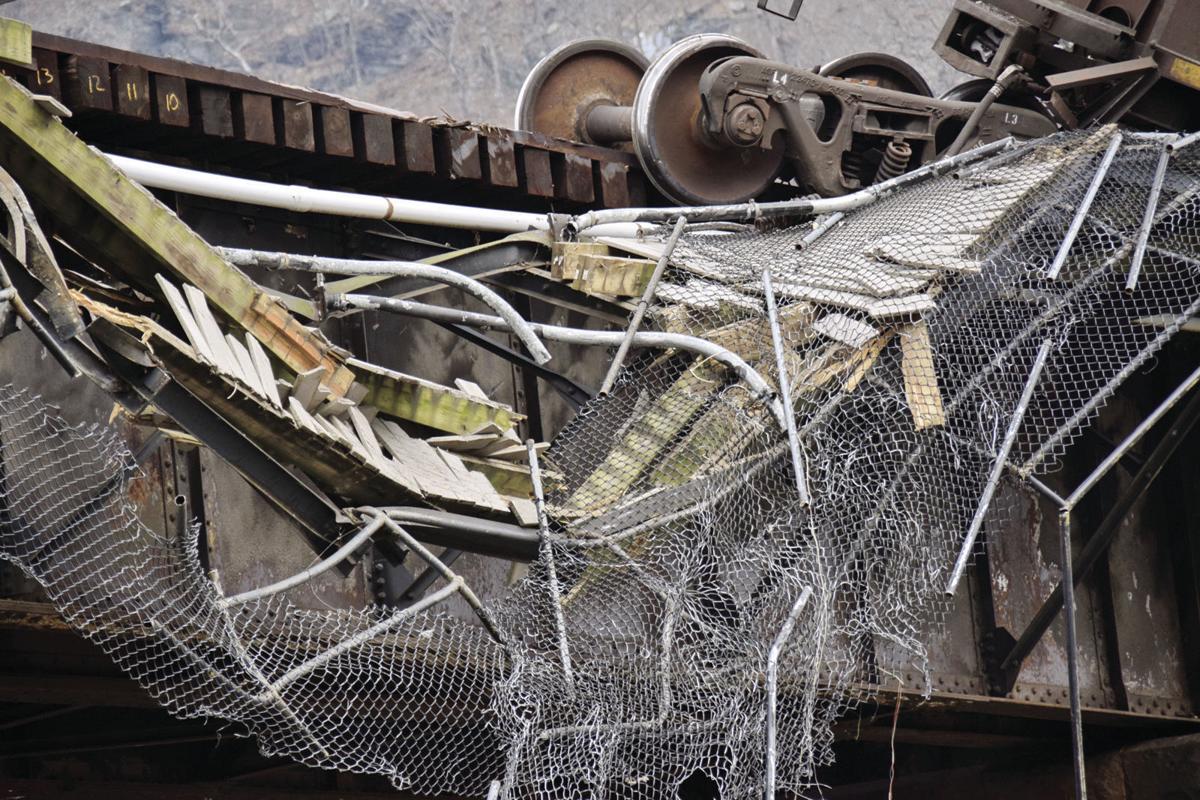 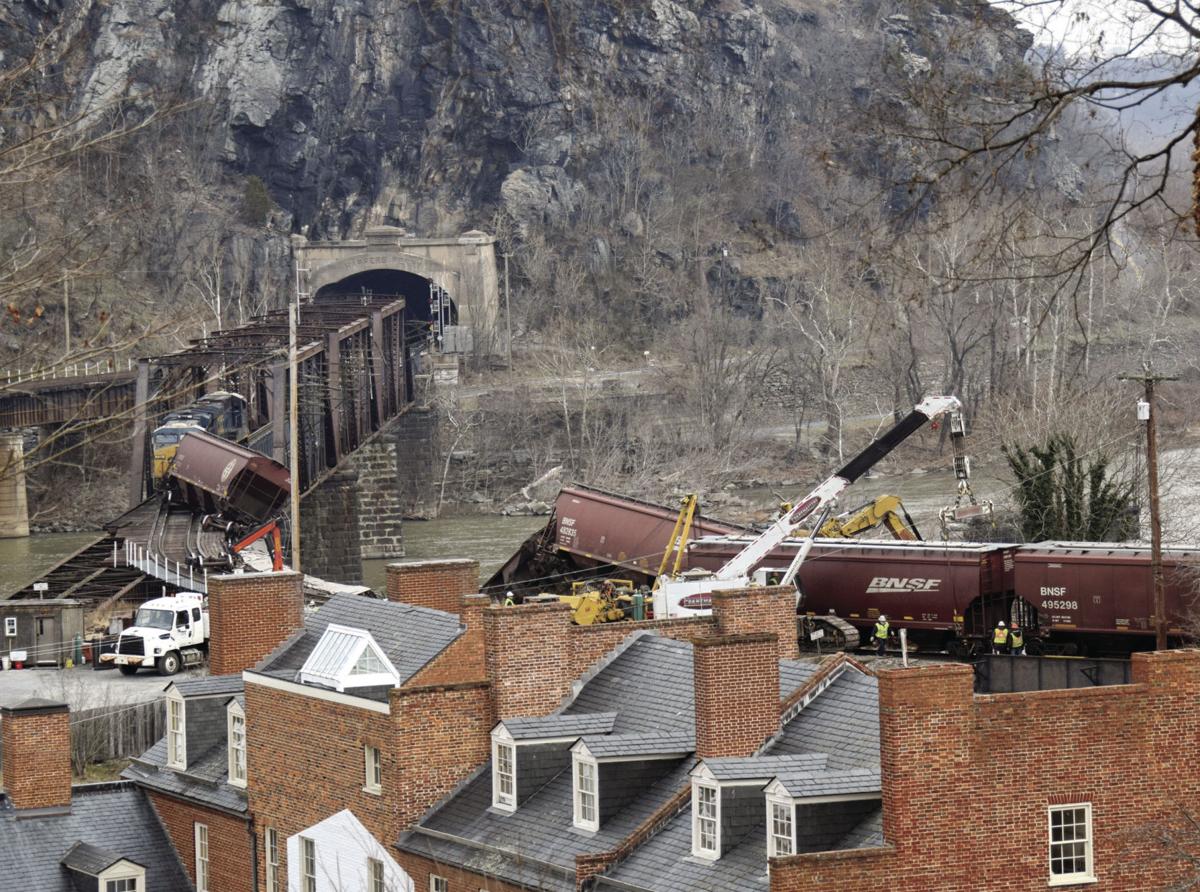 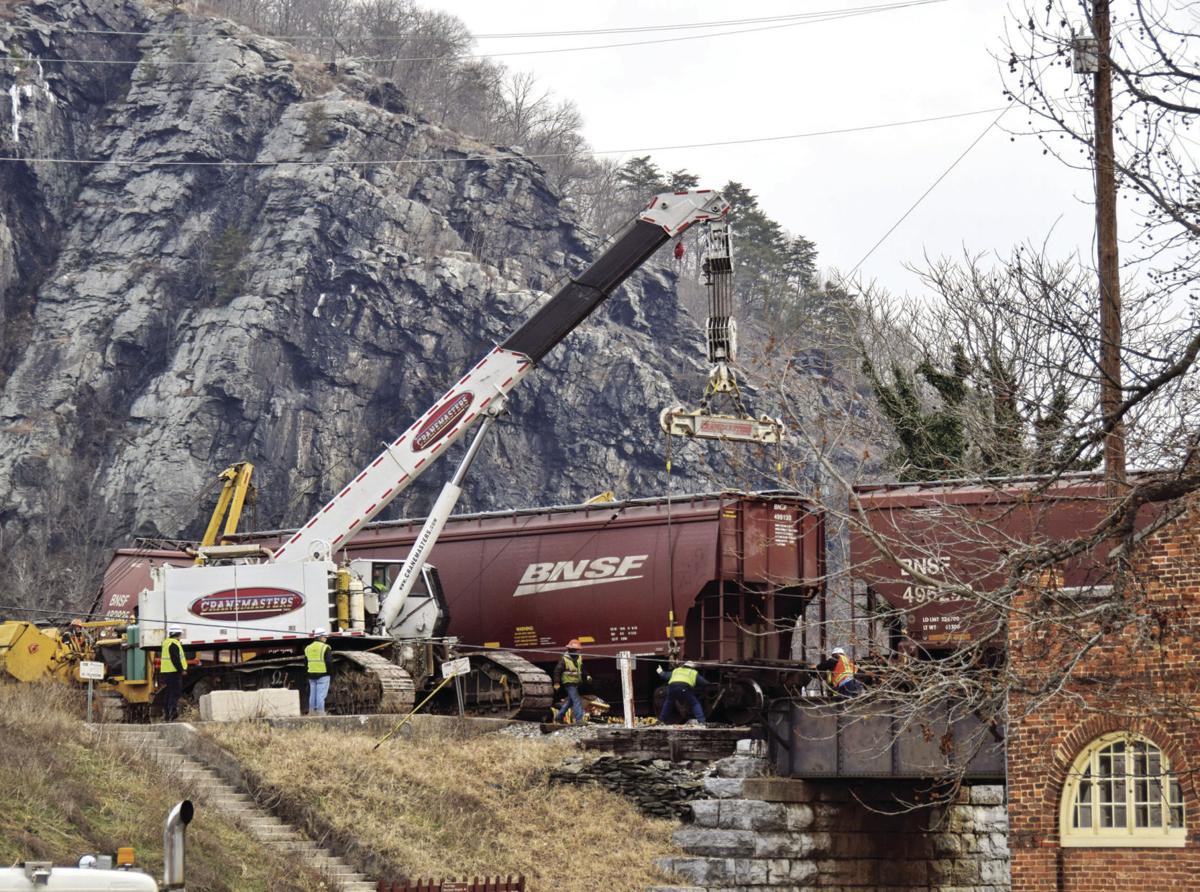 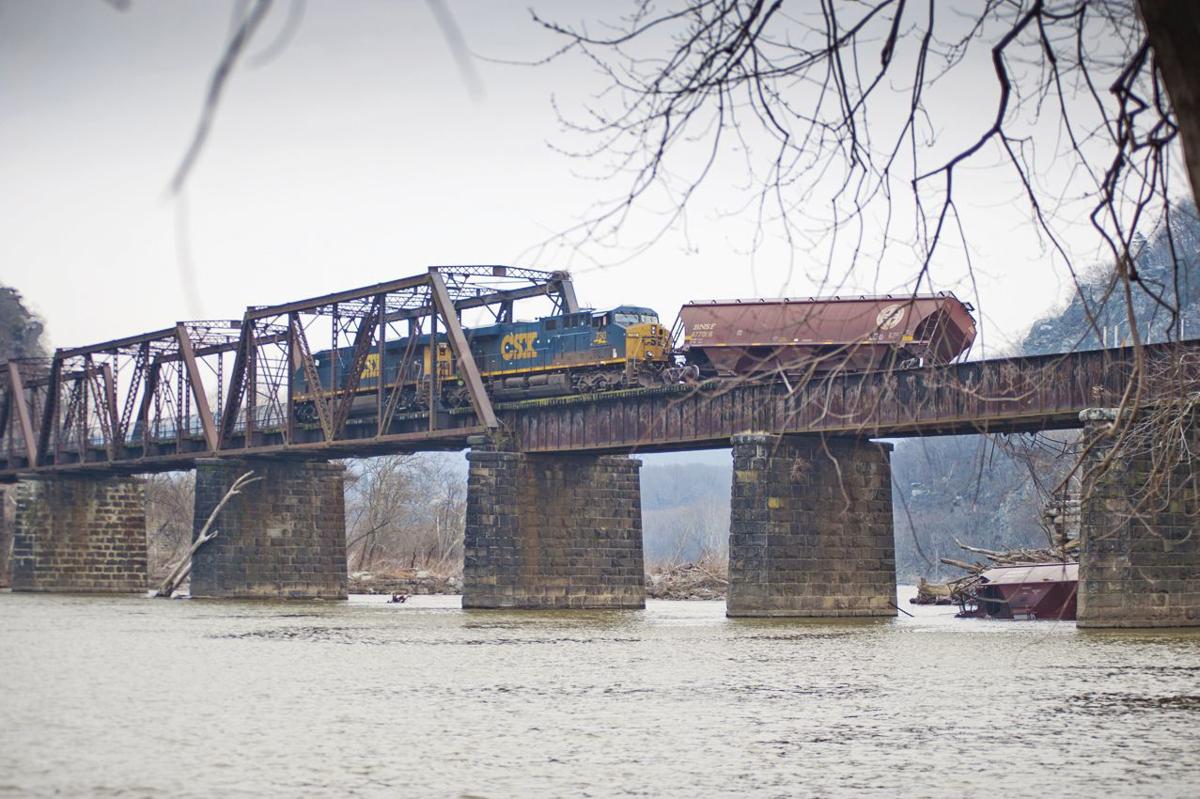 A trainwreck early Saturday morning sent several freight cars into the river and destroyed a scenic footbridge over the Potomac river. A crew with a crane was on the scene quickly and the cars were out of the river by Saturday night.

HARPERS FERRY – A footbridge over the Potomac River used by hikers and tourists in the historic Lower Town of Harpers Ferry will be closed indefinitely after a freight train derailed and destroyed the scenic crossing early Saturday, National Park Service officials said.

About 2:30 a.m. seven freight cars derailed on an eastbound CSX Corp. train that was crossing the Goodloe Byron Memorial Bridge near The Point lookout at the Potomac and Shenandoah rivers, officials reported.

The section of the damaged footbridge—which is part of the Appalachian National Scenic Trail—is connected to the railroad bridge.

No injuries were reported. All of the derailed freight cars, including two that landed in the Potomac, were empty.

CSX was still investigating the cause of the accident on Monday.

AMTRAK and MARC train services are not affected by the accident.

The freight rail company said in a prepared statement that it would work swiftly to clean up and restore the area that the derailment damaged. Construction cranes had removed the derailed freight cars as Saturday evening, and freight train traffic had begun crossing the bridge again.

Tourist sites that include The Point lookout were still temporarily closed Monday as construction and recovery crews continued repairs.

In addition to Appalachian Trail backpackers, the footbridge is used all year by Harpers Ferry Historical National Park visitors to reach the Chesapeake & Ohio National Historical Park towpath in Maryland and the historic Maryland Heights trail and lookout above Harpers Ferry.

The Byron Bridge pedestrian footbridge was added to the railroad bridge in the 1980s to allow the Appalachian Trail to pass through the Lower Town of Harpers Ferry, according to Chris Craig, a longtime hiker who represents Harpers Ferry on Canal-Town Partnership, a coalition of towns along the C&O that preserve and promote the canal as a recreation attraction.

“We are so glad that the wreck happened during night time so no pedestrians or bikers were injured, but we will miss the pathway tremendously while it is down,” Craig stated.

The Appalachian Trail Conservancy is working with the National Park Service to arrange temporary transportation to the recreation sites on the Maryland side of the Potomac. For information, visit the web page appalachiantrail.org/transportation.