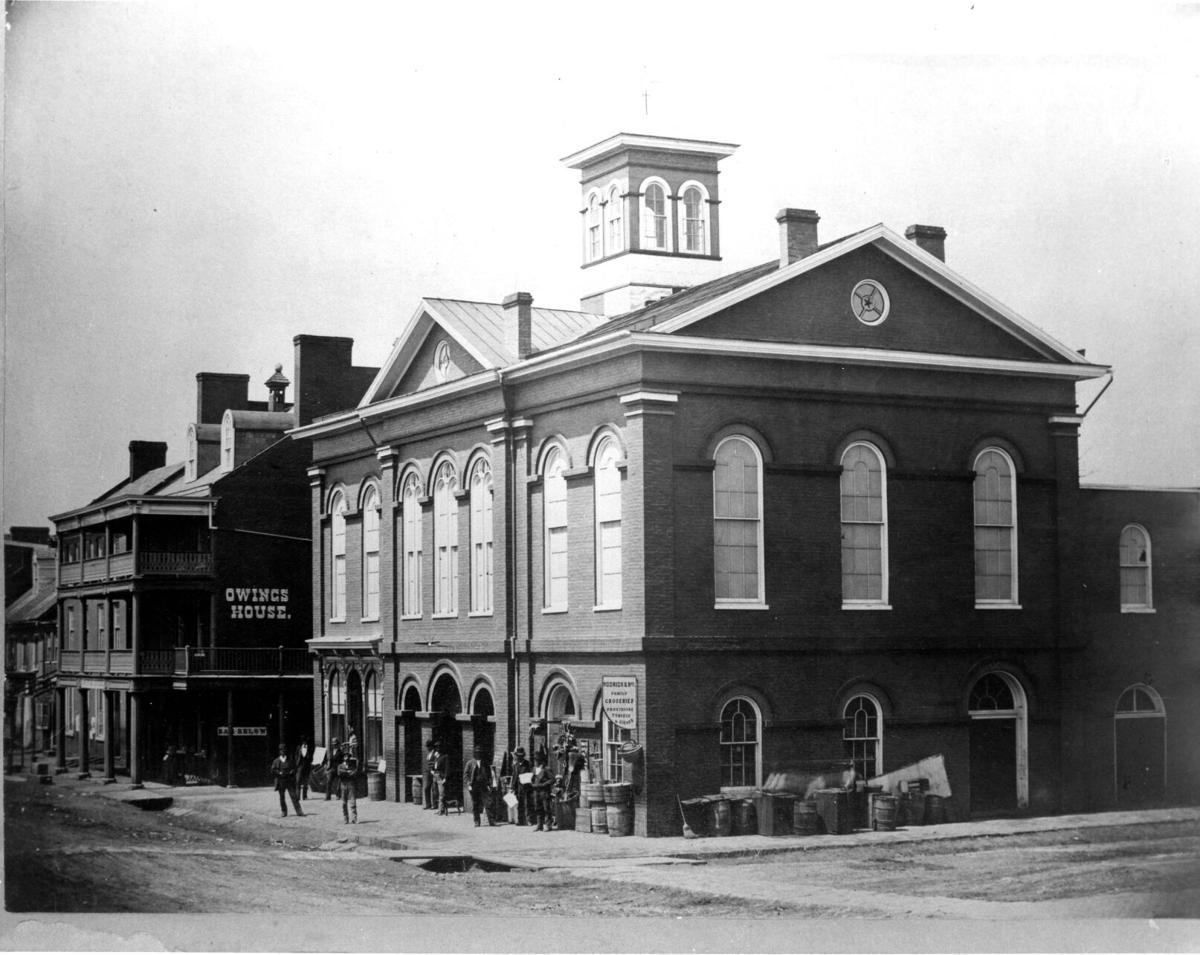 The third market house c. 1875. Charles Washington Hall is on the second floor. 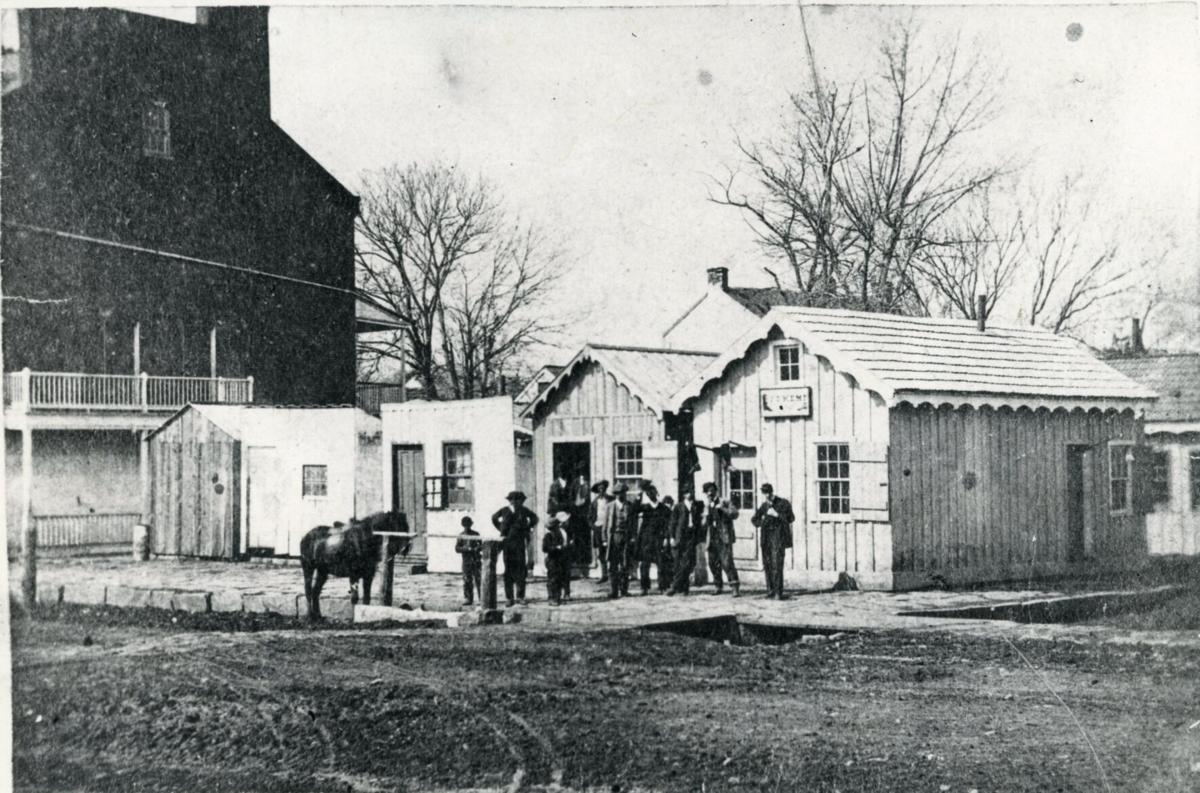 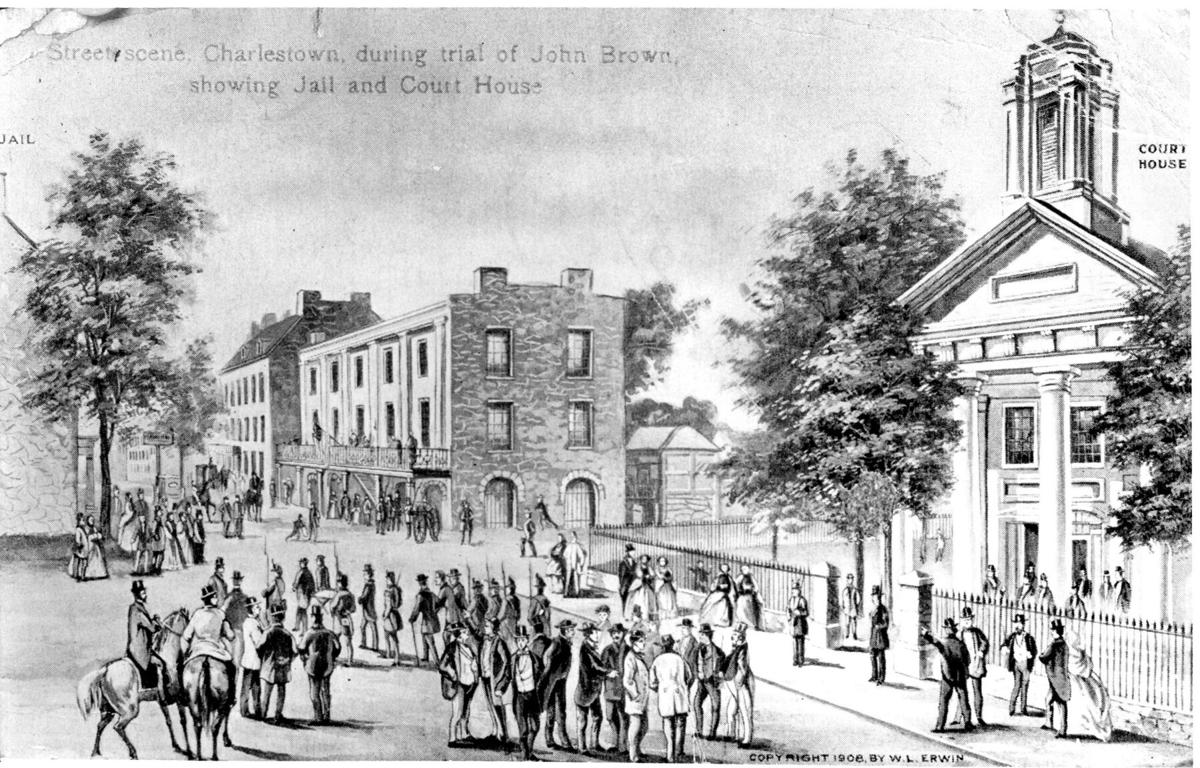 Public Square in 1859 during the trial of John Brown. The second market house is in the center, the Jefferson County Court House on the right.

The third market house c. 1875. Charles Washington Hall is on the second floor.

Public Square in 1859 during the trial of John Brown. The second market house is in the center, the Jefferson County Court House on the right.

Of the four public buildings on the corner lots where George Street intersects Washington Street, only one was mentioned by Samuel Washington, Charles’ youngest son, in the deed which granted the lots “to the inhabitants of the said town of Charlestown.” Samuel Washington specified that one of the lots was given “for the purpose of erecting a market house thereon.” It appears that construction on the first market house began in 1806. Ferdinando Fairfax, George William Fairfax’s nephew, was a Justice on the County Court and there is evidence that he contracted with James Anderson to complete the erection of brick walls on the gable end of the market house. Fairfax’s contract with Anderson provides our only glimpse of what the first market house looked like. The contract specifies that Anderson was to build brick walls a single course thick on the gable ends of the building, each end wall would have a chimney “to ventilate the building with fireplaces in each of the principal room, and the first floor of the building was to be “paved with brick laid in a bed of sand.” Anderson was paid $10 for every 1,000 bricks made and laid in the walls of the building.

Twenty-five years later, something was wrong with the market house. In an 1831 editorial, John S. Gallaher, Publisher of the Virginia Free Press, wrote:

We are glad to hear that the Trustees of Charlestown have it in contemplation to complete the Market House, which has so long been an “eye-sore” to the public. We hope, too, some effectual measures be adopted to restore a good market. At present, we sometimes find scant living, although surrounded by wealth and abundance.

It is unclear what had happened to the market house to make it an “eye sore to the public.” However, it is clear that “what to do about the market house” was a hot topic of discussion. The debate ended in 1834 when the Free Press, which had its office on the second floor of the market house, reported that “those in favor of improvement” wanted to tear down the old market place and replace it with a better building. Opponents sought judicial relief and drew up an injunction to halt demolition, but before the local judge could render an opinion, proponents of the new building “took a snap judgment and commenced on the old building before the question had been brought legally before Judge Douglass, and the old building is now razed to the ground.” A Mr. Bradley was hired as the contractor for the new market house, and he indicated that “he would start construction immediately, and that it will be but a few months before we shall have a handsome edifice on the site of the old structure.” Bradley built the three-story market house.

In 1852, the Corporation officers of Charlestown adopted a set of By-Laws and Regulations to provide a “well ordered and regulated Market” for the town’s citizens. In Charlestown markets were held year-round on Wednesdays and Saturdays. From October 1 to April 1, the Charlestown market was open from 5 to 9 a.m. and from April 1 to October 1, the market opened at 4 a.m. and closed at 3 p.m.

On the other five days of the week, other vendors advertised their wares for sale at the Market House. If you needed “Broad Axes, Adzes, and Rounding Knives,” Thomas Rawlins was your man at the Market House. If you needed a leather conditioner, Rawlins just received a barrel of Neatfoot [sic] Oil and could fix you up. Rawlins also handled the “Cumming’s Hay, Straw, and Fodder Cutters” which could be set up to operate by “either Hand or Horsepower.” Office space on the second and third floors was available for hire, and in 1857 Dr. Pierce advertised that he had moved his dental practice from the Sappington Hotel to the “office formerly occupied by the late “Wm. Lisle Baker, Esq., over the Market House.”

It all came to a screeching halt in the spring of 1862. Following its defeat at the 1st Battle of Winchester on May 25th, 1862 when the Union Army retreated up the Shenandoah Valley on its way to the Union garrison at Harper’s Ferry. Passing through Charlestown, Union General Nathaniel Banks suspected that the market house housed “supplies for the Confederates” and ordered that the three-story brick building be burned. The market house remained a burned ruin until the war’s conclusion when the site was cleared, and a number of one-story temporary commercial buildings popped up where the old building stood. For several years, butchers Young and Moore provided a constant “supply of fresh meat, as good as can be procured in the county” at their stall on Market House square. Harness maker Henry Middlekauff advertised that he could make or repair “Harness, Saddles, Bridles, Halters, &c.” at his establishment in the market house. J. J. Moran’s Boot and Shoe-Making shop was in the stall next to Middlekauff.

When renovation work on the Court House was nearing completion and construction of the new jail was underway, discussion began about what to do about the market house. This was of course a town and not a county matter. Specified by Samuel Washington in 1801 and affirmed by a judicial opinion in 1872, one-half of Lot No. 45 belonged to “the citizens of Charlestown.” The debate over rebuilding the market house dominated the town council’s meetings until mid-summer. On Wednesday, June 24, 1873, the Town Council of Charlestown approved the architectural plans for a new Market-House submitted by the contracting team of Holmes & Rust, completing a Public Square trifecta for the hometown builders. According to their plan, the new building would front 67 feet on Washington Street and 37 feet on George Street. The first story would be 13 ½ feet from floor to ceiling and the second story would come in slightly higher with 20-foot ceilings. The higher second floor ceiling was built to accommodate “a large town hall in the Western portion of the building, 44 feet 7 inches X 34 feet 8 inches in size.” Finally, Lee Hall could be retired, and downtown Charlestown would have an honest-to-goodness auditorium equipped with a real stage. Mindful of the constant threat of fire, Holmes’ original plan called for an engine-house on the west end of the building. On the opposite end, Holmes called for a large office, and the market house would be located in a 23 foot 4 inch by 35 foot 6 inch room “running through the centre [sic} from Main Street to the rear [of the building].” In mid-August, the work of removing the temporary stalls began, and by September 1, Holmes & Rust had started excavating for the foundation. By mid-September, the foundation was in place, the joists for the first floor were set, and masons had started laying the brick walls.

Work on the new market house progressed rapidly. The Oct. 21 issue of the Spirit of Jefferson reported that “work on the new Market House was resumed last week, and the second story is now being pushed forward as rapidly as possible.” Just before year’s end, the Spirit reported that “The cupola has been raised on the new Market-House, and Messrs. Duke & Gallaher, the contractors for the tin roofing, are putting the building under cover.” Once again, as had been done on both the Court-House and County Jail jobs, the contract work was let out to local builders.

Winter weather didn’t deter the contractors. In January all of the window sash and glazing had been installed. Holmes reported that he expected the plasterers to get to work before month’s end. Work on the distinctive arched brick pavilion began in early February and by March, the one on the west was complete and work on the east arch was underway. When the weather broke in April, the auditorium walls were plastered, and the exterior trim painting was underway. As the building neared completion, the town council turned its attention to one last detail.

As mentioned, since the end of the Civil War, James Lawrence Hooff had graciously allowed the public to use the second floor of his building as a meeting place. But it was just a room and was not designed for meetings. With the completion of the market house, downtown had a space designated as an auditorium, and the council decided that it needed a name. On Thursday, May 28, 1874, the town Council “selected the most appropriate name of ‘Charles Washington Hall’ as the most fitting title for the elegant new hall in the Market-House building. This name is given in honor of Charles Washington, the founder of Charlestown, and the donor of the ground upon which all of our public buildings are erected.” The council also determined that groups who used “Washington Hall” rent free must “bear the expense of opening, lighting, and closing” the hall. Note that initially the name “Charles Washington Hall” applied only to the auditorium on the second floor of the market house and not to the entire building.

In June, Edward Duke, the town’s recorder, began accepting applications for rental of “the Stalls in the Market House.” Once leased, the vendors signed a contract for a specified period of time, and when their lease expired, they were required to renegotiate to continue the rental. Leases were approved by the council and occasionally a vendor seeking a renewal was denied and replaced by someone new.

Very quickly, George T. Light rented the middle stall and opened a drug store. To encourage foot traffic, Light soon opened a “Circulating Library” in his store with a modest charge for borrowing his books. The Rodrick Bros. rented the east stall and set up their Family Grocery in that space. The auditorium debuted with a three-day musical extravaganza. The Charlestown Musical Association presented “An Evening with Dickens,” the operetta “Genevieve,” and the Charlestown Cornet Band led by Professor T. M. Turner. Kindly, the Spirit noted that “the entertainments throughout have been highly applauded.”

Within a decade of the end of the Civil War, the Public Square quartet was back in place. It is noteworthy that most of the work was done by local contractors. It is also noteworthy that Public Square is a model for change. The struggle for towns to remain viable is ongoing. Often the removal of old buildings is a sign of decline.

But in the case of Public Square, the renovations and replacement of the buildings on those historic four corners, occurring over more than two centuries, is a sign of vitality and not a symbol of decline. I think that Charles Washington would be pleased that he left those four lots “for the use of the citizens of Charlestown” and that they remain the heart of Charles Washington’s Town.