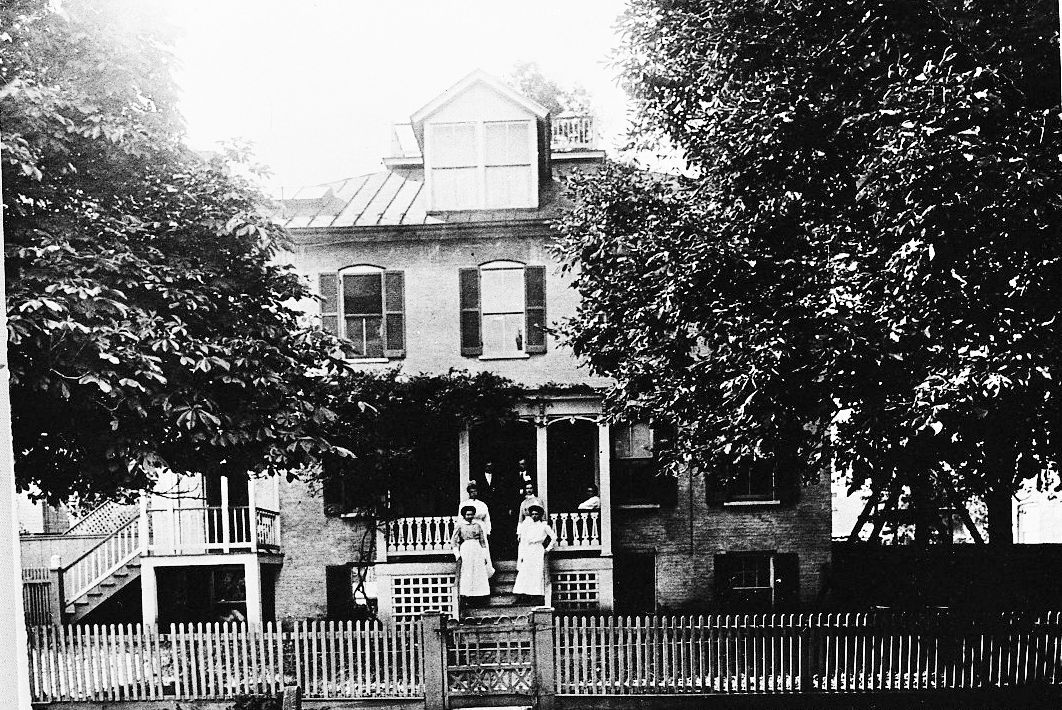 Dr. Richard E. Venning’s hospital is seen in 1908. It is presumed that one of the men on the porch may be Dr. Venning, and one of the women on the steps may be Anna Hughes. 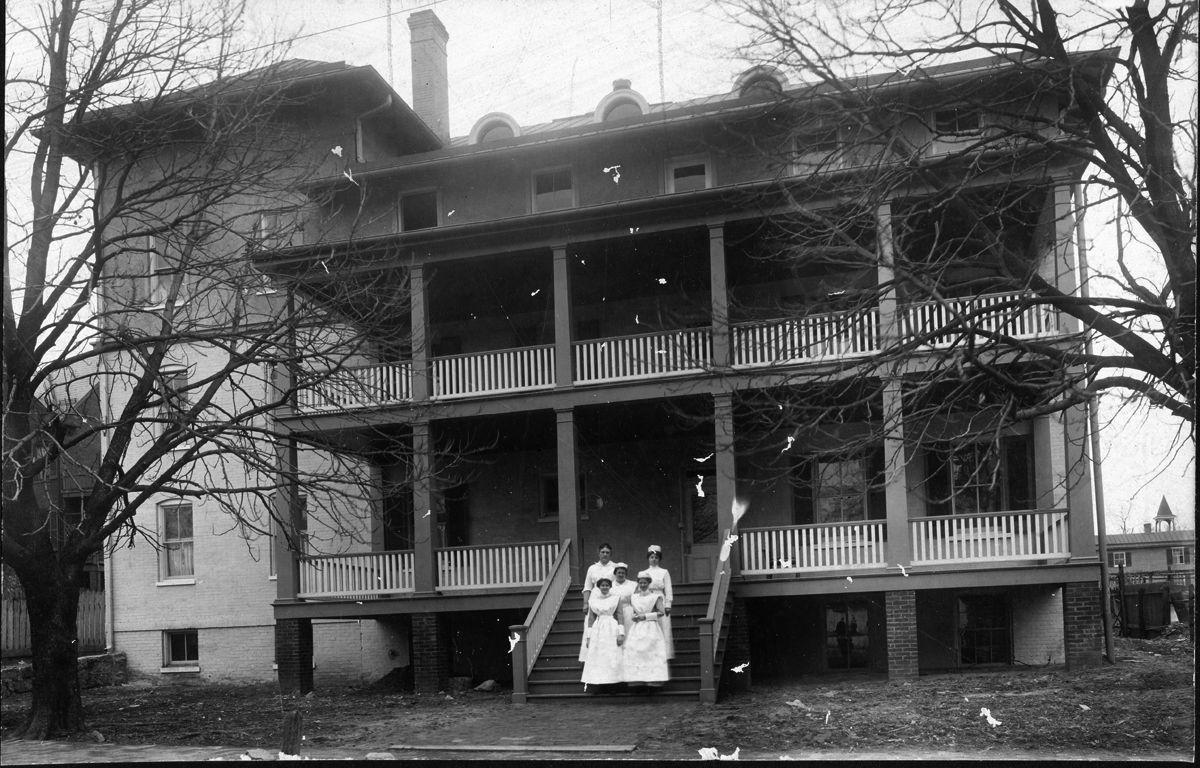 Charles Town General Hospital is seen in 1914. Note the addition of porches on the front, a third floor added to the original building, and the three-story brick addition on the east (left) side of the hospital.

Dr. Richard E. Venning’s hospital is seen in 1908. It is presumed that one of the men on the porch may be Dr. Venning, and one of the women on the steps may be Anna Hughes.

Charles Town General Hospital is seen in 1914. Note the addition of porches on the front, a third floor added to the original building, and the three-story brick addition on the east (left) side of the hospital.

Just before Thanksgiving Day in 1893, the Spirit of Jefferson announced that “a new accession to our town is Dr. R. E. Venning.” Dr. Richard Edmondston Venning was a native of Charleston, S.C., and a graduate of the University of Pennsylvania Medical College. After spending time at the Women’s Hospital in Baltimore, Md., Dr. Venning and his wife, Ethel Worthington Venning, moved to Charles Town where they took up residence “in the dwelling of Mr. W. W. Johnson, corner of Washington and East Streets.” East Street in 1893 is Church Street today which meant that the Vennings lived on the northwest corner of East Washington and North Church Street—across the street from Charles Town’s Postmaster George Hite Flagg and his wife Elizabeth Clemson Washington Flagg.

In the 1890s, the Spirit of Jefferson’s page three was reserved for local news items. Locals turned to the third page to be updated on the latest births and deaths, who was erecting a house and who was hired to build it, and detailed reports on people who were under the weather. Dr. Venning made page three on a regular basis. Guy, the 8-year-old son of John Hess, was severely burned when he accidently pulled over a tea pot pouring scalding water all over himself—Dr. Venning successfully treated young Guy. The foreman at Goetz Harness Factory, George Milton Slifer, severely injured his arm on a splitting machine—Dr. Venning performed surgery and saved Slifer’s arm. In 1901, 21-year old Melvin Talbott Strider had been sick at home for several weeks. His father, N. S. J. Strider, contacted Dr. Venning who correctly diagnosed appendicitis and performed surgery which saved young Strider’s life.

This was the era of home visits and when a doctor called on his country patients, he required a horse and buggy. To facilitate Dr. Venning’s appointed rounds, Charles Town merchant J. Wm. Miller, who sold “carriages, pianos, sewing machines and farm wagons,” graciously provided Dr. Venning with a “very stylish physician’s buggy.” In case anyone was interested, Miller noted that the conveyance supplied to Dr. Venning was a “fair sample of the elegant vehicles which” he offered for sale.

Presumably, Dr. Venning used his new horse and buggy to not only care for the sick and injured, but also to carry him when he assumed the role of teacher and preacher. In 1898, Mr. Wright Denny invited Dr. Venning to lecture to his Physiology class at the Charles Town Graded School, then located where the City of Ranson’s Town Hall is today. Dr. Venning spoke about muscles and the respiratory system and “was much enjoyed by the students.” Over the next several years Dr. Venning continued his visits to the graded school, sharing his expertise with Charles Town’s teens. On occasion Dr. Venning spoke to the Young People’s Society at the Charles Town Baptist Church, and on one evening his topic was “the barren fig tree.”

Although Dr. Venning made his rounds in a horse and buggy, he was not averse to using the latest in technology. In the fall of 1898, the Gordon Telephone Company was granted permission by Charles Town’s City Council to “use the public roads for the construction of a telephone system.” Of course, Charles Town would be the hub of the system and Reginald Fennel, Gordon’s general manager, told the Spirit of Jefferson that his plan was to connect Charles Town via telephone lines with Berryville, Harpers Ferry, and Shepherdstown. Like many progressive professional men, Dr. Venning signed a contract with Gordon Telephone and requested the installation of a phone in both his residence and office on East Washington Street.

After establishing himself in Charles Town, Dr. Venning decided to purchase a house. On October 14, 1901, Dr. Venning paid $4,000 for Lot Nos. 39 and 40 improved by a house and outbuildings. The two lots fronted on West Congress Street and ran all the way back to West Avis Street. Bordered on the west by South Charles Street, the lots were bounded on the east by an alley which ran all the way from Congress Street to Avis Street—one full acre of land! The house became a home for his young family, and as most physicians did, he had his office there.

Jefferson County was a battleground during the Civil War, and every time the two sides clashed casualties always occurred. After each fight, many houses, public buildings, and occasionally churches became field hospitals dispensing care to wounded men. Since the Civil War, there were no hospitals in Jefferson County. Dr. Venning’s purchase of the house on West Congress Street would change that, and his house would soon serve another purpose.

After three years on West Congress Street, Dr. Venning recognized the need for a hospital in Jefferson County. Selflessly, he decided to share his home with patients who required surgery and who were so ill that they required round the clock care. Almost every issue of one of the county’s weekly newspapers related that someone or the other was being treated at Dr. Venning’s Hospital. C. C. Frazier was treated at Dr. Venning’s for several weeks, and “returned home yesterday much improved.” George W. Duke was treated at the hospital “for cancer on his face.” In 1905, the Norfolk & Western Railroad appointed Dr. Venning a railroad surgeon and indicated that “emergency cases occurring anywhere along the line from Shepherdstown to Basic City will be taken to Dr. Venning’s hospital in Charles Town for treatment.” The railroad also recognized Dr. Venning as the first railroad surgeon in Jefferson County. Within a decade, Dr. Venning had established himself among the best medical practitioners in the area.

Within weeks, the weeklies reported that folks were being cared for at the Anna Hughes Sanitarium in Charles Town. Because he owned the entire block, Dr. Venning decided to build his “residence on the hospital lot at the corner of Charles and Congress streets” and moved his family to the new house when it was completed. Older Charles Town residents remember that the house built by Dr. Venning, today owned by American Public University, was the residence and office of Dr. Mildred Williams.

Hughes continued management of the hospital until 1912. In February of that year, a group of local businessmen and doctors purchased Dr. Venning’s hospital and established the Charles Town General Hospital which was chartered by the State of West Virginia. As compensation for “the parcel of land improved by a brick hospital building thereon,” Dr. Venning received 160 shares of the new corporation valued at $25 per share.

In addition, he was made a director of the hospital and was joined by Dr. Abner Osbourne Albin, Thomas Clagett Bowling, John Bunyon Brazier, Woodrow Asbury Higgs, Dr. Samuel Tanner Knott, Dr. William Neill, William Opie Norris, Thornton Tayloe Perry, Dr. Francis Murray Phillips, Samuel Lee Phillips, William Rouss, Dr. Charles Locke Skinner, and Charles Francis Wall. The hospital was operated by a board of managers comprised of W. W. Rouss, president, C. L. Skinner, vice president, W. O. Norris, treasurer, and Dr. A. O. Albin, secretary. They announced that the hospital would be open to the “physicians of the county” under their supervision. The new board of directors began making plans to enlarge and improve the existing hospital.

In July 1914, the hospital’s directors voted to expand the hospital by adding a third story to the original hospital and by constructing a three-story addition attached to the hospital’s east end. The purpose of adding an extra floor and the annex on the east was to increase the number of patient rooms and for the first time provide a room specifically designed for surgery. A committee was formed to select an architect, to contract for construction of the expansion, and to oversee the work. The committee selected the architectural firm of A. B. Mullett and Co. of Washington, D. C. to design the renovation. When the design was approved, the committee solicited bids for building construction and heating. H. P. Cline was awarded the construction contract with a bid of $8,967. O. M. Darlington won the heating contract with a bid of $900 for steam and $1,039 for vapor heating. The board delayed a decision on whether to heat with steam or vapor. Both contracts were awarded at the end of August and called for a completion date of December 20. The hospital board announced that they were $1,000 short of funds necessary to complete the project and solicited the support of the community to raise the necessary amount. The work was completed on time, and the hospital took on a new appearance.

The final addition to Charles Town General Hospital took place in 1921. Again, the Mullett architectural firm designed enclosed porches on the second floor so that patients could take the air when the weather turned cool. For four decades, what began as Dr. Venning’s hospital continued to fulfill his mission of providing health care to all of Jefferson County.

– Doug Perks, a retired history teacher and Shepherdstown resident who serves as the historian at the Jefferson County Museum in Charles Town, is a contributor to the Spirit of Jefferson.