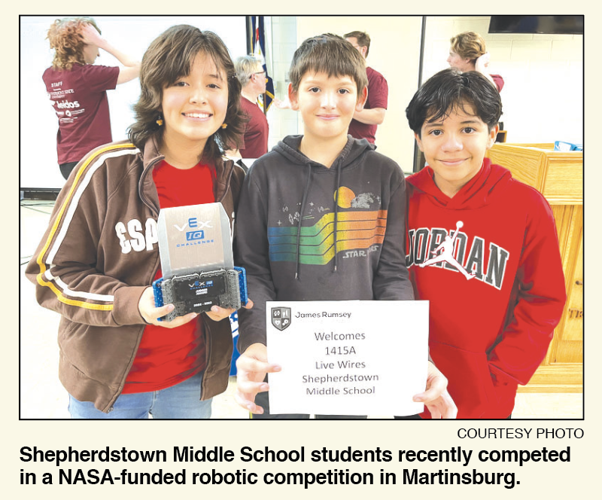 Two teams of the Cardinals Land/Air Robotics Club, a Shepherdstown Middle program, were among nine teams participating in the NASA-funded robotics competition.

The Shepherdstown Middle teams included 6th and 7th graders who called themselves The Live Wires and The Shepherds. The teams competed in eight rounds of a challenge that required them to design and build a robot that could perform a series of autonomous functions. Both teams advanced to the final round, with one winning second, the other tied for third place.

NOVEL TALK: This Saturday at 1 p.m. in Shepherdstown, authors ER Munley and Ruth Sanger will discuss their new book of fantasy fiction, “The Price of Broken Magic.” The event takes place at Four Seasons Books on West German Street in downtown Shepherdstown.

DEMOCRATS MEET: This Thursday at 7 p.m., the Jefferson County Democratic Association will gather at the Jefferson County Maintenance meeting room at 128 Industrial Boulevard in Kearneysville. The gathering will address how the party can “grow in a new direction” after the last election, according to a notice for the event.

ARTISTS FOR AUCTION: The Friends of Shepherdstown Library is inviting artists and creators of all ages and skill levels to create and donate an original work to the library’s All Arts Auction & Art Show fundraiser in March. Art forms from paintings and pottery to music and dance are welcome. The library group is providing a limited number of free canvases for those who wish to donate a painting to the online auction, which will take place from March 9-14.

Artwork and certificates may be submitted at the library through March 3. Proceeds will benefit the library. For details, FOSL website at foslwv.org or call the library at 304-876-2783.

POETRY EVENT: On Sunday at 1 p.m., poet John Berry will read and talk about his latest work, “The Broken Poem and Other Strange Ideas About God,” at Four Seasons Books at 114 W. German St. in Shepherdstown. His work explores darkness and silence, other ideas of beauty and strange new ideas about God, according to a press release about the author’s event.

COOKIE PROJECT: The Hospice of the Panhandle hopes to distribute 15,000 snacks and treats, ranging from granola bars to raisins to potato chips to candy, to its end-of-life care providers and supporters during its annual Valentine’s Day Cookie Project. Hospice is asking community members to bring in individually wrapped snacks from now until Feb. 6 to its office at 330 Hospice Lane in Kearneysville. The snacks and treats will be delivered to area physicians, hospitals, nursing homes, pharmacies and many others who help care for hospice patients and support the organization throughout the year.

AVIATION TALK: This Monday at 6:30 p.m., Roncevert “Ronce” Ganan Almond, senior counsel at the U.S. Senate Committee on Commerce, will present a free lecture on the role of Congress in addressing challenges facing the aerospace industry. The presentation will address such topics as technological innovation, workforce development and global competition. The event will take place in the auditorium at the Robert C. Byrd Center for Congressional History and Education on the Shepherd University campus.

BIOGRAPHY TALK: On Saturday, Feb. 4, at 1 p.m. in Shepherdstown, Harpers Ferry author Lynn Pechuekonis will discuss her book “Man of Sterling Worth,” a biography of the late Storer College Professor William A. Saunders. Pechuekonis operates a bed and breakfast in Saunders former home in Harpers Ferry. Her book focuses on black life both at Storer College and in Harpers Ferry during the Jim Crow era—all viewed through the lens of the professor. The book discussion takes place at Four Seasons Books in downtown Shepherdstown.

BINGO EVENT: On Saturday, Feb. 4, a bingo fundraiser for a 4-H Association camp will take place at the Shepherdstown Fire Department. Doors will open at noon. Bingo will begin at 2 p.m. $20 to play. For information, call 304-876-6686.

MODEL TRAINS: On Saturday, Feb. 11, from 9 a.m. to 1:30 p.m., the Hagerstown Model Railroad Museum will hold a model train sale at the Washington County Agricultural Center on Route 65 near Sharpsburg, Maryland. The event hopes to promote the model train hobby. Proceeds will help support the restoration of the historic Antietam Station on Shepherdstown Pike. Visit the website antietamstation.com.

ARTIST MARKET: On Saturday, Feb. 11, from 11 a.m. to 5 p.m., 37 artists will offer handmade gifts in time for Valentine’s Day at the War Memorial Building at 102 E. German St. in downtown Shepherdstown.

GARDENING TIPS: On Friday, Feb. 17, at 6 p.m., the Bolivar-Harpers Ferry Public Library will hold a free workshop on garden seed preparation. A master gardener will offer a step-by-step process and tips for growing thriving seedlings this spring. Walk-ins are welcome. Call the library at 304-535-2301.

STORYTELLING PERFORMANCES: On Tuesday and Wednesday, Feb. 14-15, at 7:30 p.m., adult storytelling performances by Priscilla Howe will take place at the newly renovated Shepherdstown Opera House in downtown Shepherdstown. The Feb. 14 performance of the Speak Story Series will feature “The Story of Tristan and Iseult: A Medieval Classic,” a tale of good luck, bad choices, giants, dragons, fools, betrayal and, of course, romance. Tuesday’s performance will also be broadcast online. A different, yet to be announced performance will take place on Wednesday.

CHILI TASTING: Before the big game on Sunday, Feb. 12, the Knights of Columbus will hold a chili bowl tasting fundraiser at St. Agnes Catholic Church in Shepherdstown.The tasting, which includes selling raffle tickets to support seminarians, will be in the church’s parish center after 10:30 a.m. mass. Chili cooks are still sought for the event to compete for prizes. If interested in cooking, contact Arnold Thomas  at 7 p.m. at Arniet151@gmail.com.

PHOTOGRAPHY EXHIBIT: A photography exhibit titled “Life Is Beautiful” featuring the work of Tina Snyder will be displayed through Feb. 28 at the South Jefferson Public Library in Summit Point.

SCIENCE STANDOUTS: Three students from Jefferson County who attend Saint Joseph School in Martinsburg presented science fair projects at the Berkeley County Science Fair on Saturday, Jan. 14, that were selected to advance to a regional academic competition. An astronomy and physics project “Flight School” by Molly Pentony of Shepherdstown received a first-place award and advanced to the regional competition. An engineering project “Which Catapult Design is Best” by Charles Bohrman of Charles Town won a second-place finish to advance. A biology project “Whose Mouth is Cleaner” by Jaxson Guenther of Shepherdstown took a third-place recognition to advance. Stella Carter of Charles Town received an honorable mention in earth and environmental science for “What Type of Fertilizer Helps Plants Grow Taller?”