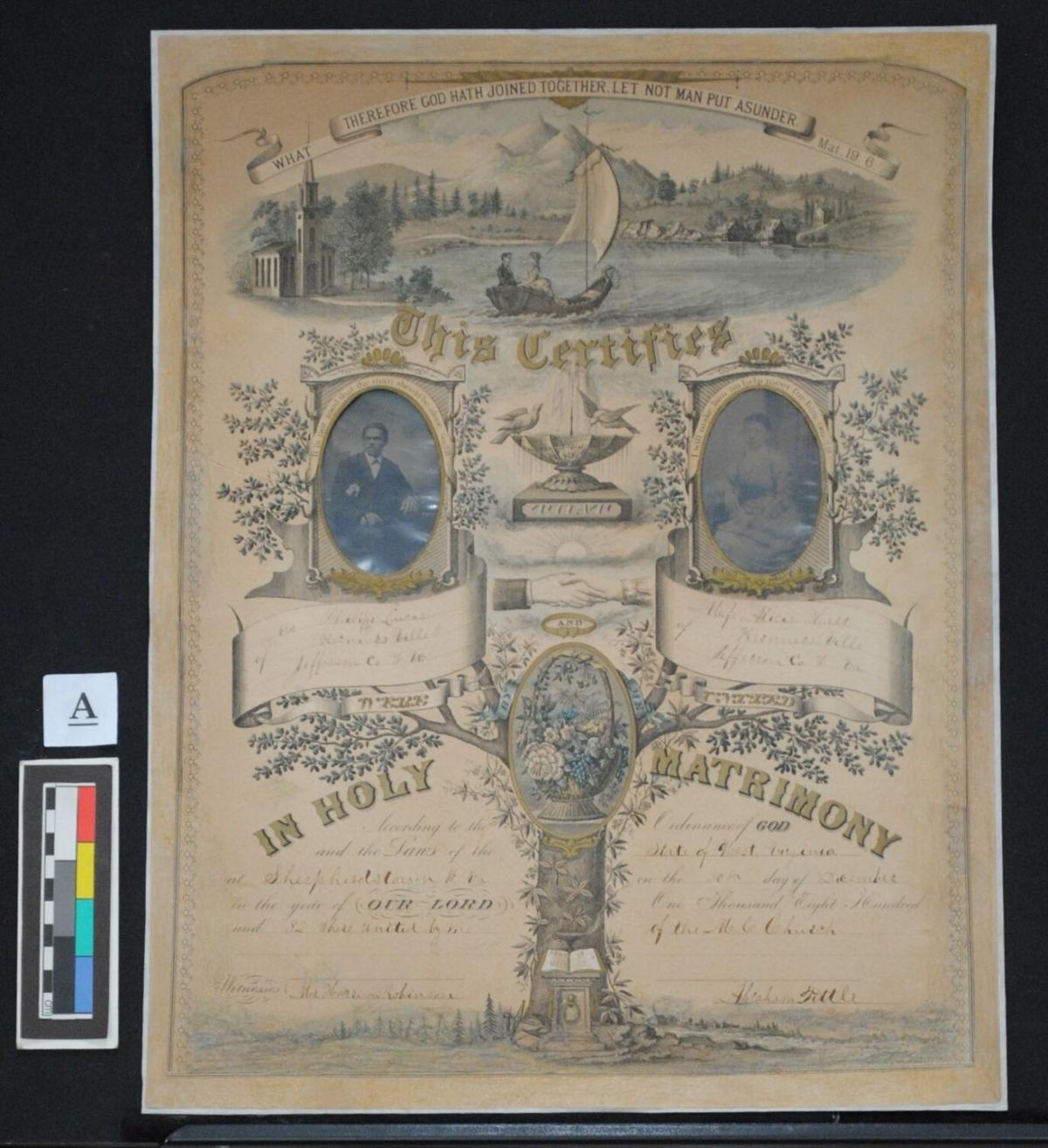 Above, the 1882 marriage license between Alice Hart and Phillip Lucas is seen. 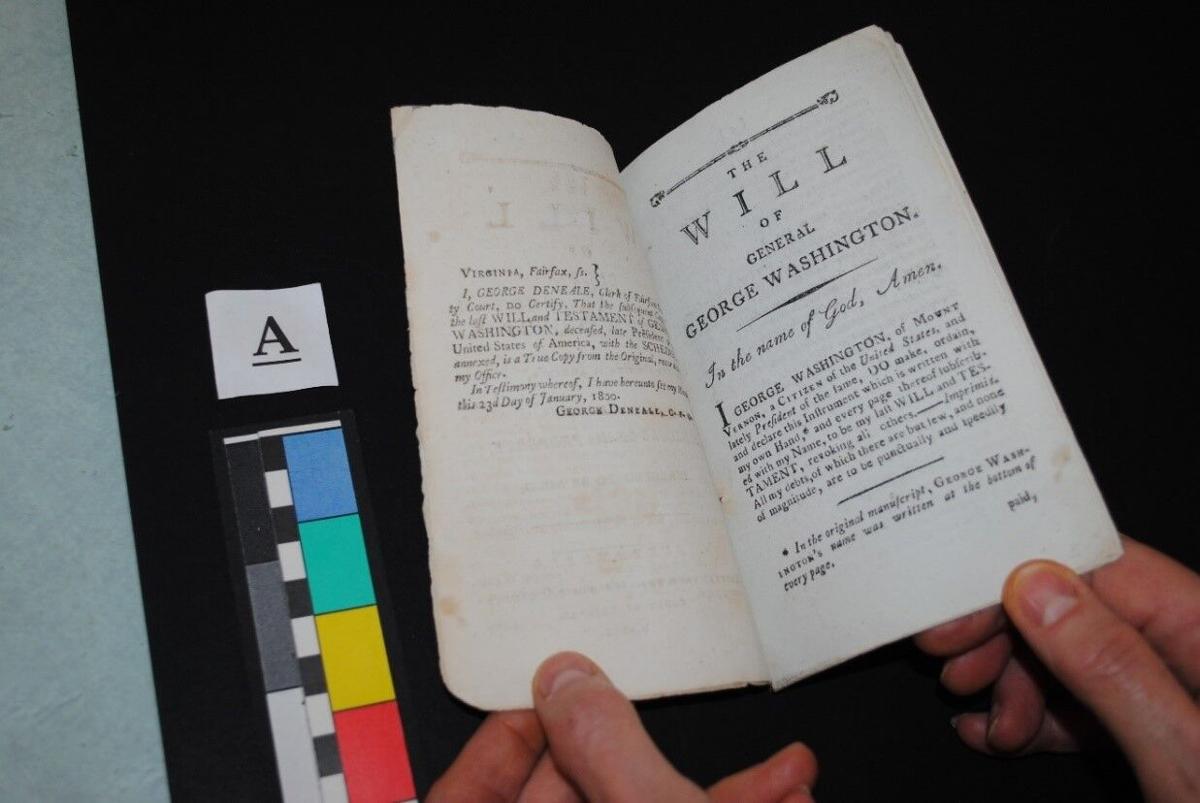 Above, the first-edition version of George Washington’s will is seen.

Above, the 1882 marriage license between Alice Hart and Phillip Lucas is seen.

Above, the first-edition version of George Washington’s will is seen.

They say that a photo can be worth a thousand words.

But a marriage license from the 1800s? Even more so.

Dr. Shelley Murphy, a relative of the Hart family, donated the certificate to the museum.

Alice Hart’s brother is Howard Hart (Kearneysville) and he married Arwilda (Goens/Goins), who is the daughter of Joseph and Lucy (Sims). Joseph is the brother to her (Murphy’s) second great-grandmother, Mary C. (Goens/Goins) Marsh.

The conservation of the marriage certificate, along with an 1800 first-edition copy of George Washington’s will, were both performed by Cleveland Conservation of Art on Paper. The Calamara Fund of the Eastern West Virginia Community Foundation paid for the work, which cost $1,000.

The copy of George Washington’s will is one of fewer than five thought to have survived from the first printing. Cornelia Helbold Haden Brewer, a sixth-generation descendant of Charles Washington, donated the will to the museum after it had been in the family for generations.

Sarah Huston, the Jefferson County Museum Curator, lauded the conservation work performed on the documents by Rachel-Ray Cleveland, the proprietor of Cleveland Conservation of Art on Paper Inc.

“We are thrilled with the restored documents. They were remarkable to begin with but now are simply stunning,” said Huston. “Cleveland Conservation expertly restored the faded soiled, and damaged documents, ensuring their stability for years to come.”

Jane Rissler, the director of the Jefferson County Museum, explained some of the damage that the documents had prior to the work.

“This had termite damage, the colors were faded,” Rissler said.

Rissler added that the mere fact the photos of Alice Hart and Philip Lucas have survived all these years was a miracle.

“But the incredible thing is that those tintypes somehow stayed with that document,“ she said. “One was still attached and the other was loose. That’s really lucky.”

Right from looking at the Lucas-Hart certificate, you can tell that the couple was of high standing, due to the tintype photos included on the document. Such work was extraordinarily expensive back then. As a result, very few marriage licenses from the 1800s have them and even fewer African-American marriage licenses have them.

While the couple may have been of high standing in the community, that’s not to say that they didn’t have their fair share of hardships.

They had eight children in 16 years, none of whom survived to adulthood. The pain they endured from that alone had to have been agonizing.

In the Kearneysville Cemetery, also known as the Hart-Lucas Cemetery, lies two of their children, Delia Virginia Lucas, and Julia Martha Lucas. Delia died at the age of four in 1889 and Julia died before seeing her first birthday in 1901. Alice Hart died shortly thereafter in 1903 at the age of 41.

And adding to the heartbreak, Alice Hart died before her father, Mascena Hart, who passed in 1905. Alice Hart’s mother was Sarah Roper Hart.

Mascena Hart was a stone mason and an important community figure and was believed to be the namesake for a small community in Kearneysville, called Hartstown.

Mascena Hart, along with John H. Fox were the pioneers for African-American community in the area. Hart was born a free man and Fox was born a slave, but later rose to high stature as a community leader and a philanthropist.

According to a piece by Addison Reese in the Shepherdstown Observer, Mascena Hart purchased the first lot in what became Hartstown and ran a grocery store for the community.

Fox had been enslaved on Dandridge Farm in Kearneysville and earned his freedom by enlisting in the Union Army during the Civil War.

During those times, the success of a community was often determined by whether there was a church.

The people of Hartstown worked hard to become self-sufficient and to succeed and leave something behind for the generations to follow. These families reached their goals by working with and relying upon one another.

In Elsie Hamstead’s 2000 book, “One Small Village: Kearneysville 1842-1942,” some of the histories of Hartstown families are outlined.

Hamstead explained that Hartstown is a unique example of some of the small communities in Jefferson County after the Civil War:

“While Kearneysville was not unique among small communities, one notes with satisfaction the industriousness of its people and the rich mix of cultures and backgrounds. Separate schools for the races were established in 1872. Afro-Americans and Euro-Americans built their own churches as well, and only on special occasions did the two races attend social functions together. But it was in the home setting that association of cultures could be seen as a community. Although this was true of Kearnesyville, it was particularly true of Hartstown, where families of various races lived side by side.”

Hartstown was located adjacent to the B&O railroad. Many of its citizens worked at local orchards, the quarry or with the railroad.

The time between the end of the Civil War and the turn of the century was a time of great change, especially for the communities in and around Kearneysville. Some folks moved out. Others moved in from surrounding states and found work and sense of community.

NOTE: The Jefferson County Museum was founded in 1965 with the mission to preserve the history and heritage of the county. Its extraordinary collection encompasses a wide range of artifacts and documents from early Native American activities and European colonization in the 1700s through the 21st century.

During the COVID-19 pandemic, the museum is open by appointment. Visitors are to set appointments at least 24 hours in advance by calling 304-725-8628 between 11 a.m. and 4 p.m. Tours are available Mondays, Tuesdays, Thursdays and Fridays.

Admission is currently waived, but donations are greatly appreciated.