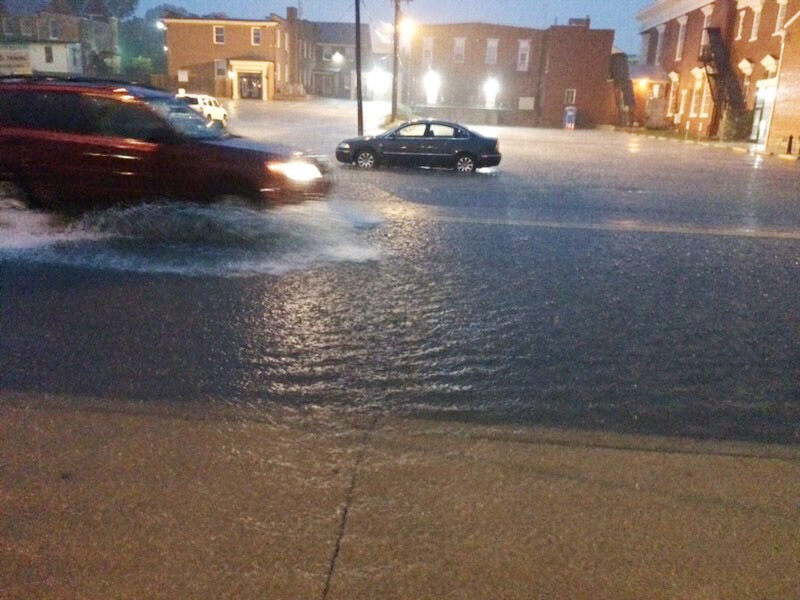 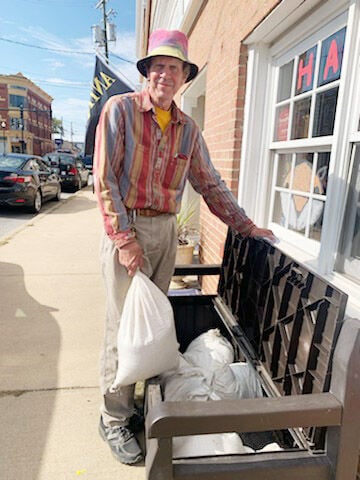 CHARLES TOWN – Richard Wahl keeps sandbags ready under a bench next to the front door of his East Liberty Street vintage furniture shop.

That’s because when it rains it sometimes pours — right into the first floor of his downtown shop, Art Deco Dekor.

“We get these surges,” he explained. “Several times a year it could potentially flood.”

Several times a year, Wahl has to scurry out of bed and to his shop during the middle of the night to stack up the sandbags during heavy rainstorms. He doesn’t always make it in time.

“I’ve had to tear the carpet out,” he said, because of the flooding problem.

Charles Town officials are taking early steps to address stormwater flooding along the block of East Liberty Street running in front of the Charles Town VFW to behind the Jefferson County Courthouse.

The city is applying for a federal Chesapeake Bay protection grant that they hope will pay most of the estimated $186,000 cost to design a stormwater fix for the street, the first of several anticipated efforts to improve stormwater drainage on Charles Town’s downtown streets.

On East Liberty Street, rainwater that sheds off nearby parking lots and other surrounding paved surfaces has long collected at what is an area low point near North George Street, city officials said. Heavy rains cause shin-deep pools to flow over sidewalks and sometimes against and into buildings such as the Art Deco Dekor shop.

“The drains are higher than where the water is pooling at the moment,” he said.

One option that will be considered is adding roadside plantings or other stormwater control features to slow the rainwater runoff before it reaches the street and the city’s underground sewer system, Hennessy said.

Hennessy said he has reached out to county officials to see if they might help with stormwater runoff from the county park lots off of East Liberty Street. Unusually heavy rainfall over the past couple of years has made the problem more noticeable, he said.

Charles Town Councilman Todd Coyle grew up on the street and now lives a block away from where the flooding occurs. He voiced friendly skepticism that solving the longstanding problem would be quick or easy.

“It’s always been a flood zone,” he said. “It’s worse now than it was then, but I can remember it was always a flood zone.”

Coyle recalled years ago when he and other neighborhood children would romp around in the flooded street after heavy rainstorms. One time a giant snapping turtle lumbered from the city’s sewers after a rainstorm to delight the kids and alarm the adults, he said.

“When it rains it can be five or six inches deep,” he said of the street flooding. “Besides being a real hazard for vehicles, it’s also [flooding] some of the businesses on the street.

The city already hired Greenway Engineering to examine and survey the downtown’s stormwater infrastructure, which includes underground brick conduits that are about four feet square that were built about a century ago.

Stormwater from the downtown eventually funnels into Evitts Run creek, a tributary of the Shenandoah River.

Hennessy said the survey work on the city’s downtown stormwater system found no major problems. But he and Coyle, a member of the City Council’s street committee, said improving troublesome stormwater flows in different downtown locations will take time and money.

The system survey work cost $64,000. Construction estimates for the East Liberty Street improvements won’t be known until after the design work is completed. And city officials are hoping the federal grant for that work will come through.

“There’s a lot of those kinds of problems all over the city,” Coyle said. “This is just starting the process. We can’t do all of it at one time.”