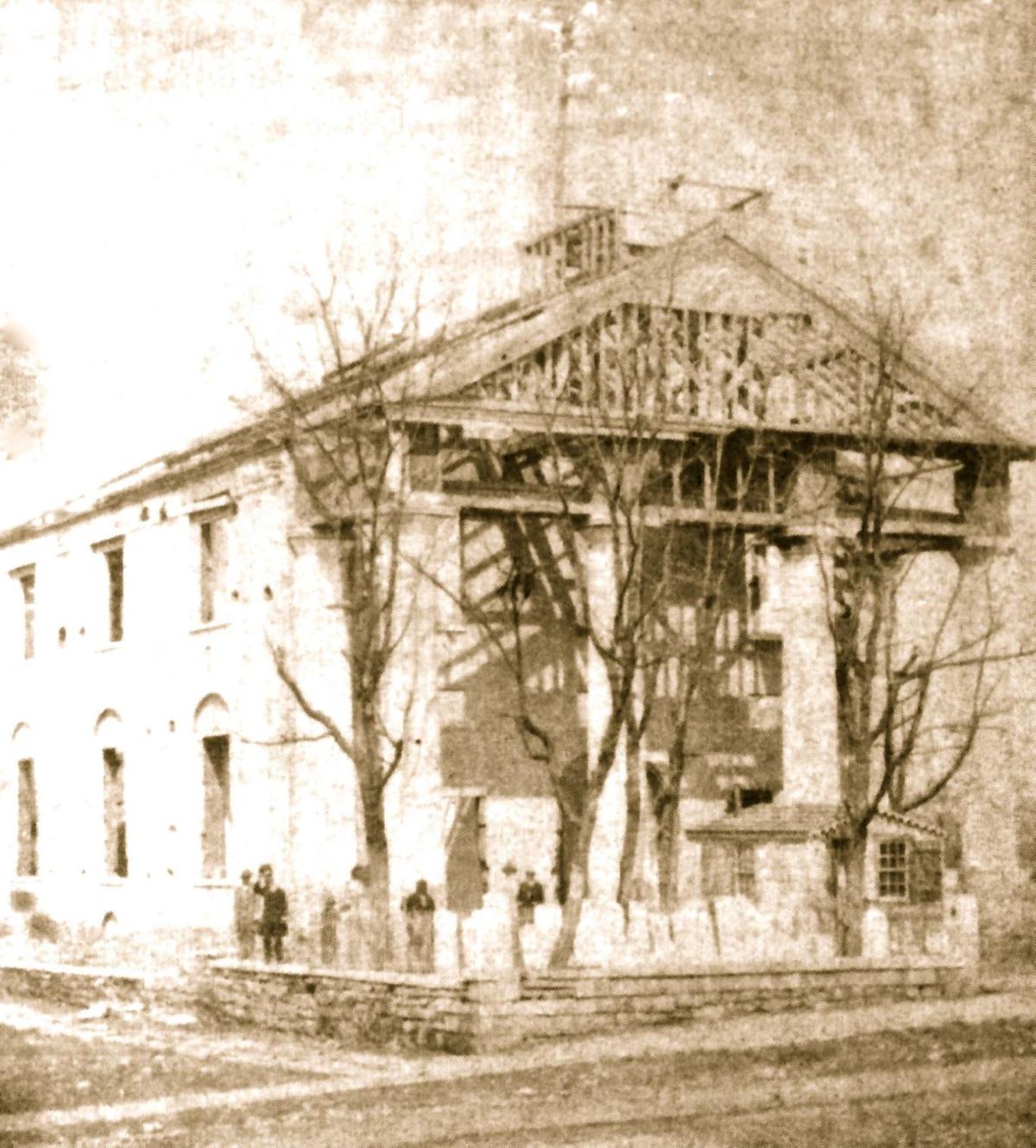 In October of 1863, Confederates shelled the Jefferson County Courthouse – with Col. Benjamin Simpson and his U.S. troops inside – creating such damage that the building could be used only as a stable 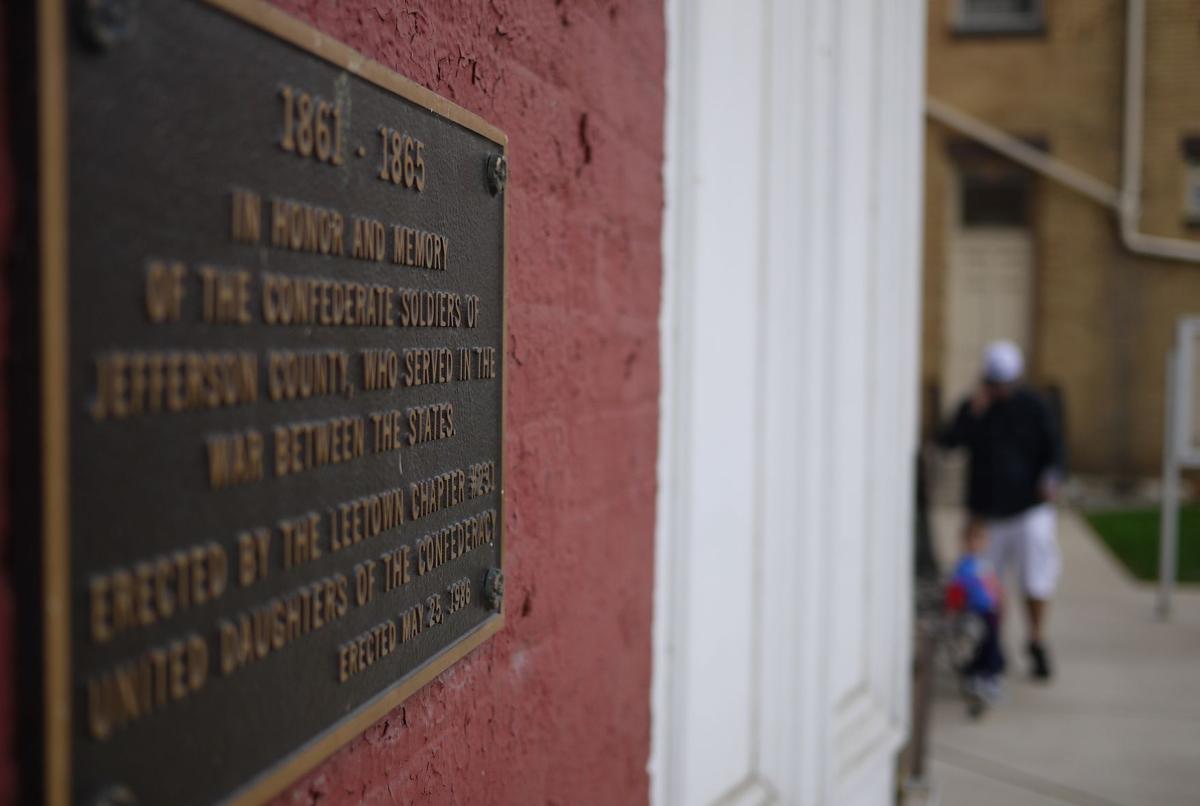 The plaque thanking Confederate soldiers from Jefferson County was placed at the entrance of the historic courthouse in 1986 after then-JCC President Garland Moore accepted it from the Leetown chapter of the United Daughters of the Confederacy.

In October of 1863, Confederates shelled the Jefferson County Courthouse – with Col. Benjamin Simpson and his U.S. troops inside – creating such damage that the building could be used only as a stable

The plaque thanking Confederate soldiers from Jefferson County was placed at the entrance of the historic courthouse in 1986 after then-JCC President Garland Moore accepted it from the Leetown chapter of the United Daughters of the Confederacy.

The historic courthouse in Charles Town where slavery fighter John Brown was found guilty and sentenced to die in 1859 no longer boasts a plaque from the United Daughters of the Confederacy at its entrance.

By a 3-2 vote on Thursday, the Jefferson County Commission agreed to take down the marker and return it to Polly Wharton, a leader with the UDC in the county who’d joined Charles Town native Linda Ballard and other African-American citizens a year ago in asking for its relocation.

By Friday, the small plaque paying tribute to county men who went to war so that slavery would continue had been removed.

And then a majority of citizens in Jefferson County voted in May to keep Tabb rather than her plaque-supporting opponent Jack Hefestay and then on Nov. 6 to replace Onoszko, a conservative who said he viewed the marker as a fitting tribute to war veterans, with former county prosecutor Ralph Lorenzetti, who announced in the early days of his candidacy that he wanted to see the plaque come down. And so on Thursday, Lorenzetti joined Noland and Tabb to finally reverse the decision the JCC made more than a year ago to keep the plaque in place.

The fact is, that plaque never should have gone up on the courthouse. Arguing that the plaque is a war memorial for veterans contorts logic; the plaque actually is a mockery of what happened in Jefferson County when the nation split apart over the question of African-Americans’ future as people, not property.

If the UDC’s plaque had praised Confederate soldiers along with the men from the county who went to war to preserve our nation – including the 176 African-American men from Jefferson County, including many newly freed from slavery – then the debate over the plaquemost likely would have been quite different.

Nationally, since the start of the UDC in 1894, the group’s goal has been to elevate the Confederacy in the minds of Americans – hoping that we’d come to see the conflict not as a war over the enslavement of our fellow men, women and children but rather as a battle between equally worthy sides of America, both North and South fighting for valuable ideals.

But the signs carried by many of the protesters who gathered in early October outside the courthouse reading “No tributes to slavery” get it exactly right.

Why praise Confederate soldiers, the men who fought to preserve slavery, on a public building in our community? Why allow that message to greet those walking into the courthouse to register to vote, to cast a ballot, to stand trial, to serve as a juror, to research family records or for other needs.

And the plaque also got the history wrong.

The courthouse today stands despite the best efforts of the Confederates. Led by John Imboden, an artillery commander born in Staunton, Va., Confederate soldiers on Oct. 18, 1863, surrounded Col. Benjamin Simpson and his U.S. troops inside the courthouse, shelling it so thoroughly that afterward the building could be used only as a stable.

The courthouse records had been moved to Lexington, Va., just before the start of the war, but the building itself had to be rebuilt. What is now McMurran Hall in Shepherdstown functioned as the county courthouse from the war’s end until 1871.

It’s interesting to note that after the courthouse in Charles Town was restored, the area downstairs where John Brown’s trial had been held – the room where citizens from all over the county come to cast ballots during the early voting period – is adorned with framed portraits of Robert E. Lee and Stonewall Jackson, the Confederate leaders depicted in so many statues put up across the former Confederacy with the hope that African-Americans would forever see themselves the way these Confederates did.

Why in 2018 would a portrait, much less two portraits, of these men be on display in an official room in our courthouse?

Enough of the tributes to slavery. Let’s move on.