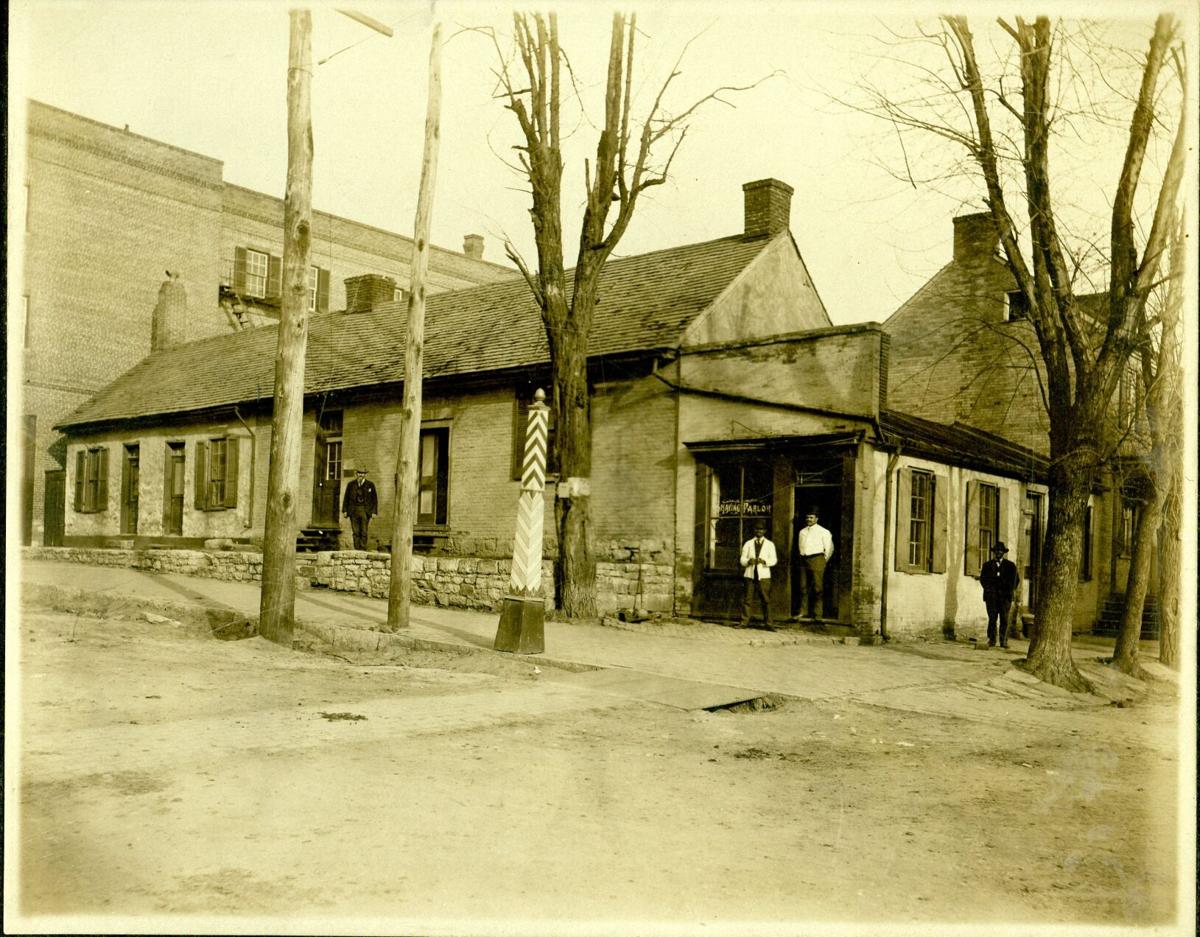 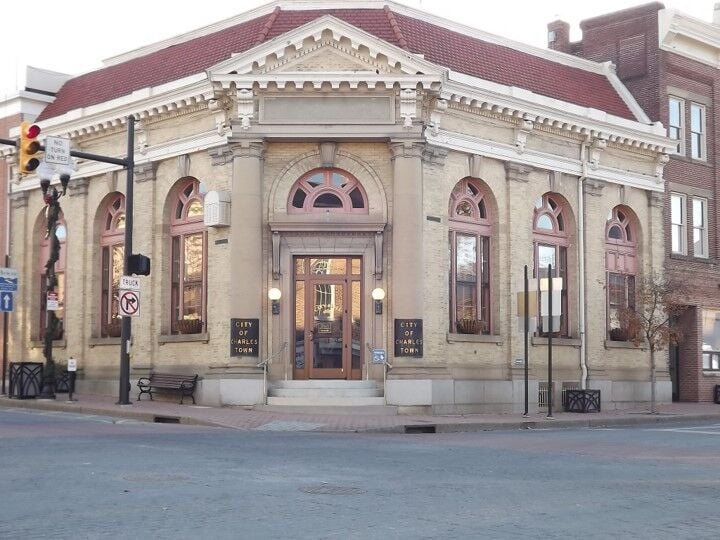 City of Charles Town building in 2012. 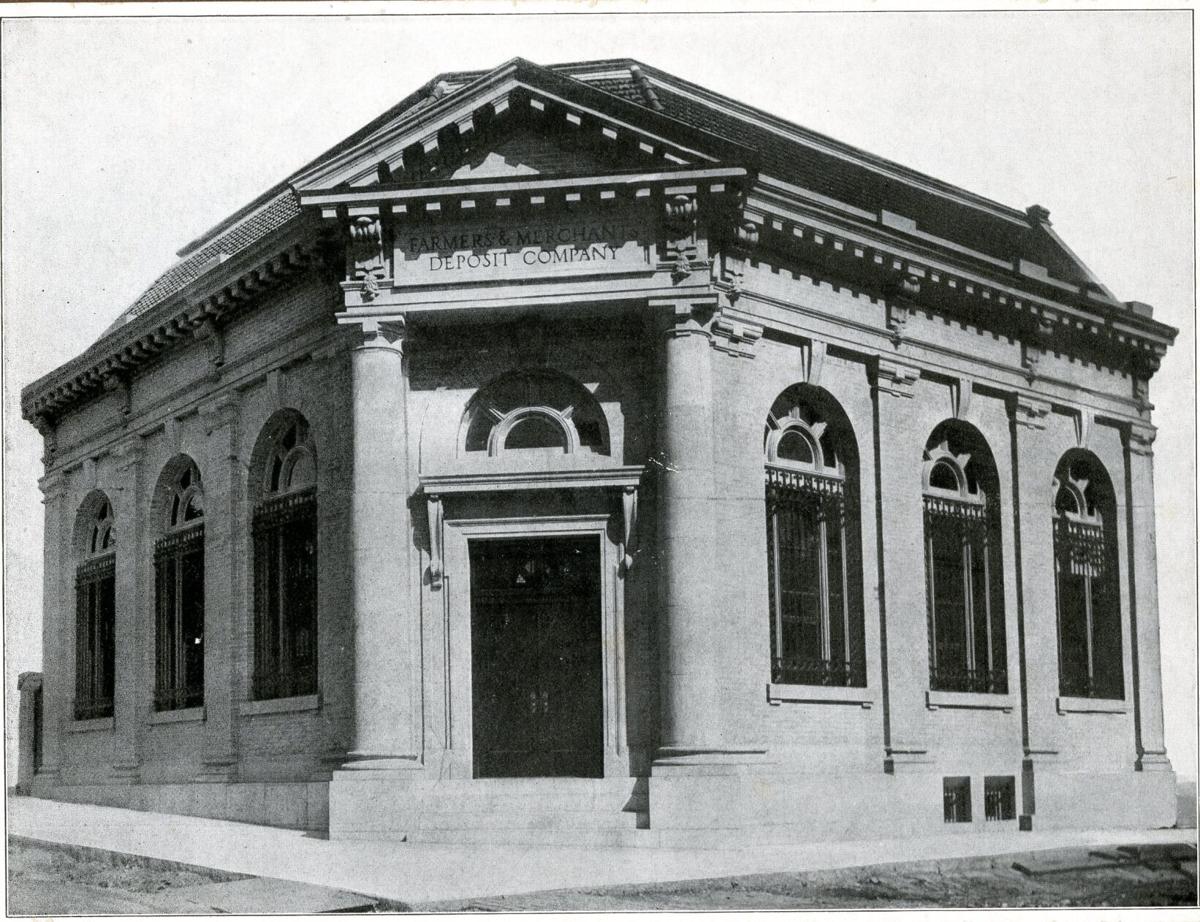 City of Charles Town building in 2012.

Jefferson County’s first Board of Supervisors moved quickly to put buildings on each of Public Square’s four corners. Of course, the Court House was built first and by 1803, hosted both the Supervisor’s meetings and court trials. Occasionally, court trials necessitated that someone had to serve time, so logically, the County Jail was the second building built. It’s unclear whether the Supervisors decided to build clockwise around Public Square or whether it was just a random decision. The first County Jail was built on half of Lot No. 53—directly across the street from the Court House. So originally, prisoners who received a jail sentence walked out the front door of the Court House and headed directly across Washington Street to serve their time in the county lock up. The County Jail was there for three years.

When in 1806, the Board of Supervisors decided to build a new County Jail, instead of building it on Lot No. 53, they decided to build the new jail across George Street from the old jail on one half of Lot No. 44 — the southwest corner of George and Washington Streets, where the United States Post Office is located today. Fifty-three years later, this building held John Brown and six of his men while they were first tried and convicted, and then awaited the execution of their sentences.

We do not know whether the building which housed the first jail was renovated or removed, but we do know that Jefferson County’s Circuit Clerk and County Clerk had offices in a one-story limestone building on Lot 53. For the next thirty years, the Circuit Clerk oversaw the operation of the county’s judiciary and the County Clerk recorded the county’s official documents from this location.

In 1836, the Board of Supervisors decided to tear down the original Court House and replace it with a new building which when completed was described as a “Doric temple in the Greek revival style.” Both clerks moved across the street and had offices either in the Court House proper or in the Court House yard—more research is required to determine exactly where they were housed. This move made the old clerks offices surplus, so on September 8, 1837, a “Majority of the Justices of said county” sold “the same in part now occupied by and upon which is situated the clerks [sic] office of the viz. Sup. Court of Law & Chancery for said county.” The sale was made to Charlestown Attorney Andrew Hunter, who paid $466 dollars “current money of the United States” for the clerks’ offices. Presumably, proceeds of the sale were used in part to offset the cost of the new Court House. It is interesting to note that on August 21, 1838, the sale was authorized by the Virginia General Assembly, which ordered the Jefferson County Clerk to “affix the Seal of this Court” to the deed, making the deal official.

Hunter improved the building with a one-story brick addition, which contained two additional office spaces and a commercial bay on the building’s west end. Merchants and attorneys advertised that they “occupied one of the rooms in Mr. Andrew Hunter’s Row, opposite the Court House.” In 1854 tailor John Reed advertised that he had for sale “his stock of Ready Made CLOTHING, which he offers to sell very low for Cash.” Law partners Edward Esten Cooke and Andrew Eskridge Kennedy shared office space in Hunter’s Law Row on Public Square in the heart of downtown Charlestown.

Hunter was one of several Charlestown attorneys impacted by the West Virginia law which prohibited anyone who either fought for or supported the Confederate States of America during the Civil War from acquiring a license to practice law. This may have influenced his decision to sell Hunter’s Row. Advertised in the Spirit of Jefferson as “VALUABLE Charlestown Property For Sale,” Hunter divided the lot into two parcels, the first of which was the “lot of ground adjoining the Carter House.” The Carter House was Charlestown’s preeminent hotel and occupied the lot where the Bank of Charles Town is today. Hunter’s lot adjoining the hotel was the original clerks’ building, and in October 1875, the Spirit of Jefferson reported that Joseph Starry paid $750 “for part of a part of ‘Hunter’s Row’ – 20 feet front, including the office occupied by A. E. Kennedy, Esq.” In 1872, the act preventing his practice of law was repealed, and Hunter retained possession of the second parcel on the corner of “Main and George streets,” until his death in 1888.

Andrew Hunter was survived by two daughters, Mary Elizabeth Hunter Kent and Florence Hunter. With their father’s passing, they jointly inherited the office building on Public Square. An 1896 photograph captured the occupants of Hunter’s Row. The Barber Shop on the corner was operated by James H. Thompson, who advertised that he had the “Latest Improved Chairs” and that “everything will be kept neat and clean.” In the photograph, Thompson’s Barber Shop is the last building on the right and Thompson is standing on the on the sidewalk. His assistant barber, Walter Moten, is standing in the doorway behind Thompson. The man standing to the left of the barber shop is Thomas Rutherford Moore, Sr. For several years, Moore operated his insurance agency in “the Hunter Building, Opposite the Court-House” where he represented several national insurance firms.

Hunter’s Row left the family in October 1905, when Florence Hunter and her nephew, Andrew Hunter Kent, sold “those certain lots of land on the corner of Washington or Main and George Streets, now platted as one lot” to the Farmers and Merchants Deposit Company for $10,000. Farmers and Merchants Deposit Company succeeded the First National Bank of Jefferson, which was organized in 1871 and ceased operation in 1904. As a provision of the sale, the Hunters granted the current tenants an additional year of residence. During the interlude, Robert Chew, the bank’s president, began making plans to move the bank to its new location on Public Square. Deciding to start anew, the bank’s directors hired the Washington D. C. architectural firm of A. B. Mullett & Sons to design a modern bank building. In the spring of 1907, Charlestown bid farewell to Thompson’s Barber Shop and T. R. Moore’s Insurance Agency, and the old office building was torn down. In its place, Marshall J. Rohr, a Washington D. C. contractor, began construction of “a handsome new bank building,” and Cashier Samuel Lee Phillips opened the door for the first time in late summer 1908.

In 1932, Farmers and Merchants Deposit Company merged with the Jefferson Bank & Trust Company to form the Farmers Bank & Trust Company. The new bank maintained its location on Public Square. In September 1937, Farmers Bank & Trust Company closed its doors and its directors turned the bank over to state banking officials and Commissioner George Ward was placed in charge. To liquidate the bank’s assets, the bank building was put on the block on Saturday, January 15, 1938. The sale took place across the street in the front yard of the Court House, and at 9 a.m., auctioneer Preston Engle called for bids on the bank building. The opening bid was $20,000 offered by William Lasiu “Lacy” Gibson, Cashier for the Bank of Charles Town. The next bidder, unnamed and representing a group of potential bankers, bid $25,000. After they each fired shots across the bow, the two bidders hit the brakes and each succeeding offer slowly increased until Gibson offered $40,000 which was not countered. Auctioneer Engle brought the hammer down, and The Bank of Charles Town was on the way from its current home at 231 West Washington Street to a more prominent location on Public Square.

The Bank of Charles Town made its home on the corner of George and Washington for the next three decades. As the bank continued to flourish, it outgrew the building on Public Square and in 1965, they purchased the Hotel Thomas Jefferson, which had replaced the Carter House. After removing the old hotel building, they built a new more modern facility where they are today, at 111 East Washington Street.

Lot No. 53 on Public Square, as intended by Town Founder Charles Washington, is yet again the site of a public building. Today, the offices of the City of Charles Town occupy the southeast corner of George and Washington Streets. I am sure that The General’s youngest brother would approve.